In a startling display of irrational hostility, Donald Trump accidentally beat himself up in front of a raucous crowd during a rally in Phoenix, Arizona today.

While most of his speech was a repetition of familiar statements about his strong poll numbers, building a wall and making Mexico pay for it and claiming China, Japan and all other U.S. trading partners were “killing us”, he started espousing conflicting views on the occurrence of violence at his rallies.

Trump began addressing the mounting violence at his rallies by claiming that there was none and his supporters were peaceful. “We have a great time at my rallies, don’t we?! The people who come to my rallies are good people, believe me, great people who are as peaceful as they are uneducated,” Trump insisted to loud and oblivious applause. “It’s the protesters who come here looking for violence, not us.”

Trump then turned on himself, “Come on, we’ve had enough of political correctness! What I miss is the old days, when you could just punch a protester in the face if you didn’t like what he said. We need more people put in comas by politics, not less!”

Trump then shook his head at himself. “Now you’re lying, I’ve never said that, I’ve never promoted violence at my rallies, there is no violence at a Trump rally, believe me.”

His disagreement with himself became more heated and escalated into his roughly pushing himself around the stage before sucker punching himself. After knocking himself to the floor,  Trump yelled at himself, “You’re  horrible! Really horrible! You’re the biggest liar I have ever seen and I’ve seen plenty!”

The packed crowd looked on silently in bewilderment as Trump continued berating and slapping himself. Then, like a domino effect, it spread among the Trump supporters in the audience who began mimicking his behavior and enthusiastically beating themselves up and hurling vicious and bigoted insults at themselves while protesting that they were non-violent.

Secret Service officers eventually snapped out of their disbelief and wrestled with each other as some of them tried to restrain Trump from beating himself up while the others tried to hustle him out of the arena.

Hours after the chaotic rally ended and the crowd finally dispersed, Trump tweeted on his Twitter account, “Great rally today in Phoenix! Confident now, no one can beat me…except me!”

Bernie Sanders comes out at 70 percent “True” (fully “True” at 24 percent). Sanders’ challenged statements have rated out as “False” or “Pants on Fire” 15 percent of the time.

Donald Trump comes out at 23 percent “True” (fully “True” at 3 percent). His challenged statements have rated out as “False” or “Pants on Fire” 61 percent of the time.

What this data means is for you to decide…

Wow…Trump is actually — for once — telling the truth when he says that Cruz is the biggest liar of all time!

That score sure seems high for Trump…still trying to think of something true he’s ever said. Oh, he called Cruz a liar…but he would have said that about whoever runs against him anyway.

A song about Donald Trump:

Thanks James! My pleasure!

Ad, your article made me think of this classic.

Now if Trump beat himself up in an interview, it might look a little something like this:

Thanks Beatlex! The thought does put a smile on one’s face!

Here’s a picture of Donald Trump assaulting himself: 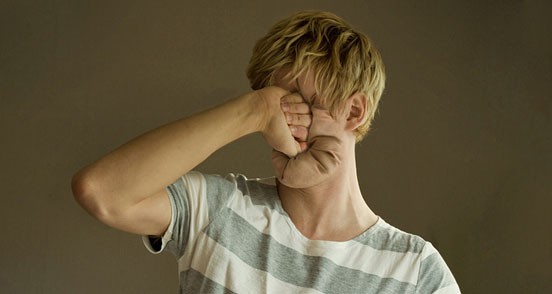 I don’t know how you do it AdLib. How do you manage to take comedy and make it sound as though it could actually be true. I pictured the events happening as you laid them out. Yes, I said to myself, that’s plausible, this guy is so full of himself, I could see him actually starting something with himself and ending up getting the worst of it in the end. Loved the part where he sucker punched himself, wow could I visualize that happening. Somehow in my visualization his body guards were on lunch break and were not able to stop the attack before he accidentally detached that part of the fluff on his head that is sewn in or pasted on. Oh, it was quite an event (in my mind of course). Thanks for the laugh. However; as I said, this may seem far fetched but I could actually see it happening. 😀

Monica, the republican party is self destructing all because of trump. I love it. There is not one candidate who can hold a candle to Bernie!
Also there is still half the country to vote yet. Bernie is going to do better with the rest of the country.

That is my hope Nirek, I’ve got fingers, toes, and legs crossed hoping he somehow pulls it out in the fall.

Thanks so much, monica!

I like the idea of him pulling his own mop of hair off…perhaps to reveal it’s a very calm and artfully styled Pomeranian?

The allegory sure seems true to me, he is his own worst enemy and while his hatred is attracting the narrow minded, desperate white people out there, he is sealing his fate with women, Latinos, African Americans and young voters among many others, to oppose him in Nov.

He is beating himself up and he is too clueless to realize it…thank goodness.

Monica, you know what they say about a man with a small vocabulary…he can’t be trusted.

I think it says less about Trump than the gross stupidity of his followers that they believe his obvious BS.

It does seem like it’s a conflict that’s not just Repubs vs. Dems, bigots vs. pro-equality but also the stupid vs. the intelligent.

The intelligent in the GOP are on the same side as intelligent Dems in seeing through Trump’s snake oil act and despising him. On the other side, if you’ve seen interviews with his followers, are the least educated, most ignorant rubes you’ve ever seen. They buy into such an obvious huckster, products of the deteriorating educational system that Repubs have been bringing about through cuts.

It’s really sad what politicians have done to this nation and the people of this nation. I used to think that the media and political influence had very little to do with the dumbing down of America. Not so sure anymore. It appears there was a goal behind what they were attempting to do. First make them ignorant, next take their homes and jobs, final straw, place them in so much debt they don’t have time to complain and Voila we back in the days of slavery. Ain’t it great!

AdLib, here’s another guy who completely agrees with you!

Ben Carson insists that there are two (at least) Donald Trumps.

I sure wish Tim Reid would do another skit on him. Maybe on SNL or something. The one he did was perfect. 🙂

Funny you mentioned that, I just watched it again this morning. Made my day! 😉

Where can I find it so I can bookmark it. I’d like to watch it again. 😀

Which Ben Carson agrees with which Donald Trump? The belt buckle stabbing Carson or the grain-filled-pyramid Carson?

I think there are more than two Ben Carsons. The guy is kind of like Sybil!

Kind of like? If he were female I’d say that is Sybil. LOL! 😀

As what? A grain counter? A lobotomy terrorist wearing a uuge belt buckle?

Ben Carson: I Didn’t Want To Endorse Trump, But He Promised Me A Position

Heh! Great minds think so much alike, look below!

That’s funny! 🙂 I just copied that from Friday’s MB updates.

If Carson hoped to leave a lasting impression, he succeeded. Now he will always be remembered for grain storage, the belt buckle, falling into a daze during those mind boggling debates and talking gibberish. What a legacy. 🙄

Your article was funny because that’s how crazy this all is, AdLib. Your humour keeps me sane.

This isn’t, and the extent of violence on the map is scary. Trump should be careful that he doesn’t become a victim himself. His son has already received a suspicious letter. What goes around, comes around.

How Trump Has Inspired Violence Across The Country, In One Map

Yes, Trump and his minions are totally clueless that raising an atmosphere of hatred can cause it to be turned on themselves (as my parody illustrated).

It’s of course the wrong thing to do but not surprising that those they’re hating against might send faux-anthrax letters are get into fights with them at campaign events.

Hate is a boomerang, no matter how hard you throw it, it always comes back.

The network issued a correction and said it was looking into the matter, calling the interview a “de

Republicans Won Blue-Collar Votes. They’re Not Offering Much in Return.

Party leaders want to capitalize on Donald Trump’s appeal to the white working class. But in recent

Justice Dept. Backs Away From Trump Era but Is Still Expected to Test Garland

President Biden blessed the plan to lower the income cap for Americans receiving checks of up to $1,

A day after President Biden said teachers should be prioritized for vaccination, the first lady and

Maj. Gen. William J. Walker testified that he did not receive permission to deploy troops for hours

The omnibus voting, ethics and campaign finance bill would roll back barriers to voting enacted by R

Lt. Gen. Russel Honore has shared his independent review of security at the US Capitol with Congress

Here's what we know about the Senate stimulus plan

Democrats' final effort to pass the $1.9 trillion relief hasn't been easy. Here's what happens next.

Myanmar coup: 'Everything will be OK' teenage protester mourned

Kyal Sin, known as Angel, was one of 38 people killed in anti-coup protests on Wednesday.

Parents of girls released by kidnappers had thrown stones at officials during the reunion ceremony.

An unknown number remain at large after escaping a breeding farm in Western Cape province.

The helmet and breastplate were discovered by an antiquities expert in Bordeaux.

A months-long investigation has recovered 150 children, some suspected victims of trafficking.

The suspect has been arrested for attempted murder, but police are not ruling out terrorism.

2020 Elections AdLib - March 2, 2021
0
The uniqueness of the GOP being the first American political party to transform into a cult may undercut acceptance but that hurdle needs to be jumped or the existential threat this nation faces from this cult may come to pass.

Featured Posts AdLib - February 27, 2021
11
Now that President Biden is in the White House and competence, expertise and humanity are back in power, time seems to be getting back to running as it used to. So this weekend, songs about time, hours, days, weeks, months and years are on the calendar so save the date!

Corruption AdLib - February 26, 2021
6
If you aren't busy trying to pass kidney stones or slamming a car door on your fingers, you may want to watch these panels and the speeches CPAC this weekend...even if they're more painful.

2020 Elections twilson117 - February 22, 2021
3
Some are saying a failed coup attempt without repercussions is a dress rehearsal. For the moment, it does feel like Trump** may skate on his botched coup. But some things are stirring, which could result in server repercussions for him.