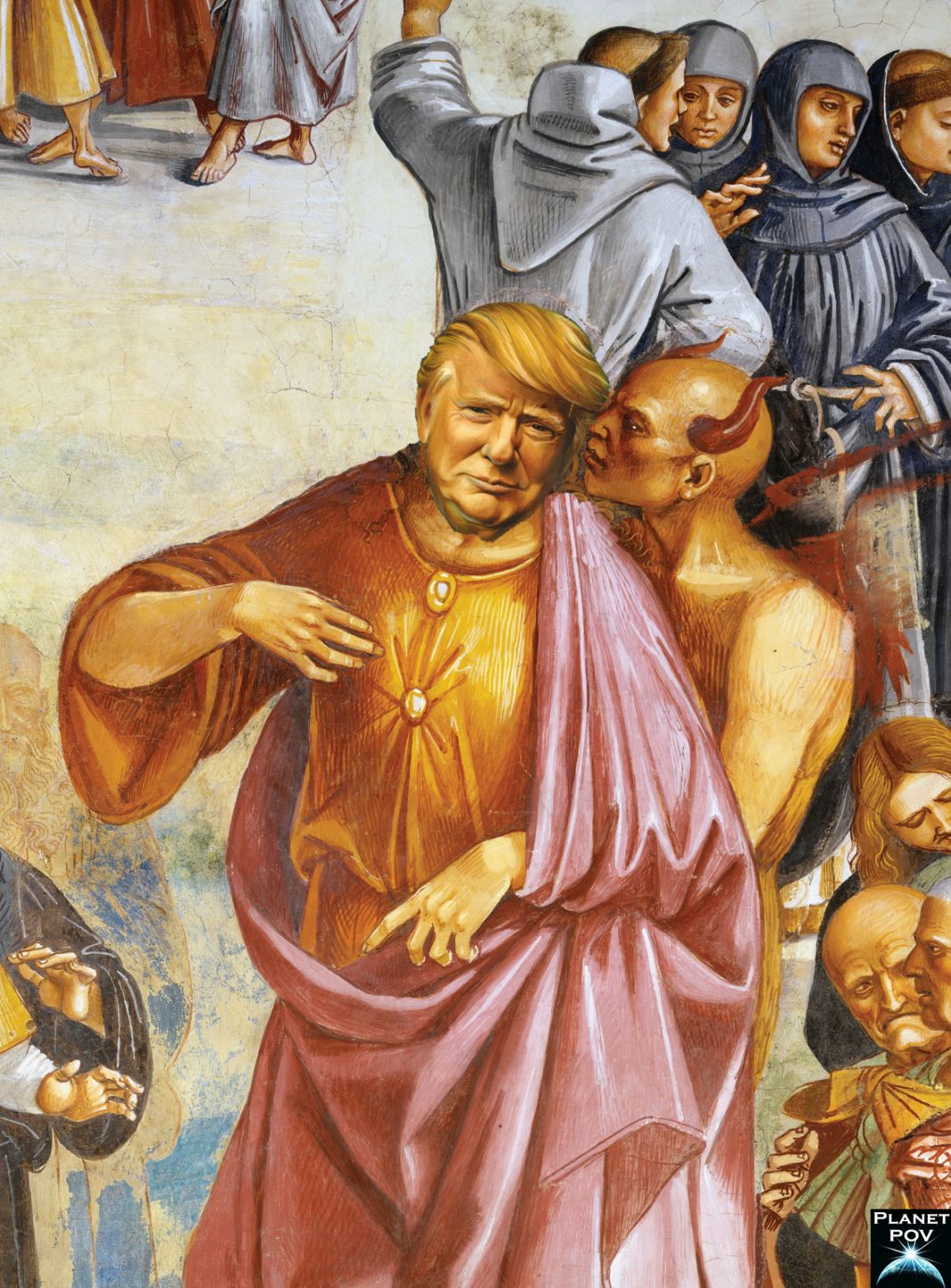 Standing on the White House lawn this morning, flanked by Satan and Charles Koch, Donald Trump brashly proclaimed that he is, in fact, the Antichrist as described in Bible.

“Okay, I’m the Beast From the Abyss, the man of sin, the son of perdition but I am not a witch and the Democrats’ impeachment is a witch hunt,” Trump declared as his hair from Satan’s fiery chuckles.

Trump went on to admit that he has been deceiving people with signs and wonders and affirmed his claim to be God himself. “Who else could have perfect conversations, I mean perfect, with the president of Ukraine? I only know of one guy who’s perfect, God, so if I have perfect conversations, that means I’ve got to be God. It’s not me saying it’s logic,” Trump insisted just before his Spanks loudly tore apart and his enormous belly burst out of his shirt.

Yelling over the noise of his roaring helicopter, despite the fact that he wasn’t flying anywhere, Trump pointed out that his rise to power should make Americans happy that The Last Judgement is coming.

“Whether you like Trump or you don’t like Trump, it’s thanks to me and only me that Jesus is coming back…which…since I’m God…means that Jesus is my son…hey, I can finally get rid of Eric!” Trump grinned, showing his gums.

Trump thanked all his “rock-solid” support from Evangelical Christians, “Through it all, the dozens of sexual assault allegations, thousands of lies, caging of babies and toddlers, complimenting Nazis, racist attacks on minorities, homophobic attacks on LGBTQ, religious bigotry against Muslims, robbing billions of dollars from to give to myself and the wealthy, attacking our country’s allies while “falling in love” with the worst and most murderous dictators in the world, breaking our laws and Constitution constantly and tearing apart all the institutions that hold our society together…I’m so happy that the Evangelical community has always stood strongly behind me, sharing my values like the real Christians they are. They’ll be first in line to be taken up in The Rapture,” Trump nodded before turning to Satan, both of them suddenly exploding into laughter before literally rolling on the ground and laughing uncontrollably.

After the announcement, Fox News echoed Trump’s words, Sean Hannity declaring that if Trump’s being the Antichrist was so bad, he wouldn’t have said it publicly.

“The Christian-hating, socialist Democrats will attack our Dark Lord Trump for revealing this just because they don’t want the second coming of Jesus and they sure as hell don’t want The Rapture to leave them behind,” Hannity insisted while desperately hanging more and more crosses around his neck.

“All Americans should be proud that it will be our Republican President, not one from a blank-hole country or…socialist Europe…that will finally bring about Armageddon. He was true to his word, ‘Only he could do it”…with a little help from his Fox and Friends,” Hannity smiled before the weight of the hundreds of cross necklaces yanked his head down to his desk with a loud slam.

Hannity closed his show with a special announcement that Fox News had scored a big win, signing Satan on as a new Fox News correspondent. “When the end of the world comes, Fox News will bring it to you!”

I was going to ask if this is satire, but decided against that.