Home News & Politics Elections Obama Ally Cameron’s Conservatives Win The Day In The UK: What It... 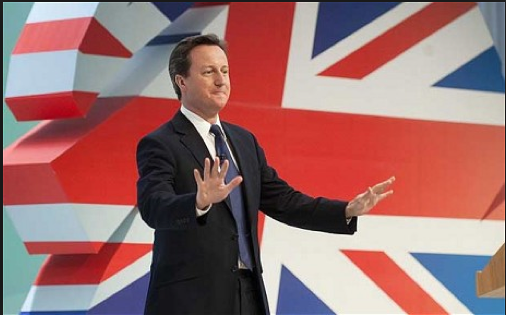 Prime Minister David Cameron has good reason to smile. His Conservative Party won in the British General Elections for Parliament that then create the executive that administers the government, and he won handily. The surprise success of the Conservative Party in the U.K. elections, and the near wipe-out of Labour in Scotland, could have ramifications for the country as a whole and its future in the European Union (EU).

But first let me point out that the Conservative Party in Britain does not promote the same agenda as the U.S. conservative party, the GOP. In the UK Conservatives ran on:

There were American Conservatives who would promote such an Agenda….they no longer reside in the GOP. Think Eisenhower. Think Buckley.

What did win out that sounds very much like GOP rhetoric here are:

The message that won out appears to be “It’s steady as she goes. We’re going to have a continuation of austerity, but in a fairly moderate way. Monetary policy in turn will tighten, but in a gradual manner,” Jacob Nell, chief UK economist at Morgan Stanley, told CNBC.

Where were the shifts in votes? Liberal Democrats lost seats as their supporters, angry with the alliance with the Conservatives, simply did not vote or moved to Labour, or decided to thrown in their lot with the Conservatives overtly to curry favor. Labor lost seats overall but most particularly in Scotland to the Scottish National Party, a distressing result for Cameron who campaigned on keeping the United Kingdom, united.

What are the big issues facing the Cameron Government?

All political parties in all nations shape themselves for victory….even if it means pretending that its core mission is no longer relevant. Labour without Labor.The GOP without an intellectual Northeast establishment. The Dems without progressivism.

He does not have a compelling public presence and as to the program submitted to the public for its consideration.

Another Labour peer, former First Minister Lord McConnell, said his party had experienced a “catastrophic night resulting from the Party having lost its way at the turn of the 20th century. Yes, I am referring to Mr. Blair’s “Labour Leaning Right” configuration.”.

I was in London the day that Blair, seeking his first shot at PM at the Blackpool Labour Party convening declared that Labour would no longer give its support to labour, the people who do the work. Upon that pronouncement, that excited very little notice in British papers, Labour, IMHO, became utterly irrelevant as an alternative to much of anything.

I have no idea what to make of it all. Cameron is not Maggie, but they’re not all that progressive as to take away the stench of Maggie, but Labour is almost worse if Tony’s legacy is to be reviewed.

I have a headache.

Somehow I misposted my reply to you. Here it is.

All political parties in all nations shape themselves for victory….even if it means pretending that its core mission is no longer relevant. Labour without Labor.The GOP without an intellectual Northeast establishment. The Dems without progressivism.

He does not have a compelling public presence and as to the program submitted to the public for its consideration.

Another Labour peer, former First Minister Lord McConnell, said his party had experienced a “catastrophic night resulting from the Party having lost its way at the turn of the 20th century. Yes, I am referring to Mr. Blair’s “Labour Leaning Right” configuration.”.