Home Previous Elections 2016 Elections If Chris Christie Became President, Who Would Be In His Cabinet? 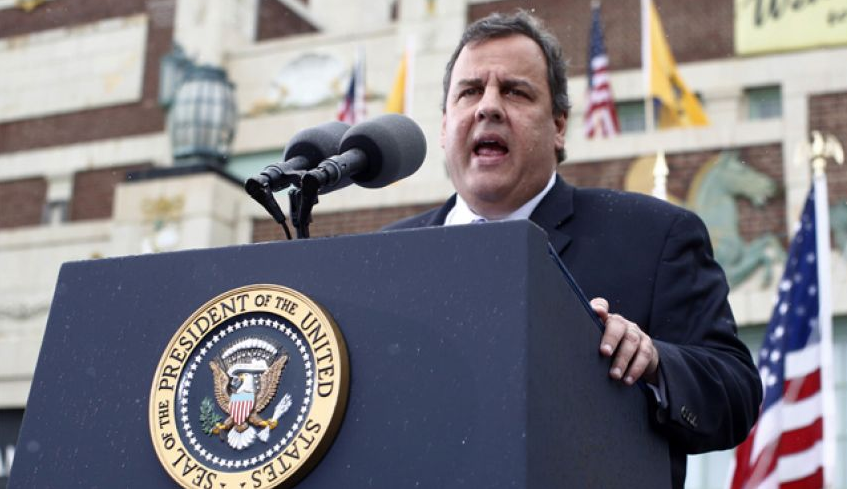 Right now there may be storms of allegations swirling around New Jersey governor and ex-Jabba The Hutt impersonator Chris Christie but the American public has proven again and again that it likes to give second chances to those who may have done the wrong thing…or at least prove that they have the long term memory of a hamster.

So, as much of a pounding that Christie is taking in the polls (and anyone who’s taken a pounding in their poll knows how painful that can be), it’s far too early to count him out as a contender for the Republican nomination for the Presidency in 2016…in fact, since it is the GOP nomination we’re talking about, it’s too early to count out any Bigfoot Truthers, circus sideshow performers, or Nazi reenactment enthusiasts.

If he did become President, after declaring that his first act in office would be ordering the National Guard to install defrosters in Hell (and insisting that Hell freezing over wasn’t caused by human activity), who would he nominate to be in his cabinet?

Thanks to PlanetPOV’s hard earned relationships with informers in organized crime, we have a direct pipeline into the Christie inner circle and have received a copy of his list of top picks for cabinet positions if he was to be elected or extorted into the White House.

We hope to get our hands on his top picks for the Supreme Court soon but we have heard that Miley Cyrus is at the top of his list.

Baa baa Gov. Christie, have you any bullion?
Yes sir, yes sir, three bags full!
One for the judge, one for the jury,
And one for the populace, all screaming in fury!

See, AdLib, what did I tell you!

Thanks heaps, PPO — keep it up and I’ll be grinning like a shot fox! 😉

NoMan, you have a talent for this! Use it wisely… 😉

Thank you very much, funksands. I try to. 🙂

Good morning, AdLib,
I’m sorry, but I don’t know if I can stop myself!

Hey diddle diddle, the cat and the fiddle,
Chris Christie jumped over the moon.
That’s all there is —
No one could believe he did it!

Here’s my one for the road:

Hickory Dickory Dock,
Christie has run out his clock
Like bullies galore
He’s no more than a whore
And he’s in for a terrible Shock!

One for the road.

Not so little Chris-Peep has lost much sleep,

And doesn’t know who to bribe to find it;

Now alone, he soon won’t have a home,

As he’ll be dragging his scandals behind him.

Good to hear from you!

Or Secretary for Job Creation:
“If we took away the minimum wage — if conceivably it was gone — we could potentially virtually wipe out unemployment completely because we would be able to offer jobs at whatever level.” -Michele Bachmann,

Great, Fergie1! How about:

Department for Praying the Gay Away: Marcus and Michelle Bachmann, Joint Secretaries.

Great pick, Fergie — and Michele Bachmann would be a perfect choice! 😉

A Tour de Force, AdLib! Nirek and KT – awesome! I’ll now have to dig deep to probably vainly match any of it.

Oh, what have you done, Dear Ol’ Chris,
You’ve given New Jersey the piss,
The Gopers can’t figure
Whose ego is bigger
And you say, ‘My Ass you can kiss”!

Hilarious ppo. Can you hum us a few bars? 🙂

Certainly Kalima, you sing it to the tune of Dick Chaney’s No. 1 Country hit –
“Honey, I keep missing you, but my aim is getting better!”

😆 Now I’ve got the giggles.

Great one, AdLib, and I’m afraid you’re leaving me
in your dust, but just at what we started!

Let’s make up new positions/posts, they make everything up anyway. How about Ted Cruz as “Secretary of Protocol, Government Shutdowns, and Gaudy Paisley Dressing Gowns”?

Mitch McConnell as Minister of NO!, Turtleneck Sweaters, Pink Cheeks and Hemorrhoids.

Well, seeing as they’ve already bought it, why don’t we announce joint Secretaries of the Treasury – The Koch Brothers!

There will be too many to apply for those posts, and the WH dining room holds only about 140 people. 😉

Boehner as Secretary of Hell No!!, Wine Slurping and Wet Tissues?

:LOL: ! Silly definitely works for me, love Boehner’s position! At least it’s not face down in a toilet as usual.

Oh I wouldn’t be so sure about that, he can do his job face down hanging over the toilet. All he needs is a bendy straw.

You’re welcome, AdLib, and thank you!

I like the idea of the whole new thread of Chris Christie’s Nursery Rhymes. You’ve certainly gotten it off to a good start, too. I don’t
know how many posters we can get to join us, but at the least it should be a boost to our still faltering economy as legions of entrants will empty bookstore shelves of nursery rhymes to alter and transmogrify their contents at Christie’s expense!

Don’t overanalyze this; but if you decide to start the new thread, I might be able to give the succeeding three verses more punch!:

Chris Spratt ate way too much fat,
His wife, too, abhorred the lean.
And so betwixt the ONE of them,
He vented too much spleen!

😆 Love the “vented too much spleen”! Okay, I’m sold, I’ll post a Christie Nursery Rhymes article next week and include all the ones here but invite everyone to join in with their own.

…Give you some more.
But while you decide,
Here’s an encore!

Really funny, NoMan! Okay, my last one because I won’t have any new ones to add to the post…

This is quite fun!

Thanks, AdLib! It is quite fun, and
you’re really putting me to the
test.

This may or may not be my last
one for the night; I may crank
more out later — you have my
leave not to post ALL of them
next week! 😉

Great idea for a satirical piece Ad. Oh the possiblities for a Christie cabinet. 😉

Cheers, KT! So many criminals, so little time to pick a Christie cabinet but someone’s got to lose out.

You should write for Stewart.

Thanks so much, pal!

There’s such a thing as “over the top” in the GOP?

Sure, but they keep lowering the bar, making it an easy leap.

Carmen, so shall we call this The Republican Limbo? Never ask how low they can go because you will always find you’ve underestimated.

Very astute analysis, as one would expect from you. And your list
of possible Christie Cabinet appointees comes close to rivaling the
low-lifes and convicted felons of the Nixon and Reagan Cabinets!

Far be it for me to cast a pall on your predictions, but — if I may
say it in verse — Christie may not even be able to extort his way
into the presidency:

Nice one and that would make a great idea for a whole new thread, Chris Christie’s Nursery Rhymes. How about…

Chris Christie went up the hill
To find a path to White House
Chris fell down and broke his crown
And Feds came tumbling after.