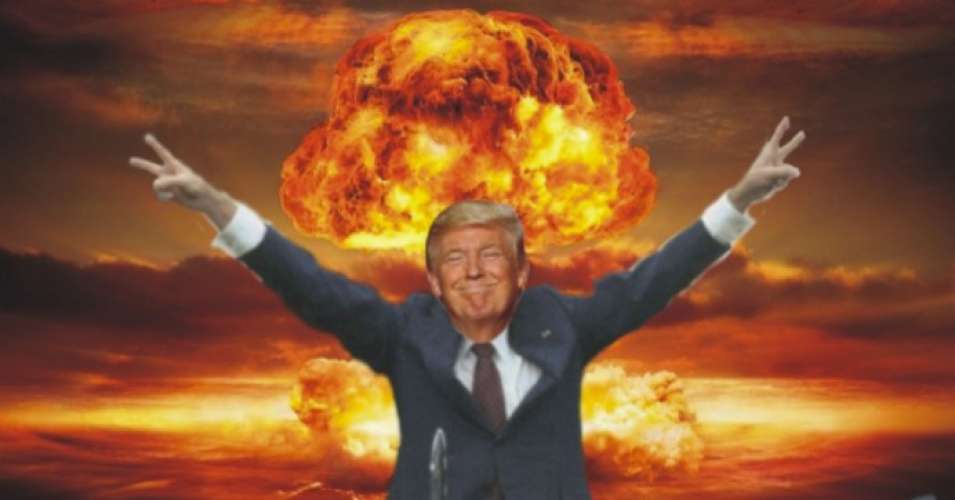 Doubling down on his dangerous speculations about cures and treatments to quickly stop the threat that COVID-19 represents to his re-election chances, Donald Trump presented a new and dangerous idea this afternoon.

Trump said that after consulting with a scientist at the CDC, whose tests so far indicate that irradiation kills the virus the quickest, that widespread irradiation of Americans could stop the virus in its tracks.

“I’m really excited about this, it would be so quick and easy to just wipe out this virus in one day, all across the country, like magic! Like you’ve never seen before,” Trump beamed after a quick sip of Lysol. “I was thinking about this yesterday while someone was trying to brief me on something “urgent”, I wasn’t paying attention to their boring screams because I was thinking about this…what if I dropped nukes all over the U.S., you know, in the air, so it didn’t harm any businesses. The radiation would come down so beautiful, like an invisible hero to kill the invisible enemy, Corona. My generals tell me that we’re spending a fortune on storing nukes anyway so it would also help with the deficit, killing two birds with one nuke,” Trump declared as he instructed a Secret Service agent to throw a rock at two birds to prove his point but he missed both and hit an elderly woman on a ricochet.

“I mentioned this to my top, top aide overseeing the CDC’s pandemic response, and this guy is just brilliant with breeding labradoodles so he knows a lot about living things and all, and he said he thinks it would be the best way to neuter Coronavirus, even better than this,” Trump stated as he swallowed a lit mini-flashlight.

“It would be so perfect, the radiation would just drop down all over everything and everyone and you wouldn’t even know it! I’m told it can even go through walls so it can clean every house and building of viruses. That’s the great thing about radiation, it doesn’t make a mess, you can’t even see it so there’s nothing to clean up! And it will act like a disinfectant on everyone, killing the virus inside and out,” Trump boasted while making Mike Pence pour Clorox over his head (and laughing at him).

“I don’t know but some people are saying we’d lose far less people from nuking the country than having everyone injected with disinfectant so since it’s a choice between those two, nukes sound much better! And if you’ve ever seen one go off, the beautiful mushroom cloud, it’s tremendous! It will be like the greatest 4th of July…which is when we should do this,” Trump exclaimed, literally patting himself on the back with his own hand before placing Dr. Birx’s obedient hand on his shoulder to continue patting it as he continued.

“The most important thing is, the next day, as Americans emerged from their homes…or rubble…we can open up America for business all across the country! Coronavirus would be totally gone! I saw that the stock market went up big time when a story came out this morning about my announcing my new nuking cure and I’ve gotten so many calls from all the top people on Wall Street that they’re 100% behind this if it means getting money coming in again. So it’s a win-win for everyone…who matters,” Trump stated while climbing into a radiation suit.

Trump explained that he would soon be sending a countdown flier to all American households titled, “90 Days to Stop the Spread…Forever!” to build enthusiasm about the July 4th nuking of America and providing recommendations for preparations including wearing sunglasses on that day if you’re outside, buying in advance as much toilet paper, chloroquine and Trump Water as possible and voting for Trump on absentee ballots “just to be safe”.

Well, who’s to say he hasn’t discussed it? After all didn’t he suggest shooting nukes into hurricanes?

As much as I don’t miss FB, goddamn some memes are good. Like, when you’re beyond words, just have Sarah Conner shank you with bleach. It’s tremendous, like you wouldn’t believe. A Miracle!

Don’t tempt him. Disinfectant and bleach injections with a UV light stuck up your arse wasn’t enough for him.

I’ve heard that throwing a plugged in toaster into your bath water while you’re in it, works well too.

THAT is our fearless leader!

Yep, too stupid to be afraid of injecting Lysol into himself.

I did read an article that it’s all just bravado from Trump in public, that behind the scenes, he’s terrified that he’s going to lose in November as his numbers keep going down to just his core base of cultists.

And we should see less of them anyway after the unprotected protests, Lysol injections and swallowing of lit flashlights take their toll.

Snicker. You got me! Mad King Donald is so crazy, I thought this might be true at first! (I haven’t been paying that much attention today—just sick of the whole thing, ya know?). Anyway, brilliant!

Since this isn’t THAT far away from him actually saying, I thought I’d tip it off more as it went on.

I’m also burnt out on his propaganda conferences, I haven’t watched them live for quite a while, just follow reports that make me glad I didn’t watch them.

But November is getting closer and closer, just over 6 months away. Just in time, before he really does blow up the entire country!

You made me laugh, and I havent laughed since they cancelled the Smothers Brothers.

Thanks Steppenwolf! Just trying to return the favor, I really enjoyed your “Special Moment With Donald” post too!

And very flattering to be in the same sentence with The Smother Brothers, they were great! Thanks so much!

“Trump beamed after a quick sip of Lysol.” The thing is that he is quite happy to order and serve his poison to others but will not drink of it himself. He would be deep in some golden bunker surrounded by sycophants, Big Macs and Diet Cola, and all of the great TV coverage he ever got on a video loop.

Still…you make a very important point: there is not a thing that he will not say, or do that is “too far” if it promotes himself and his so-called legacy…..Whether it is based on truth or note is of no importance because he can quickly convince himself of his righteousness.

P.S. I do wish you would post your brilliant satire at NewYabz. It is really sharp.

Actually, I’d bet that Trump has already taken chloroquine already and is secretly worried about what he’s done to himself.

And BTW, thanks for the kind words!