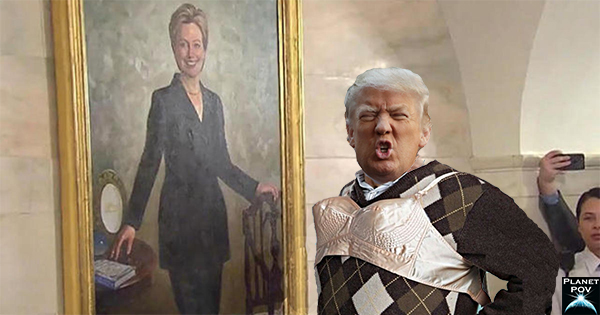 In a shocking display, Donald Trump surprised a group of people on a White House tour today, running frantically through the halls, wearing Ivanka Trump’s bra and Spanks leggings and shouting angrily at the paintings of former presidents that hang in the hallways. He screamed “Traitor!” at a painting of Abraham Lincoln, shouted, “Everyone knows you were a lizard!” at John F. Kennedy’s painting and yelled “You stole my fries!” at a painting of William Howard Taft.

According to the reports of some of the tourists who witnessed this, Trump was wide-eyed and seemed oblivious to the tour group, pushing through them at one point to pull down his Spanks and moon the painting of Barack Obama.

Trump then appeared to see imaginary figures coming for him and fearfully ran back upstairs, wailing, “No! Get away! No wilding in the White House!”

Republican leaders were asked for their reactions to this alarming incident and if this reflected instability in Trump’s mind.

“Oh no, not at all,” assured Senator Lindsay Graham. “I think it demonstrated his closeness with his family, his strength to challenge the policies of the past and the same ability to speak his mind that got him elected. Let those of us who aren’t being blackmailed over videos betraying their hidden sexual orientation, throw the first stone.”

Senate Majority Leader Mitch McConnell praised Trump for his behavior. “I think it’s a testament to how stable he is that he felt confident enough to do what he did. Do we really want a president who would be too afraid to be seen in his daughter’s underwear? I think not. I wish I had his stability! And his chin!”

House Speaker Paul Ryan explained, “This is the definition of stability in the Republican party. As for the phony outrage by Democrats over this, it’s really a nothing-burger wearing a nothing-bra that’s yelling at nothing-paintings. Other than that, I’ve got nothing.”

The RNC released a statement on Trump’s behavior. “We would hope by now that most Americans recognize that this is the most stable president this country has seen in many months. We believe in letting Trump be Trump no matter how it may make those so obsessed with sanity or considering launching nuclear attacks on America respond. What is ‘stability’ anyway? Isn’t it subjective? If you’re in a building that’s collapsing and you look out the window at someone else in a building that’s collapsing, you’ll both look completely stable to each other. That’s the GOP’s view and from where we stand, Donald Trump looks completely stable.”

Since The Trumpster described himself as a stable genius, I can only hope that — for an encore — you could do the same sort of parody on his intelligence.

Maybe it could start with an image of the Orange One completing (almost accurately) one of those colorful ring-stacking games that have been marketed for infants and toddlers for the last 100 years…? I know that Lindsey and Mitch would have equally effusive praise for that accomplishment.

Thanks so much Kes! Since you mentioned it…