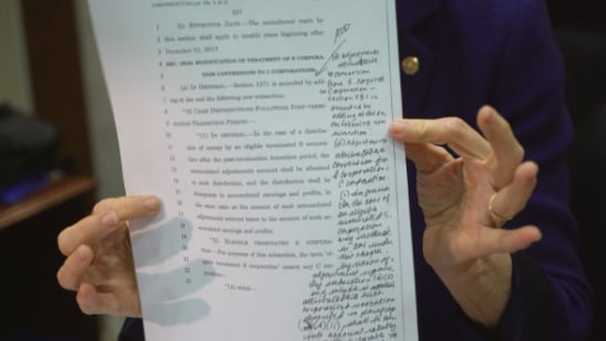 As the Republicans in The Senate scrambled last Friday night to add in all kinds of provisions into their Frankensteinian tax cut bill to secure the votes needed and conform to the rules of reconciliation (allowing for a simple majority vote and no filibuster), many changes were slipped into the bill that few Senators and few in the media are aware of yet.

One handwritten addition written into the tax bill that was passed, states:

“All expenses incurred by the owners of farm equipment, livestock or individuals providing uncompensated labor may be deducted from gross income generated through the exploitation of such.”

Though it is referring to providing tax deductions, it is affirming in federal law the practice of slavery as a legal business operation. Asked about this provision, Senator Lindsay Graham waved off concerns (with quite a flourish): “Of course this isn’t approving of slavery! It simply allows those who have to pay the expenses of slavery to deduct those costs, it doesn’t mean we’re giving them a gold star to encourage them to continue, we’re just giving them a great deal of money,” Graham explained as he looked at his shoes. “What tax payers choose to do in the privacy of their own plantations is their own business.”

Graham also noted that he thinks as this tax bill’s impact takes hold, many Americans will be looking at indentured servitude as a viable alternative to the lives they will be faced with. “Look, for some folks, having room and board and meals paid for will look a lot more attractive than regular life after our tax bill, working two or three jobs and still being drowned in debt, higher taxes and with no medical insurance. We all know slavery is bad and no one should be forced into slavery. But shouldn’t Americans of all races and religions, especially those less popular ones, have the freedom to not have freedom if they choose?”

Donald Trump tweeted his response to this element of the tax bill:

As critics of the tax bill learn about this section, they may overlook another hastily, handwritten section that redefines something else that many may also find quite objectionable:

“Legal fees paid by adults due to their engaging in historically and culturally understandable relationships with minors who were asking for it anyway and probably being bribed by liberals to lie about it happening when it didn’t and so what if it did, Ringo Starr had a song called “You’re Sixteen, You’re Beautiful and You’re Mine” and 14 is close to 16 which is close to 18 and if we’re going to protect unborn children, we can’t get caught up in protecting born children, hey, does anyone have an Altoid, my breath smells like a dead racoon…uh, where was I, oh yeah, such legal fees shall be tax deductible from the pedophile’s income be it as a Supreme Court Judge, Senator, President, or whatever, you getting all this down? We can edit it later in reconciliation unless The House just passes this then, what the hell, right? At least I won’t be primaried and I can get that sweet, sweet SuperPAC money from the Koch Brothers and the Mercers! That’s about all that really matters, young lady, but you know what else really matters to me? Exposing myself in front of really young women, you kind of look underage if I squint, you mind? I’m not really asking, just trying to be polite, I’m going to do it anyway and I’ll just call you a liar if you tell anyone and you know what they call that now, right? “Being Presidential”.

Republicans have expressed how comfortable they are with the wording in this bill and how anxious they are to cash in on it…that is, pass the reconciled version they’re drafting.

The country has long since legalized slavery already in the form of privatized prisons who offer inmate labor to the highest bidders. So there really shouldn’t be much alarm or indignation now. Fact is, stocks for these entities since dtrumps win have been nothing less than remarkable!

One of a great many articles on this subject and more regarding slaver….oops….I meant private prisons.

And part of the prison scheme is also using convictions to strip African Americans of voting rights.

It’s almost as if many are being treated like 3/5ths of a person, where would they get that idea?

You truly nailed it on this one, AdLib.

And if anyone survives slavery long enough to reach age 65, here’s what’s in store for them (brought to us by that flamingly liberal rag known as “Forbes Magazine”): “For most Americans, the numbers hidden in the GOP tax plan are onerous and cruel. The mass harm is looming large and doesn’t need to be transacted. It’s a coup de grace for the middle class and poor.” https://www.forbes.com/sites/johnwasik/2017/12/01/how-gop-tax-bill-will-blow-up-medicare/#262c57b54deb

Kes, one amazing phenomenon is how conservative publications and pundits have been swarming into the mainstream where Dems are, on how Trump and nearly every action, speech and tweet is destructive.

They better put their votes where their editorializing is in 2018 and 2020!

Yes, AdLib!! David Brooks just hung Trump out to dry on PBS! Said that failing to oppose him when he says or does something immoral is “the Republican Party selling its soul.” And that going along with his agenda is “shaking hands with the devil.” Make sure the voters get that message loud and clear, GOP pundits! (Or “pudnuts” as the Planet’s b’ito used to call them.)