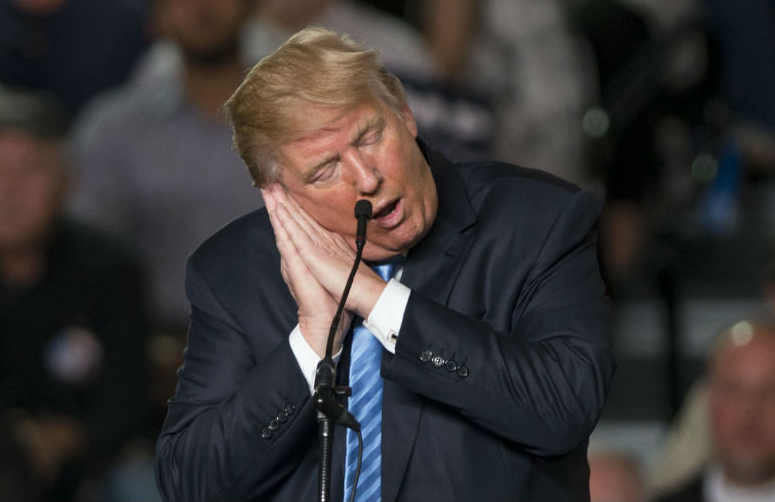 In response to Donald Trump’s poll numbers dropping day after day, Republican operatives staged an “intervention” with Trump to have him moderate his tone and statements in order to launch a “reboot” of his candidacy into one more palatable to voters.

Yesterday, Trump delivered an economic speech in a subdued tone, staying completely on script and not even reacting when his speech was interrupted repeatedly by protesters. Trump supporter Newt Gingrich lauded Trump on his performance.

“I think he’s really turning things around now. Today, America saw that Trump can read off of a teleprompter and not encourage violence towards protesters, what more does he need to do to show how Presidential he is?”

A chorus of media pundits and Republicans touted Trump’s low energy, scripted performance of economic statements that provided little in the way of practical details, as a great victory for him.

“We set that bar as low as we could and he squeaked right over it, now that’s what I call a win,” proclaimed Trump backer Scott Baio.

What many Trump supporters claim is that by submerging all evidence of who he really is and how he really thinks, Trump can “right the ship” and come out on top as the candidate the public likes best.

“The less that people see of Trump acting like Trump, the more they’ll want him in the White House…not as Trump but as the person who isn’t acting like Trump,” stated Fox News host, Sean Hannity. “In fact, I’ve advised him that he could really hit a home run by coming out and declaring that he would not vote for Donald Trump out of principle…which could connect with many of the independent voters out there that have been turned off by his campaign.”

“I think he did himself a lot of good last night when he was sleeping, no gaffes, projecting an image of being relaxed and peaceful, I think we’ll see a turn around in the polls this week if he keeps sleeping like this,” boasted New Jersey Governor, Chris Christie, before excusing himself to take an after-buffet nap.

Trump’s sleeping is being viewed by Republican party members as a new secret weapon in the presidential race, many are suggesting that if Trump sleeps through more of his campaign, his popularity could skyrocket.

“He only helps himself when he’s asleep,” RNC Chairman Reince Priebus explained. “That’s when he’s at his best as a campaigner.” Priebus is also exploring placing teleprompters around Trump’s bed so that if he wakes up in the middle of the night and wants to tweet or call into a news show, he’ll know what he should say.

Priebus has also employed a team of hypnotists to accompany Trump at his stump speeches and act as surrogates on news shows, using their skills to hypnotize voters so that they forget all that Trump has said over the last year.

“Don’t get me wrong, we are proud of having Donald Trump as the leader and nominee of our party,” Priebus insisted a bit too strenuously. “We just want voters to give him a fair chance as a candidate and getting them to forget everything he’s done over the campaign is what I’d call ending prejudice,” Priebus proclaimed before screaming and racing away as two black teens eating Skittles strolled down the sidewalk in his direction.

Things seemed to be going well — until… Well, as Manafort/Wilder said: “Please! I beg of you. Don’t humiliate him!”

(As if he doesn’t do a brilliant job of that himself.)

And of course there’s this footage of how Trump’s brain was chosen:

LOL! The whole “Not So Young Frankenstein” theme just works way too well for the GOP and Trump this year.

Just like Trump, what he’s trying to say is always misunderstood.

Ha, and today, Trump claimed that Hillary is determined to get rid of the 2nd Amendment. He warned of Hillary appointing SC judges that would abolish the 2nd amendment. He said there would be nothing gun owners could do about it, but the second amendment people might do something.(paraphrased)

He basically suggested the assassination of his political rival. Just like he suggests every foul thing he’s suggested in the past. Like the mob guy that says to the store owner, “That’s a nice plate glass window you got there, be a shame if somthin were to happen to it.”

That’s what Trump does. He’s smart enough to know he can’t outright suggestthese things, so he “jokes,” about them. Joke=Suggestion

I have known too many really sleazy people who do that. Trump is no different.
If he’s awake, he’s going to screw up.

KT, yes, he seems so amused with himself when he vaguely suggests some horrible criminal attack. In this case, suggesting that gun owners should rise up if Hillary is elected and either kill her or SCOTUS judges…then just walking away from it saying he meant something else completely innocent.

Here is exactly what he said:

You do have to give Trump credit for something, no matter how horrible the last thing is that he’s said, he always finds a way to make the next thing he says even more horrible. That is a real talent…one that goes hand in hand with being crushed in a Presidential election.