Stunning all of humanity, Jesus Christ returned to Earth today and after assessing the state of conflict and suffering around the world, He spoke out about the many evils he saw. Among them, he made a brief comment condemning the prejudice promoted by Donald Trump.

“And what’s with this Trump guy?” Jesus mused. “He calls himself a Christian yet I’m quoted exactly in The Bible saying that next to loving my Father, the second greatest commandment is loving thy neighbor as thyself. And he wants to build walls and hatred against his neighbors around the world? Hey, I’ve known Roman prefects who acted more Christian.”

Trump was quick to respond in an angry tirade, “Look, who is this guy to be quoting The Bible to me?! For every Corinthian he names, I can name two! You wanna know the truth? To attack my religious beliefs, this guy shows his true colors, he’s anti-Christian and we’ve been putting up with enough of this attack on religion in this country under Obama! Not only that, and I kid you not, I’ve heard that this guy is a friggin’ zombie! He died thousands of years ago then he just pops up alive like this? We shouldn’t be sitting around listening to a bleeding heart zombie, we should be nailing him to a cross before he tries to eat our brains and replace us with Syrian refugees!”

As the froth around Trump’s mouth foamed into a Santa-like beard, he continued, “And believe me, no one is more Christian than me! No one! Don’t believe this zombie! There must’ve been a good reason they got rid of him in the first place! Right? And he comes back to life? That sure sounds evil to me! There’s no place in America for anti-Christian radicals like this! The only way to preserve our Conservative values is to build a big beautiful wall that keeps people like him and his family completely out of our country and our lives!”

Trump concluded by claiming that in his first hundred days as President, he would bring back stoning in public squares. “The Bible is very smart, very smart. It tells us that the guy who doesn’t have any sins should throw the first stone, which I would consider an honor, like throwing out the first pitch for the World’s Series. We’re gonna bring back stoning, crucifying, waterboarding and much, much worse and make America great again!”

Ad, when the Pope, who I believe is the best Pope in my memory, said tha trump was not a Christian I had to say, amen!

Actually other than the Jew running for President I don’t believe that any of the candidates are acting very Christian. Kinda funny that Bernie acts more like Pope Francis and Christ than all the “Christians” running.

Jesus: “Thou shalt not covet thy neighbor’s goods”
Trump: “That’s bullshit, Man! Ever heard of Eminent Domain? And you talk funny. Not only that, you’re from Palestine, right? Where’s your visa?”

Just for the record, is there anyone left who hasn’t been insulted by Dump?

So he’s a Christian, eh?

There is a pattern in the behaviour pointed out in these articles, and it’s all about the green stuff. He’s just another greedy, fat slob.

Great article, AdLib!! Careful, Dump might sue you too. Ha!

I couldn’t resist the temptation! 😉

“Are there any women here today?” 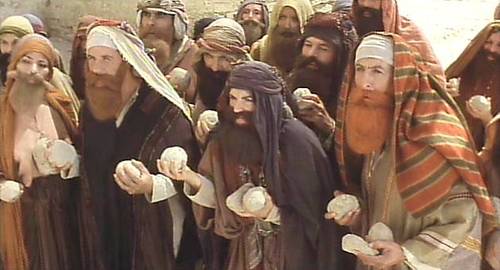 Men playing women, who are playing men! The genius of Python. 😉