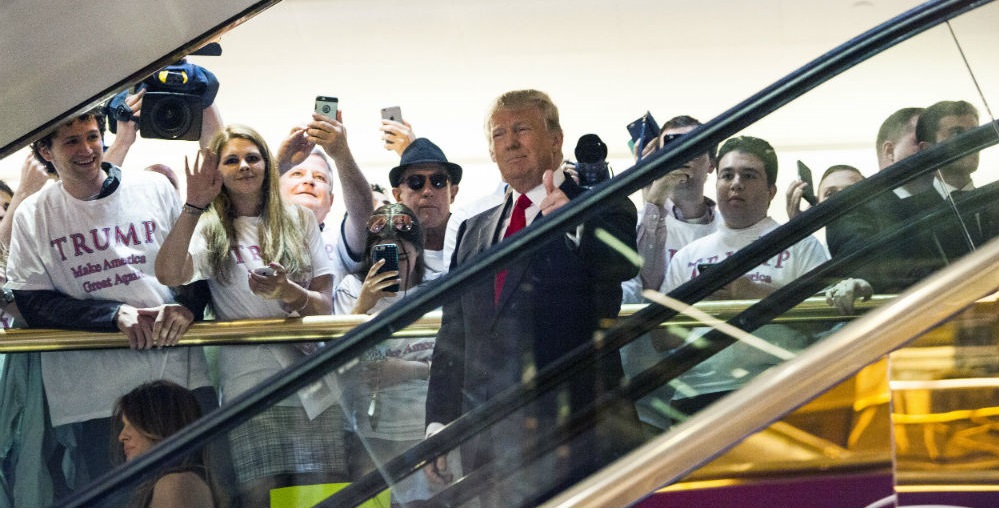 It is an open secret that many of candidates in the Republican Primaries are simply greedy, egotistical cynics who don’t have any real aspiration to be President. They are the products of a morally bankrupt party, dishonestly feigning that they want to represent their party in the 2016 Presidential election but transparently using one of the most hallowed democratic processes as a self-promotional marketing campaign to solely benefit themselves. It disgraces their party but also denigrates the American political process.

There really is no better symbol of the greedy and ignorant core of Republican politicians than Donald Trump. No doubt Huckabee the Huckster has to be a bit jealous, having held that crown up until now. And the runners’ up in this Mr./Ms. USA (Unbelievably Selfish Assholes) pageant, including Ted Cruz, Lindsay Graham, Carly Fiorina, etc. have got to feel that Trump is horning in on their scheme.

It shouldn’t come off as surprising that those who belong to the party of exploitation would exploit and demean their own party just to increase their celebrity and asking prices in the media. What is a bit surprising is how accepting the GOP seems to be of their Presidential Primary being turned into a serial infomercial for a collection of media whores.

There are legitimate candidates in the GOP field who are serious about winning the nomination but they will likely have to stand on the same stage and debate with Donald Trump as their peer in a debate. If it wasn’t so hilarious, it would be amusing.

The late night comedian lobby really won big on this one, they’re offering sacrifices to the Comedy Gods every day to thank them for this glorious bounty. Poor Jon Stewart, he’s leaving The Daily Show in six weeks, so little time and so much buffoonery in store for the next year and a half.

In the end, will this have a meaningful effect on the 2016 elections? I would argue that it would. Not an enormous effect but by the GOP being portrayed as a joke for the next year…through its own candidates and debates and in contrast, the sight of the Dems having sane and substantive debates and campaigns, the undecided voters will have two very different images to compare.

Yes, eventually the sleazy snake oil merchants will be eliminated and the GOP will have a legitimate candidate…but he will be stained by all the snake oil that is spilled over the primary season. That can de-energize some Republican and Independent voters from supporting the Republican candidate and highlight the more mature, responsible and sensible nature of the Democratic candidate.

As for the GOP’s reputation after the lunacy of this primary season, I’m reminded of an exchange from an old W.C. Fields movie, “It’s a Gift”.

W.C. FIELDS:  “Yeah, and you’re crazy; and I’ll be sober tomorrow and … you’ll be crazy for the rest of your life!”

Great article, Adlib – By lowering the bar on qualifications for the GOP candidates there is definitely much more to compare and contrast. And more to expose of the hypocrisy and deception. – It will be interesting to observe all of the little GOP/Koch brother puppets trying to outdo each other to get campaign financing such as:

I hope that the Democratic candidates do expose these corrupt GOP candidates. – As for Trump, his arrogance is only matched by his ignorance. He didn’t just lower that bar, he broke it into pieces lying flat on the ground. – Good to see you. 🙂

Trump embodies all of the worst traits of Republicans. He is rude, clueless and he thinks the world revolves around him. He’ll never get the nomination but I hope he is around for the debates. Sometimes I think he is a stealth candidate sent in by the DNC to drag the Repubs down.

It is inconceivable to me that someone who doesn’t possess a single healthy brain cell under that monstrosity of a bad toupee, would insult the presidency of a world power country by running for the highest position in the land.

I don’t have this reaction often, but the sight of this man, even before he opens his dumb mouth, makes me want to vomit.

The other candidates are quite honestly from the bottom of the barrel, but what Trump is doing is grotesque and extremely disrespectful.

Come on America, you can do better than this. Clowns belong in the circus.

I posted this in my updates yesterday and thought it summed him up perfectly.

AdLib, I read the transcript of Trump’s whole speech yesterday and there are no words — it was completely random, stream-of-consciousness babble. I’ve heard drunks and addicts who were completely wasted who made more sense. Even Republicans can’t seem to find any way to justify what he’s doing. The latest I’ve heard is that the cheering “crowd” at his announcement consisted of paid performers. What comedy writer could have come up with anything crazier than that?

His hair says it all. Here is a man who has no clue about how he really looks to the world.

I so rarely disagree with you, but there’s just one sentence that I have to question: “Yes, eventually the sleazy snake oil merchants will be eliminated and the GOP will have a legitimate candidate…”

Can we really be sure of that? 😆 I’m having a tough time trying to determine which one of the remaining eleven (and counting) dwarfs that might be!

Thanks again for a terrific analysis of this unique campaign. And just think — we’re still at the beginning! There’s more than a year to go!

Kesmarn, You are so right. He has no clarity on any topic…other than to mock or denigrate. He is so much like Sarah Palin in that respect.

There’s talk that Palin might be his running mate, goleafsgo! What a match up.

Too funny, Kesmarn! What a ticket.

Hi, Kesmarn – I was wondering the same thing about having a legitimate GOP candidate. They all have excessive baggage to carry around on the campaign trail. And so far, none have offered any legitimate explanations for inaccurate and insensitive speeches.

There will probably be a lot more of those “I’m sorry if anyone was offended” and “I misspoke” and “That was not what I meant to say” in the coming months. – Good to see you. 🙂

So good to see you again, Aquarius! I know what you mean about this GOP clown car. Every now and then I think: “God forbid the worst case scenario should happen, which one of these bozos would be the least obnoxious to live with for four years?”

So far I have no answer to that one.

Kes, T Rump is the clown prince of the GOP!
Or maybe the clown jewel ?

Escalating the level of Idiocy permeating the GOP! ( Couldn’t help myself!)

Ad, the GOP has sunk to a new low. Trump is the clown prince of the GOP. Integrity is totally missing from the GOP.
Did you know that Bernie Sanders has a higher percentage than all of the GOP put together?