Home Previous Elections 2016 Elections Bizarro Romney Announces, “Me Want to Be President So Me Not Run!” 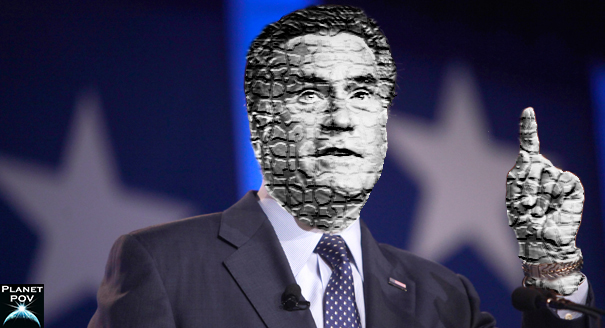 Bizarro Romney, the imperfect replica of Mitt Romney who had surfaced recently and encouraged predictions that he would run for President, made a statement to his supporters today about his potential run for the the Presidency in 2016. The text of his statement is below:

BIZARRO ROMNEY: “Goodbye! Me am Bizarro Romney and me very disappointed at support you have shown me. Me have been in the media a lot lately for one reason, me have nothing to say that matters. For bad example, me talk about how me now care so much about poor people. It am true, me believe best way to help poor people am to tell them me want to help them. That am all me need to do and me also help them by cutting taxes for people who am rich.

Me believe that Obama am too weak and too strong. Obama am bad for country and him prove it by making economy and employment better. He hurt Americans by getting 10 million on health insurance that help them and save them’s lives. Obama hurt poor by wanting to raise minimum wage and hurt middle class by wanting to make them pay less taxes.

It am so obvious. Who care more for poor people, man whose family was once poor or son of millionaire governor who buy elevator for car? Me even care about things not alive, that am how compassionate me am (car have too much trouble going up escalator).

Hillary am bad candidate for President. She not man, she not cause Benghazi and she not Bizarro Romney. She not know world things like me. Me predict that London Olympics be disaster, me promise US economy be destroyed after Obama re-election and me know only way to make peace with Iran am to bomb them.

It am clear that me am best man to become President. Many in Republican Party prove that by saying, ‘Romney stinks!’ and ‘Me not give money to Romney for campaign’. Me want to thank all them who say such nice things to encourage me.

Because of that and because me want to be President more than anything in world, me now announce that me not run for President! Me hope that me now go up in the polls and me am on way to becoming President of 53%!

Me again want to say one more time how much it depress me that you be so supportive of me running for President. Me wish you bad luck and Satan curse this nation.

Did not find the errs amused But I am bitter today….. because while these MOFOS play with the life of millions, my employee has died at 24 died to an aneurysm…

And all of the residents of MA say “Coulda told ya so”. We bit the bullet so the rest of the nation didn’t have to suffer this fool gladly…

Good one AdLib,he is bizarre,He’s out now anyway,we can put him back in the rear view mirror where he belongs

All that meaningless build up of sheer nothingness leading to massive ego deflation on finding out that nobody cares. Can’t stop my tears and no, I’m not crying, I’m 😆

Such a waste of print and air space. Bye Mitty, and please accept this kick in the pants from the 47%.

Mitt Romney is not running for president, and some people are just coming to grips with that.

I for one am glad that he is not running. I hope we never hear any more from Mitt.

I wouldn’t write Mittens off yet, Ad. Either he will rise up in the polls and change his mind or he has made a deal with Jeb to be his VP. If he were to become VP, my wife predicts the potus would die in office of an unknown cause and Mitt will get his wish. Remember that he really really wants to be president.
Just food for thought.

Nirek, no question that Romney badly wants to be President but I think Rupert Murdoch and The Kochs slammed that door shut on him and he’s out for good. Poor entitled Mitt, the spoiled rich kid who’s always been able to use his money to get what he wanted, it’s over Mitty!

And he won’t make a deal with Jeb, he despises Jeb because Jeb has been a thorn in his side for years (Jeb wouldn’t lift a finger to help Romney in the FL primary). There’s bad blood there and from everything I’ve seen, Romney is actively working against Bush to get someone else winning the GOP nom.

Things just got very interesting! And Bush should be scared Mittless!

Ad, interesting theory. And here I thought he was warned by the Bush crime family to back the fuck off if he wanted his family to live…

To paraphrase another republican, “We won’t have mittromney to kick around any more.” As the kids used to say, “Too bad, so sad.” (Of course, I write these words with a smile on my face.)

glenn, it does make ya think!