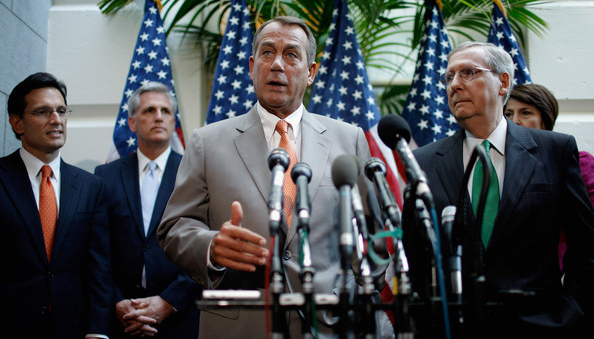 A majority of Republican Congressmen have banded together to file a joint lawsuit against their own wives for taking out the trash at their homes.

“This is an overreach of domestic power,” Texas Senator Ted Cruz stated. “It was done without the proper authority and is destructive to the institution of marriage.”

Cruz and the majority of Republican men in Congress explained that it was their sole responsibility to take the trash out in their house and that their wives’ unilateral action in taking it out makes it impossible for the trash to be taken out in the future.

“Our wives have undermined our ability to trust them and without trust, they’ve taken away the basis for us to work together and get anything done,” expressed House Speaker, John Boehner. “Just to be clear, as has been the case for our party for many years, we’re talking trash.”

These Republicans stated that even though they hadn’t taken out the trash for over a year, despite the fact that their wives had given their approval way back then, they were going to eventually solve the trash accumulation issue. “We wanted to address the trash issue in a piecemeal fashion, first we want to fully secure our trash can lids. Once they’re fully secure, then we can address taking the trash out,” detailed incoming Majority Leader, Senator Mitch McConnell. “Our wives do not have the right to just take the trash out on their own just because we haven’t addressed it yet.”

Many of the wives of Republicans are stunned by this surprise lawsuit, claiming that the trash that had been piling up at their homes for years had gotten out of control and was causing safety and security emergencies. They claim that something had to be done soon before it became a disaster. Their Republican husbands replied only by decrying what they claim is the usurping of their power.

Boehner made it clear, “We completely oppose our wives acting like emperors and making a decision that was ours to make. We would rather live with mountains of garbage than give up our power to not take it out!”

Oops!! I think that those wives threw out the wrong trash.

trash (trsh)
n.
1.
a. Worthless or discarded material or objects; refuse or rubbish.
b. Something broken off or removed to be discarded, especially plant trimmings.
c. The refuse of sugar cane after extraction of the juice.

2. A place or receptacle where rubbish is discarded: threw the wrapper in the trash.

3.
a. Empty words or ideas.
b. Worthless or offensive literary or artistic material.
c. Disparaging, often abusive speech about a person or group.

4. A person or group of people regarded as worthless or contemptible.
tr.v. trashed, trash·ing, trash·es
1. Slang
a. To throw away; discard: trashed the broken toaster.
b. To wreck or destroy by or as if by vandalism; reduce to trash or ruins.
c. To beat up; assault.
d. To subject to scathing criticism or abuse; attack verbally: “The … professor trashes conservative … proposals as well as liberal nostrums” (Michael Marien).

Kalima, they fit all definitions but, a. Worthless or discarded material or objects; refuse or rubbish. describes them best.

I agree, Nirek but am rather partial to “Empty words and ideas” and “trash – nonsensical talk or writing – codswallop, folderol, trumpery, wish-wash, applesauce, rubbish, tripe, drivel, garbage – a worthless message -” too. 🙂

Excellent piece, Ad.
I saw Lindsey Grahm complaining about missing a chance to blame Obama for Benghazi when it came out that there was no blame for that tragidy.
Sure wish we could put trash like him out.

Nirek, wow, Graham has really become so openly dishonest and mercenary. So the U.S. deaths in Benghazi only mattered when they could be used to attack Obama and the only real tragedy about Benghazi is that it couldn’t be used to hurt Obama.

What a piece of human garbage indeed.

Hello Nirek. A lot of indignant foot stomping from Ms Lindsey. Could it be menopausal? Without Benghazi, what will become of him? 😉

Nirek..Ot/To could only respond here. To complete my biography, I was married – EXTRAORDINARILY – happy for 18 years to my late husband.We were factually a two of a kind.My first one was a terrific environment freak as well. An utter humanist with an amazing love for animals and the planet..And one of the first guys to build a recycle plant in Italy.xx

Hysterical, AdLib…..LOLOLOLOL!!!!!!! Yet…their (spouses) haven’t taken all the trash out, right? I mean, they are still living in their houses….

Hey ExFan, exactly! It’s like a twist on the old Yakov Smirnoff routine:

“In Republican Congressmen’s homes, trash takes you out!”

that was absolutely hilariously spot on great!

Thanks so much, traceymarie! Nice to see you at The Planet!

Too bad the (non) voters didn’t take the trash out when they had the chance!

I can not get over the lazy, passé voters. Colorado has elected two terrible Republicans…Cory Gardner and Mike Coffman.

GirlOutWest – Nice to see you!

Yes, it really exposes the degree of voter apathy when Republicans can get such extremists elected.

I was actually floored by the results. I had no idea people would be that apathetic since we have suffered through years of obstructive behavior and gridlock in Congress. There are rumors that the gop will eat their own so maybe that’s a good thing?! I’m afraid gridlock is going to reign no matter what.

PS: I read your articles often but I don’t always respond, my bad :-)I agree with you all more than I agree with most people I know…again, my bad :-)!

Republicans don’t dispose of trash, they re-elect it.

So true, so true.

And, of course, these men will have to go to the store to get something to drink as their wives have poisoned the tap water…

Indeed, they’ll have to make sure not to light their cigars near a running faucet!

Very funny stuff Ad! I have to say, your satirical style is delightful! A very good satirical analogy to the current insanity exhibited by Boehner and his band of malcontents.

Not that I would want to help them out, KillgoreTrout, but it sure seems to me that a better strategy would have been to stay silent until they took office. At this point, they have have sort of… well… they … um… finished before they… um, you know…

Hey J! The GOPers just can’t help themselves. They’re so starving for a piece of Obama that it’s made them absolutely crazy. It’s a sure case of Obama Derangement Syndrome! 😎

Hey KT, thank you so much! Very appreciated!