People often mention how Mitt Romney seems to have great difficulty relating to most Americans but from the Romney campaign’s perspective, it is Americans who are to blame for not relating to Mitt Romney. Some people might say that the Romney upside-down and backwards mindset on this and virtually everything else is through-the-looking-glass thinking…and they’d be right!

PlanetPOV has uncovered that instead of relying on books like Ted White’s “The Making of the President” or even Sun Tzu’s, “The Art of War”, the Romney campaign is basing its campaign strategy on the book, “Alice’s Adventures in Wonderland” by Lewis Carroll and other books in the series.

Though they will deny it publicly, all one needs to do is review a number of quotes from these books and the influence of these familiar children’s tales on Mitt Romney’s thinking and decision making becomes quite clear.

As to today’s rumor on The Drudge Report that Romney will be selecting The Mad Hatter as his VP choice to appeal to the Tea Party, that remains unconfirmed.

A Farewell to Trump: Oh the Bad Places You’ll Go

Twas the Nuts Before Christmas

Romney could easily have been a character in a Lewis Carroll book. You’re so right, AdLib.

It’s ironic. The Kochs and Rove wanted a puppet candidate. One they could easily control and who would mouth the scripts he was handed. And wooden is what they got.

I think that this is what happens when you’re dealing with a person who has been told literally from birth how he feels about things and what he thinks about things. (The only way to raise a religious ideologue.) Eventually he has no idea what the real “he” feels or thinks, because his real self has been successfully extinguished.

I have a sense that what is left behind is a big roiling kettle of anger. And I have a feeling that’s what is at the base of the hollow man that is Mitt. That flat affect and mechanical laugh conceal a lot of rage, if I’m not mistaken.

Not the best personality for holding the office of POTUS.

b’ito, he really ripped into Mitt in that interview! I might almost be inclined to feel sorry for Mittens. Almost.

Kes, that was a brilliant deconstruction of who Mitt Romney is, well done!

Made me think of other fictional and literary characters Mitt Romney could be:

*no modification of character name required

😆 Oh, AdLib! Those are just brilliant! I love every one of them.

How clever, AdLib! Romney sure is..um…strange in so many ways – the way he structures his sentences, the words he uses, even the way he walks…very stiffly and with short little steps. Almost robot-like.
It seems like he has memorized his words and is afraid to speak other than what he was told to say.

I wonder if Romney ever read Lewis’ “Alice in Wonderland.” or any of the other classics like Gulliver’s Travels. He certainly could never have been influenced by Charles Dickens.

Thanks for this,AdLib. It certainly is a pleasure reading all of the postings written by such intelligent and articulate people who are concerned about the future of America…indeed the entire global community. I have learned so much and look forward to being enlightened every time I visit.

goleafsgo, thanks so much for the very kind words!

I think back to Cheney when he was VP declaring:

“We’re an empire now, and when we act, we create our own reality.”

The hubris that comes with acquiring a great deal of money and power is astounding. These people live in a bubble of like-minded egoists and believe that the masses are morons who can be made to eat dirt if The Elite demand it.

They truly think they can create reality to be what they want it to be, with enough money and reputation. They certainly have their successes, as with demonizing the ACA, but they fail to recognize their limitations.

So, the Romney camp firmly believes that as long as they dispute reality and insist it isn’t valid, they can impress their own convoluted and illogical reality on the nation.

What’s affirming is that the majority of Americans don’t seem to be following Mitt through the looking glass so there he is, all distorted by himself.

BTW, very pleased to have you as part of The Planet’s community!

Wonderful analogy Adlib! I feel like Im in a scary and unrealistic wonderland every time i turn the TV on and i have to listen to a so called conservative. Romeny is a tool and im worried that too many sheep just dont get it. I wish their was some way i could get through to more of them.

Conservative now means they are conservative with their money, while they seek to steal ours.

Welcome to the Planet kalie and your right, turning on the tele and listening to Mitt and the GOP is almost like entering an alternative universe.

Hope you enjoy the site and make full use of our hospitality.

Hey Kalie, thanks so much!

I’m also concerned about how many people just swallow whatever the GOP or the MSM throw at them.

Recently, a TX Repub argued against schools teaching critical thinking to avoid the danger of kids not believing everything they’re told.

At the same time, Romney’s losing in most polls against Obama so that would seem to confirm that most people just aren’t buying Romney’s BS.

I don’t think the GOP has any principles anymore, let alone conservative principles, just a single-mindedness to grab power and wealth. They’ve opposed even their own proposals in their quest to block progress, damage the nation and Obama’s re-election chances.

The polls i have seen lately on the mostly conservative (until late afternoon) MSNBC show that they are neck and neck. What polls are you seeing?

MSNBC and much of the MSM just focus on national polls and only those that show a tie or close race.

Just because a lot more Texans vote for Romney, it doesn’t mean he gets any more electoral votes from the state.

Here are the polls that count, those in the swing states that will decide the election: 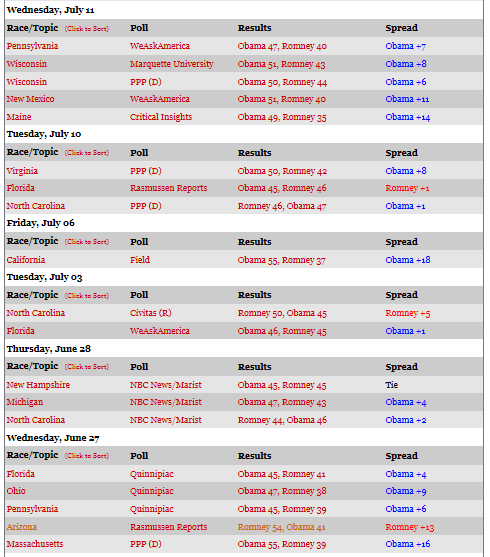 Hi Kalie, When I need cheering up on Potus’ reelction I go to Nate Sliver at fivethirtyeight. He’s a pretty good statistician, and Obama is predicted to win.

AdLib you are spot on. We simply have not seen a candidate this queer (using the 19th century use of the word) in modern history. Mittens does come from a fantasy world and is running a campaign as surreal as Lewis’ most quirky works.

I remember before the campaign started that one of the strategies the Obama campaign considered using against Romney was to point out his ‘strangeness’. Of course the right wing cried foul and said this was some kind of dog whistle argument against Romney’s Mormon religion. But Romney has shown with his own statements that he is indeed a very very queer fellow. Nothing more exemplified that than his obsession with proper tree heights before the MI primary. Then again in Romney’s fantasy world the trees are probably talking back to him.

He is an odd duck indeed (Romnald Duck?). I do think it is setting up the victimized BS of the Repubs by directly saying Romney’s strange and their responding, “Bigots against religion!” (even though these same hypocritical people have demonized Keith Ellison for being a Muslim Congressman and all Muslims as likely terrorists).

The good thing is that people get it anyway. That’s why the more people see of him, the less they like him. And as his elitism and dishonesty is exposed, the subtext is, “This guy is not normal.”

The White House has teamed up with TikTok stars, while some states are paying “local micro influence

The administration made a last-ditch, failed appeal to extend the moratorium to buy more time for st

In the Republicans’ disinformation campaign, the arrested Capitol rioters are political prisoners an

Trump Has Built War Chest of More Than $100 Million

In the first half of 2021, the former president raised far more money online than any other Republic

Short of the Mandate They Crave, Military Leaders Race to Vaccinate Troops

The Government Accountability Office said a $2.9 billion award to SpaceX to build the next lunar lan

With votes in the Senate to advance his bipartisan compromise last week, President Joe Biden took a

The rent is now due, America

It's like Democrats in the White House and Congress forgot the date.

Democratic Rep. Jim Himes of Connecticut did not want to lose his cool, but he said this week he cou

The data shows the unvaccinated don't fear the virus, even as they are most at risk

Coronavirus cases and hospitalizations are again rising in the US. All the evidence we have suggests

Israel's PM warns he could send "a message" in retaliation, as Iran rejects "bas

Raven Saunders: What the Olympian's X protest means to her

The US shot-putter defies a ban on podium gestures after taking silver at the Tokyo Games.

'You can be African and black and play polo'

Myanmar: State of emergency extended with coup leader as PM

The Chicago festival is the latest to cut ties, after the rapper's derogatory comments about pe

The deputy commissioner is indicted in the US for allegedly taking a bribe from an influencer.

Coastguard vessels and private boats have brought holidaymakers to safety, as the death toll rises.

Featured Posts AdLib - July 31, 2021
4
Nothing goes better with another hot Summer weekend than barbecue and cold drinks so this weekend's music thread is for songs with titles or lyrics including food, drink, and of course desserts. Now let's dig in to some delicious tunes!

Mental Health twilson117 - July 30, 2021
1
Everyone wanted to see Biles compete in this Olympics. Wanting to be in that moment of awe, watching her flip through the air as if gravity had no hold on her.