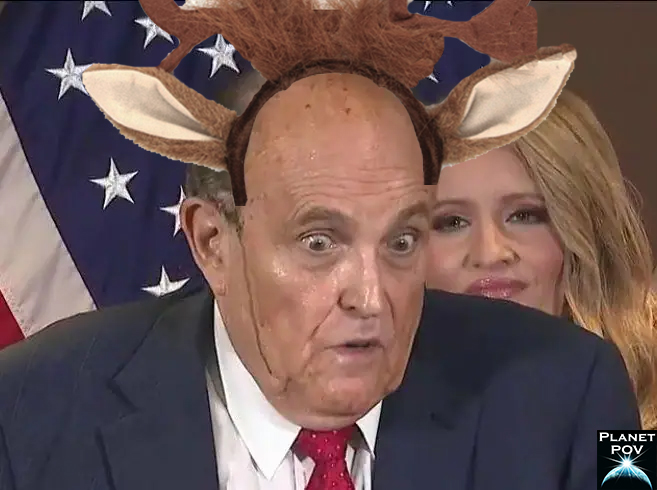 Christmas is a time for family, love, generosity, and holding your breath and tongue at Christmas dinner as your Trumper cousin close-talks to you without a mask about how Covid vaccines will turn everyone into cannibal, pedophilic communists who chant Critical Race Theory.

There have been a lot of nice “presents” for Americans from President Biden and Democrats this year along with a lot of “coal” in our stockings from the Republicans and their nuttiest Nut & Cracker. However, as the concept of no one being above the law seemed a distant memory, the January 6th Select Committee in The House appears to be reviving that core concept of our democracy. Also, in civil court, lawsuits are multiplying against a number of those who tried to help Dumpster Fire steal the 2020 election.

Among the most prominent of those schemers was Rudolph Giuliani who is already being sued for more than a billion dollars by Dominion Voting Systems and this week was just sued by election workers he also defamed and harmed.

So as a stand-in for TrueLump, the seditionists around him and in Congress, this Christmas’ song parody is about the man who will soon be in a Nightmare After Christmas along with many of his fellow criminals, Rugy DroolyOnMe…or something like that.

Said Rachel to America, “What have you been longin’ to spy?”
“All I want for Christmas is a locked-up Don and watchin’ him cry!”
And then away ran Rudolph drippin’ from another hair dye.

Said Congress to a jury, “What would please you most to get?”
“A little Rudy plea to make Trump cry, snort, drink and wet”
And then away goes Rudolph, locked up as a convict’s pet.

So you can have the tune in mind, here’s the original by the legend, Chuck Berry (feel free to sing along with the new lyrics!):

From all of us at PlanetPOV, we wish you Happy Holidays, Merry Christmas, Happy New Year and if things work out, a very indicted Trumpness!

I don’t know how you do it, AdLib! You never fail to brighten the holidays for us. Thanks so much and hoping your holidays are brilliant. The writer of “Don’t Look Up” said that it was getting harder to do satire because reality was catching up way too fast. I think you’ve noticed the same thing. But you’re doing a fabulous job of staying ahead of the madness in the most creative possible way. Kudos!

Very happy to hear that, Kes, thanks!

Yes, “Don’t Look Up” is right up my alley as social and political satire and even though they substituted a world-ending comet for Covid, it still has to work hard to cross the line from reality into satire…because I think we could all agree that Trumpers would in fact aggressively deny that reality too because it came from science and facts.

I’ve said this as well, satire is very difficult nowadays. It used to work because you could start off with a far-fetched but believable exaggeration then escalate it so much, people would recognize it was satire. But now, it’s very hard to blow out reality that much, even the most far-fetched satire could become reality tomorrow.

And the other obstacle to satire today is the proliferation of propaganda and extremist lies. Readers can actually become annoyed and upset when they read satire and (as happened to me here at The Planet), have their satire attacked as just promoting “fake news”, deception, and propaganda.

It is a strange time, while the Trumpist Cult engages in pushing lies and propagating insane conspiracy theories as absolute fact, it’s become much more difficult to present a humorous exaggeration to ridicule elements of society when reality is in the midst of an assault on what is true.

It has been a bit disappointing, I can’t wait for this era of Know-Nothings and Fascists to wane so we can get back to more important things…like exposing and holding up to ridicule, dangerous and destructive politicians and groups of extremists.

Hope your Christmas was lovely and you have a Happy New Year’s Eve and Day!

I love the fact that you said you couldn’t wait for this “era of Know-Nothings and Fascists to wane,” AdLib, because clearly that statement contains within it the assumption that it indeed will end. You know how it is — sometimes in the middle of a cold dark winter’s night, you get that unpleasantly spine-tingling notion that… “maybe…it…won’t…end?” [Insert wryly laughing emoji here.]
That’s the creepiness that we really, really don’t want to succumb to.

I’m hoping that 2022 brings with it a renewed commitment to truth. Including a commitment to the notion that truth itself actually does exist. I hope we see a resurgence of an acknowledgment of the power of love — minus the false sentimentality that tries to pass itself off as love (because fake love is such a “winner” when it comes to selling things and pushing propaganda).

Bannonite cynicism/nihilism doesn’t have to win. Bannonism (and Trumpism and Steve Millerism) isn’t an ultra-hip post-modern version of How The Future Looks. In fact — I believe that ultimately it can’t win. Because it contains the seeds of its own destruction within it. It’s just a matter of refusing to be sucked into that slimy bog. Of choosing instead to laugh at their fear-mongering.

Let’s all do a happy Archbishop Tutu dance of hope into the year 2022. If nothing else, it will annoy the hell out of them.

That is just too perfect. Thanks for the laugh. Great graphics!!

Hope your holidays have been everything you hoped they would be.

It’s Boxing Day here and I can’t get out. 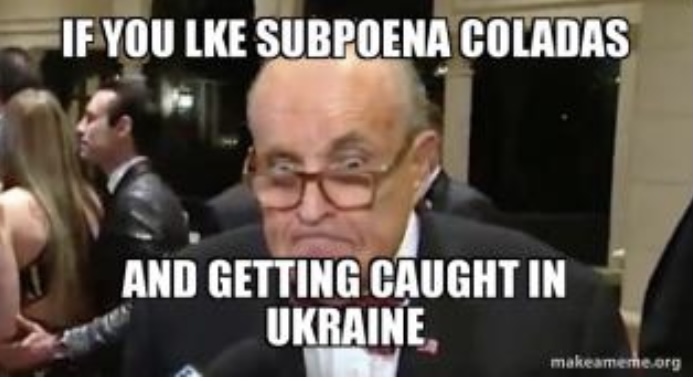 Thanks so much, Kalima! We had a wonderful Christmas and meal! Hope you did too. You couldn’t get out? For Boxing Day there, do they box you into your home?

Have a very Happy New Year…it’s about time we had a very happy one!