This was the week when the Trump Train not only went speeding off the tracks but it burst into flames and plowed into an explosives factory before blowing up into bits. Trump betrayed America’s allies against Syria and ISIS and implodes U.S. policy in the Middle East. Then Trump’s Chief of Staff confesses in a public press conference that Trump broke the law and is guilty of quid pro quo impeachable offenses…and America should just get over it.

The Trump train went off a cliff for good this week, Republicans are finally jumping off it and impeachment is steaming ahead. So this weekend’s music thread is about going off the rails, getting flagged for it and arriving at just desserts.

Share your musical train of thought about Trump’s train wreck of a week…and term!

Past time for you to fold them Don the Con. 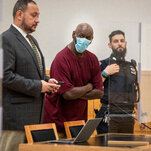