Home Justice Civil Rights America Is Under Attack By Terrorists 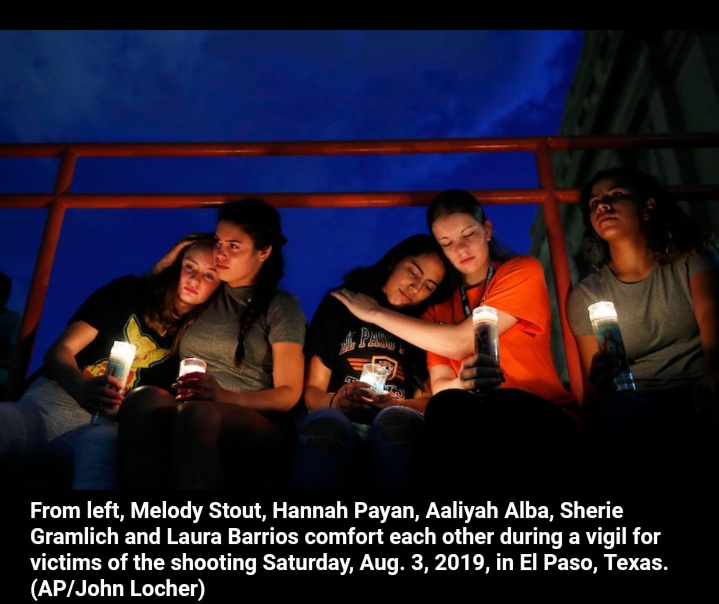 America Is Under Attack By Terrorists !

America is under attack. A war is being waged against us; a real war effectuated by the slaughtering of unarmed civilians by heavily armed ultra-extremist sociopaths supported by the Republican Party and the lobbyists bought and owned by the gun industry.

There is no safe place, no sanctuary. They attack children and women first, the unarmed and defenseless. There is no respite; they attack almost every day. They use the most sophisticated military weapons available for close quarters.

In a single year, our simple-minded, goose-stepping leaders will spend more than seven hundred billion on the military, ostensibly to make us safe (but, actually to protect their investments in oil, and in oil technology; and to support criminal kleptocracies and dictatorships abroad). But, we are not safe. How safe do you feel today?

Will you feel any safer after Texas police “investigate?” Which they won’t. Does Donald Trump’s: “full support of the federal government,” make anything any better (or even have any meaning?) Or, Trump’s invoking God’s name (May God forgive us for worshiping false gods).

We are at grave risk economically, because troglodytes at the top of the food chain can’t imagine change, and are ready and willing to throw away real change, change that actually benefits everyone by making the energy that we use our own property; because they are too limited intellectually to lead us into an awesome technological future, or just too damn lazy. Forget about the tech billionaires, they think that they own the world because they made a chat program. Or because they made an electric car, more than a century after electric cars were invented (before internal combustion engines).

We are at risk militarily, because our most important theatres of operation are understaffed of highly skilled technicians (read the real story of Benghazi in Gen. Carter Ham’s testimonies before Congress). Often, our most valuable assets are under-protected, and insanely limited in resources – the Republican caucus made that. But, inadequate staffing is a smaller problem than morale.

Is there any way to express the morale problem in the U.S. military that can convey the gravity of the situation? Perhaps not other than by saying that we are not capable of fighting a war at present (Yeah: “For all that money!”) Things have happened in the military. Forces, and ideas, that have no place in our military have become so powerful that they are tearing the military apart; as Congress tears the country apart because they are incompetent, or simply for the love of division.

Twenty-four years ago, extremist terrorists in the Republican Party decided that: “liberty and justice for all” had no place in the future that they imagined. The have slowly, meticulously destroyed liberty and justice in a thousand myriad ways. We can all name them. They threw one election, and forever stained the reputation of the Supreme Court of the United States in the process. And they used influence, and outright criminal tactics, to throw lesser elections by the thousands; from school boards to U.S. Senate seats. But, all that was rehearsal and expert training.

The war has begun. A war on our way of life. A war by terroristic cowards, who’s only way of expressing themselves is by pulling a trigger, by murdering human beings.

We’re not doing so hot in this war (we have a way of starting out slow); at least not by the usual standards. But then, the usual standards were written by them! Let’s check out some reality-based reality: It appears that Democrats talk about issues and programs, while Republicans talk about who we should hate; and they talk about HIM. Trump is truly their god. Also, a whole legion of Republican congressmen are leaving the sinking ship. They have been, for no discernible reason, for five years. I guess they want to spend more time with their investment counselors. They may as well.

There’s a saying about the Mafia: “They don’t care how big the pie is, they just want all of it.” The Republican party learned from the mafia, but those ways just won’t work now. Now, they are trying to stop the oncoming freight train that is the expansion of the world economy. In a word, they are a bunch of silly bastards who were fool enough to fall for a slick con game. They are going to get run over, and busted to pieces. We don’t have unlimited resources anymore: we can’t afford organized crime, it’s unnecessary overhead. We trail in so many areas of world leadership; from metals production to technical services, that it’s unreal to assume that we, one country, can dominate, often with questionable legality, world trade as we have in the past. But meanwhile, the “truth” is that the United States could lead the new world economy – the opportunities are endless.

But that’s circular thinking, isn’t it. Trump, and Organized Crime, don’t want endless opportunities; or new technologies, or locally owned/grid connected solar farming, or 3-D printed localized manufacturing; or cooperation, or inclusion, or progress. They don’t believe in those things. They want us to believe that all these things are enemies, real anthropomorphic enemies. They are insane, and they think we are children.

I’m not going to start talking about her yet. Just, “Be afraid, Donald; be very afraid!”