Home Justice Civil Rights Their Only Crime Was Wanting To Live 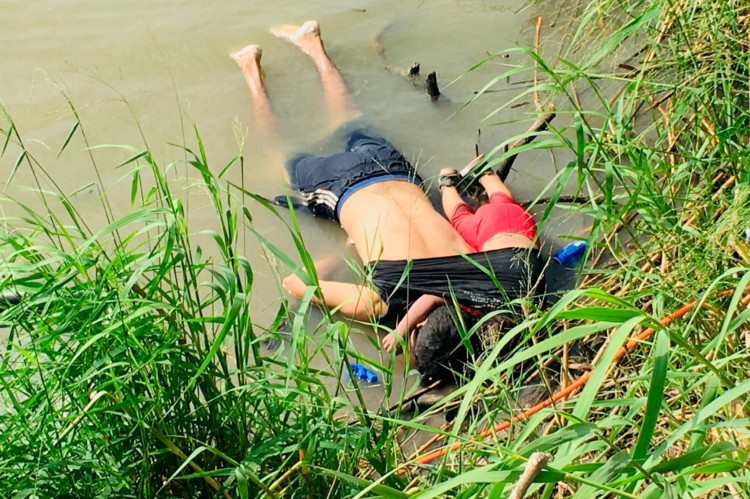 This is the only image anyone should look at today. A painfully familiar crime scene. Victims of a crime better known as hatred. It isn’t the first time we have seen the tragedy of dead children whose elders found reason to flee their homes for a plethora of reasons all in the name of survival.

Yet here we are again looking at an image that is definitive of the human race we’ve become. The world spins so damn fast that all too often we’re too busy hanging on that we fail to see what some have become. Some have become so numbed to the carnage that they comfort themselves with other distractions. It seems a lifetime ago that the world witnessed something similar, something just as tragic and just as gut wrenching and the circumstances of survival and hope end in an all too familiar of deadly conclusion.

The horrors of a dead child on a beach was seared into the minds of anyone with a heartbeat and a hint of human decency. The world sat up and took notice. Alyan Kurdi’s lifeless body was a jolt to all who only heard ‘a number of refugees’ drowned, up until the point that a dead boy on a beach suddenly gave leaders of the world a reason to step away from political side step statements and do something, anything.

I have been criticised in the past for using such a visceral image with some claiming that it is distasteful or sensationalist.

It’s reality. It is the cold hard truth that too many climb the moral mountain and claim it as their own but often fail to recognise that their ascent to the mountain top was built upon a humanity that is brain dead and hardhearted. The constant lies and contradictions of those who on one hand use their faith to judge others but traverse the contradictory nature of their stances on refugees.

Those who whore their faith would have us all believe that a heavily pregnant mother and her husband had to escape a brutal regime in order to survive by fleeing their home to save the yet to be born child. They call that Christmas.

Yet when people flee similar circumstances it is an invasion. There is no shining star leading the way nor are there wise men and shepherds but traffickers and coyotes who send the desperate weary huddled masses on a journey through hell where the destination is more a purgatory than the paradise promised and paid for.

The price is paid in lives.

The dehumanisation of humans is always a step too far and it allows those who defend policies that lead to the images posted above with weak excuses of blaming parents for trying to save themselves and their families from brutality, starvation and fear. They say a parent would never take on such a journey with a child but wilfully ignore the fact that they’d more than likely do the exact same in the same circumstances.

But the US and other western powers have for too long frittered away any semblance of credibility given the lack of self reflection and how they themselves were implicit in the creation of these environments of degradation and corrupted powers. Central America has the same American fingerprints as other areas of the world were intervention covert and overt has long lasting effects and rarely in the form of the freedoms promised.

For those ‘lucky’ enough to make it to the border the travelling may stop, the journey may end but the nightmare seemingly only beginning with refugee camps that aren’t fit for purpose nor able to cope with the policies that have been deliberately put in place by the darkest of forces within the darkest White House. It is astounding that a first lady can run a campaign named ‘Be Best’ when all we see is the absolute worst.

The worst of the US on full display and its worst self running the camps. Some US politicians have referred to these camps as concentration camps and whilst parallels are apparent so far the deaths of multiple children we hope have been down to negligence and not a deliberate negligence. Although when some former Taliban and Iranian prisoners are claiming their treatment under their captors was better than the treatment of children in US custody.

FORMER PRISONERS OF IRAN, TALIBAN AND PIRATES SAY THEY WERE TREATED BETTER THAN MIGRANT CHILDREN IN U.S. CUSTODY

According to a report in Newsweek former detainees of the aforementioned were given access to basic sanitary and hygiene products.

The lesser president didn’t use the death of a child to find his long dormant or possibly extinct human decency but opted to go on about his wall that Mexico isn’t paying for.

Trump represents today’s GOP. Today, the GOP is Trump. The GOP policy related to immigrants south of the border is one of cruelty. What is being done to immigrants at the concentration camps is a crime against humanity, and Trump, the GOP and Trump’s supporters must be held accountable for the atrocities. They say it is Obama’s fault or the fault of congressional Democrats. They accuse AOC of hypocrisy for voting against the funding bill that was recently passed, when the bill does little to nothing to address the problem in the northern of Central America or the concentration camps in the USA. Trump represents today’s GOP. Today, as the USA celebrates America’s independence, the GOP celebrates Trump, with a military parade in Washington D.C., and asylum seekers in concentration camps.

The problem at the border is the fault of Trump. He did not create the conditions – but his obsession with a “big beautiful wall” and with all his melodrama … he has caused it to explode into a crisis – with human beings being neglected in horrifying detention centers. Although there’s still a lot of work to be done – a bipartisan 4B emergency border aid bill recently passed, and hope it’s a step towards ending inhumane conditions and hopefully no one will have to take drastic measures (like swimming across the Rio Grande) in hopes for a better life. Very tragic what happened to a father and daughter. That’s done out of desperation and has to end.

Donald J. Trump’s idea of a better America only includes hand selected immigrants, like his current wife and in-laws. All other would be entrants, especially those from Mexico, Central and South America, and those stink hole island nations, and Africa, and all Muslims, aren’t welcome. If he could he would ban former President Obama to the lands of his father in Kenya, be gone!

Except for Trump and his RW enablers, the whole country weeps. Not long ago, I would not have believed that our government could be so cruel, so heartless, so lacking in common human decency.