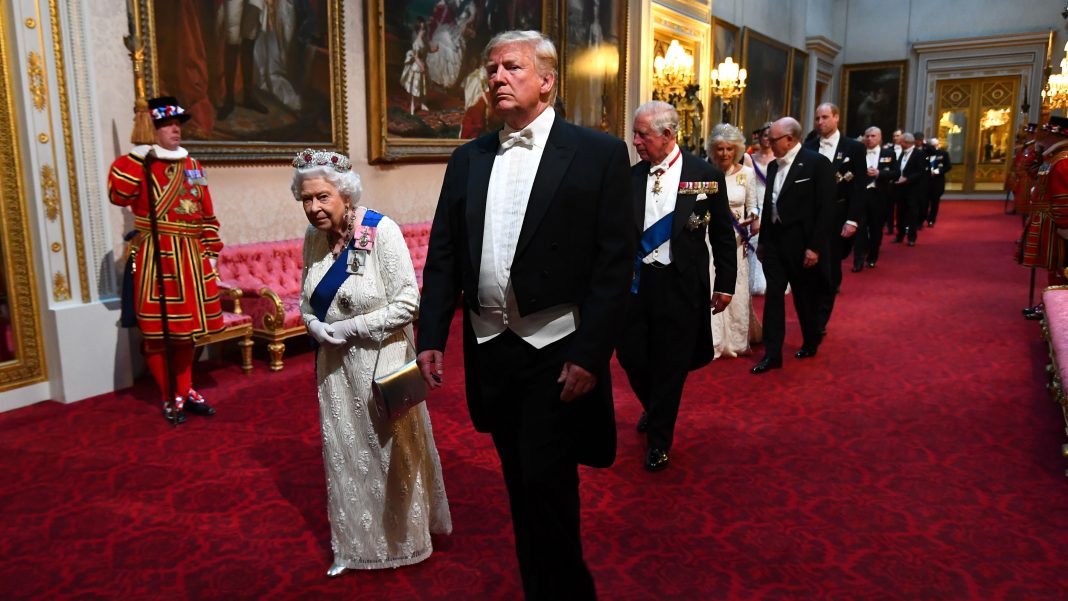 As part of the ongoing reception the British government arranged for Donald Trump’s visit, Queen Elizabeth hosted a luncheon today in Trump’s honor that became quite embarrassing when the main course could not be served.

Reports say that the traditional British meal that was prepared for the luncheon, an over-sized Beef Wellington, somehow went missing before being served and could not be found. The Royal Chef who personally made the entree expressed complete bewilderment and regret about the incident.

“I was simply mystified. One moment it was there, the next moment it was just gone,” said Mark Flanagan, Queen Elizabeth’s Royal Chef. “It wasn’t even cooked yet. I’ve replayed it all in my mind many times now and I still can’t account for it,” Flanagan expressed regretfully.

“I remember completing wrapping it in puff pastry, setting it on the baking sheet then being alerted that Mr. Trump was being escorted on a tour of the kitchen. I greeted him then took Mrs. Trump over to an array of pans we have hanging near the oven so she could stare at her reflection in them for several minutes. Then Mr. Trump announced, following a quite remarkable burp, that he was ready to go. Mrs. Trump and I returned to him, they left and when I turned to the baking sheet, the Beef Wellington was no longer there,” Flanagan recounted.

Flanagan went on to describe the intense search that he and the kitchen staff engaged in to find the missing main course but it was to no avail.

“I felt horrible, nothing like this has ever happened before and there is no one to blame but me. I finally had to put aside the disappearance of the Wellington and prepare a substitute as swiftly as possible,” Flanagan noted. “I prepared a sautéd turbot in its place but unfortunately, I don’t know that Mr. Trump enjoys fish, he didn’t eat it or really, any of the rest of the meal that we served.”

What was more upsetting to Flanagan than the disappearance of the Beef Wellington was feeling he had let The Queen down.

“Her Majesty trusted in me to serve a thick, over-sized side of beef in a flaky fragile shell and in the end, I wasn’t able to serve Mr. Trump,” Flanagan said.

AdLib, rumor has it that when Trump went to Ireland the next day to inspect his golf course on the American taxpayer’s dime, there was a prediction of rain. So his staff supplied him with Wellington boots (“Wellies” in the UK) lest his very tiny feet get damp.

Seems he ate those as well. Never knew the difference. Boots Wellington. Beef Wellington. Big Mac Wellington. When you never take time to chew, it makes very little difference. With enough ketchup, they’ll all go down faster than Lindsey Graham on the slippery slope to purgatory.

What a waste anyway. The Royal Chef should have just served fast food. Have the waiter come out with a dome of McDonald’s food like Valentine did in Kingsmen Secret Service.

Luckily, there were no small children or pets in the area–although they WOULD move far quicker than Spankie.

I hear that Websters has just included this photo of Trump alongside the definition of “gluttony”.

Yeesh. I hit the 4th star instead of the 5th star.

I guess they couldn’t find anyone to check his pockets, eh?

That bulge in his shirt ain’t a six pack!

I think it was staff. Mr. T. wouldn’t be caught dead eating something other than fast food. He’s terrified of being poisoned. He’s probably got a point there, though with many guests coming, he was pretty safe. What I’m burning to know is what the Palace chef served instead? Mr. T. is not a nice guest. I imagine he demanded his Big Mac no matter what. He’s the only head of state who could throw a conniption fit over not getting his fast food fave. And upon that the security of the free world is teetering.

There’s a story going around that with all the changes in common law that have occurred since the Glorious Revolution of 1688, nobody has actually ascertained whether the Queen’s right to behead a recalcitrant and duplicitous enemy has been revoked. I suspect the Queen took great solace in the possibility it has not been.

I’m with her on that.

Maybe he thought it was a giant burrito and swallowed it like a boa constrictor? Check out his belly in the photo above, I’d enter that in court as Exhibit One and Done.

I bow to your powers of observation!