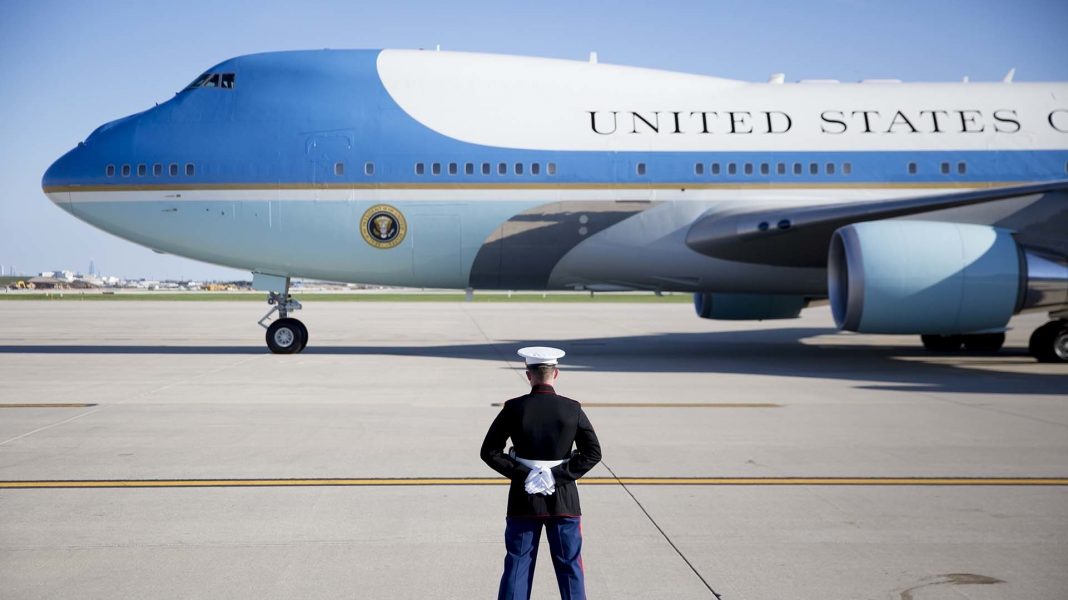 In an unexpected twist, the extreme vetting program that Donald Trump ordered as a backdoor Muslim ban, has prevented him from re-entering the United States.

Homeland Security reports that in following the criteria, Trump’s association with hate groups in social media and threats and hostility expressed towards American democracy and government officials, required that he not be permitted into the country.

While pacing angrily aboard Air Force One, press pool reporters overheard Trump’s reaction, “This is a load of crap! That Executive Order is only supposed to keep hateful extremists out of America! Okay, but I’m white so why is it being used against me?!”

Mike Pence was reached for comment as he was leaving the Oval Office with a tape mesaure and wall paper samples in hand. “This is a total travesty,” Pence said with a straight face that kept breaking into a grin. “Something should be done about this by somebody sometime soon if possible!”

Asked if he would just reverse the Executive Order as acting president, Pence chuckled, “I really wish I could but all those terrorists would swarm in if we put down the drawbridge. I just can’t see how we can let Mr. Trump back into the country without putting it at great risk.”

Mr. Pence was also evasive about why he had just ordered the beginning of the border wall to be built starting at Andrews Air Force Base where Air Force One is parked.

Well, he’s back or is he? Did you see the weird way he guzzled his water just like a clumsy robot would? That wasn’t Fiji water he was drinking. That was battery fluid.

I tried my best to keep him out! I thought Fake News came true!

Actually, clumsy robot is right on, he looked like he’s never opened and drunk from his own water bottle. Russian prostitutes usually are in charge of watering him.

Yes, about that “watering”. Allegedly it was on the bed once ised by President and Micjelle Obama. The fake president trump must have still been in Highschool during that trip in 2013, right?

I’m glad the media is showing trump’s mocking of Rubio last year. Touché with bells on!

Very funny, AdLib.
I only wish this would happen.

Thanks so much, Nirek! You and me both!

AdLib, at the moment the “star bar” is unavailable to me to rate this; but if I could I would give it 5 stars. Hilarious!

Love the way Pence was so coy about the Oval Office redecorating plans. That’s exactly the way he would act if this actually (fingers crossed) happened.

Hi Kes, thanks for letting me know, the stars are back now.

Glad you enjoyed it! I think Pence is rubbing his hands like Mr. Burns on The Simpsons as each shoe drops on Mueller’s investigation of Trump. He imagines he’s going to be president soon and make executive orders preventing all American men from being in the same room with a woman unless their wife is there.

He might want to send a gold-edged copy of that executive order to Roy Moore when he does issue it, AdLib. He’d have to modify it slightly though: “American men may not be in the same room with a woman or female child unless their wife — and several armed guards — are there.”