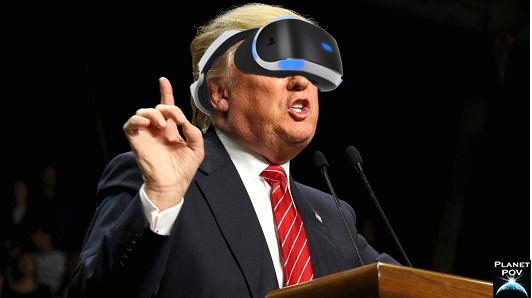 As it becomes increasingly harder for Donald Trump to escape the reality of an intensifying criminal investigation into his campaign’s collusion with Russia and his potential obstruction of justice, as well as his mounting political impotence and legislative failures, Trump has decided to wear a Virtual Reality headset for the rest of his time in office.

According to sources close to Trump, he will be immersed in a virtual reality where all Americans look at him with love and trust and his hands appear much bigger. He will see huge, adoring rallies wherever he goes, a homeless Bob Mueller will be begging for spare change on Pennsylvania Avenue and he will be able to visit a heavily tattooed Hillary Clinton in the federal penitentiary.

In this VR world, Trump’s face has been added to Mount Rushmore, portraits of him populate most public places (like Kim Jong-un in North Korea) and Vladimir Putin is always waiting for him in the jacuzzi at Mar-a-lago.

White House Press Secretary, Sarah Huckabee Sanders, was asked about the consequences of Trump’s unusual decision at this morning’s daily press conference but she too was wearing a VR headset and headphones and while she could not hear or see the press, her replies to questions were as responsive as ever.

New Chief of Staff, John Kelly, was quizzed on the dangers of Trump being immersed in a virtual reality for his remaining three and a half years in the White House (at most) but Kelly assured the press that they wouldn’t notice any difference.

“The President is able to chew gum and walk among infinite cheering crowds of topless women at the same time,” Kelly noted. “He will be just as engaged with congressional legislation, successfully promoting his agenda and respecting his constitutional duties and authority as he has been.”

In response to a question about the public perceiving Trump as being more disconnected from truth and reality, Kelly replied, “That’s virtually impossible.”

Thanks so much, Fergie!

Well that will be much cheaper than the alternative of the U.S. government (republicans) having to supply the rest of the 7 billion of us, minus his nutty fan club, with a pair until he’s carted off to an asylum or jail cell.

Thanks Kalima! I think the whole Trump admin will be wearing them before the end of the year. That way, when it comes to their delusions and lies, they can all be in sync…as they walk off a cliff thinking they’re boarding Air Force 1.

If I Only Had a Brain