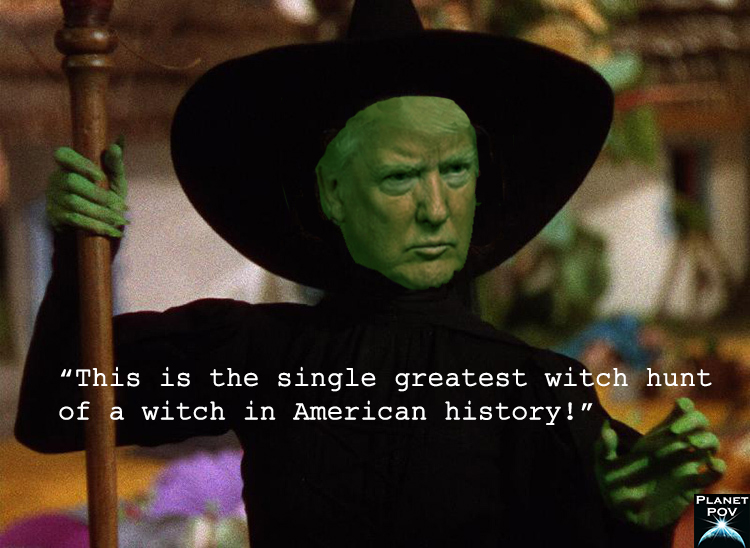 Donald Trump tweeted angrily today, continuing his theme of attacking the investigations of him and his campaign’s involvement with Russia as “witch hunts”. However, as has happened in some of his previous tweets, he seems to have unintentionally undermined himself:

White House Deputy Press Secretary Sarah Huckabee Sanders responded to reporters’ questioning on this by saying, “I think his curses speak for themselves.” Meanwhile, a small group of white male Republican Senators meeting in secrecy to draft a bill dictating doom and destruction to the health care of all Americans criticized Trump’s confession to involvement in the dark arts as “deeply disturbing”. Defending Trump, the eye of a Newt Gingrich turned to Hillary Clinton, “Why is no one talking about Hillary’s being a witch? She turned me into a Newt!”

Trump’s fascination with witchcraft allegedly began when he was a young child attending boarding school. Being constantly ridiculed as “Weenie fingers!” “Fingers weenie!” and “Weenie weenie!”, Trump created voodoo dolls closely resembling the boys he saw as harassing him and when sticking pins into the dolls didn’t work, he sued the dolls.

Trump has vowed to continue tweeting against what he alleges is “the greatest witch hunt of a witch in the history of the world!”

“Can you believe all of this? Such a witch hunt, unbelieveable, it’s so sad! Like I’m a witch? There are reasons why I can’t float or be seen in a mirror, believe me, it’s not because I’m a witch! I just don’t want to, If I wanted to, I could. But I’ll tell you this, in fact, I want to tell all those witch hunters at the FBI something, you like not being a toad? Ask yourselves that, that’s all I’m gonna say,” Trump smirked before transforming into a weasel then becoming irritated because no one noticed.