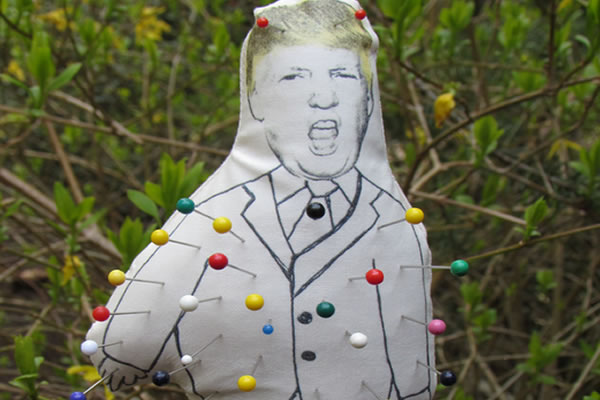 Donald Trump released a series of stunning tweets today claiming that he knows for a fact that President Barack Obama has been using a Trump voodoo doll to hurt him and damage his presidency. Without providing any evidence other than a cartoon from KlanWeek, Trump declared that there is no doubt about his claim.

Coming right after a week that saw the Trump administration rocked by more scandal over Russian coverups and contacts and on the heels of Trump’s unfounded claim of Trump Tower being illegally wiretapped, some have voiced caution about this latest charge. At the same time, most press outlets have run with this as their top story, assuring the public that by including an explanation that it is not backed up by fact, it is justified as news. Some will recall this same situation when the press ran front page headlines about the Earth being flat when NBA star Kyrie Irving’s claimed that to be the case.

On Capitol Hill, Republicans in Congress held an impromptu 200 yard dash just as reporters were approaching them to ask for their responses on this then locked The Senate door and kept yelling out, “Nobody’s in here!”

Trump Senior Adviser, Kellyanne Conway, just released from a two-week timeout in the White House fruit cellar, affirmed Trump’s claim. “Of course there’s proof that Obama is using voodoo against Trump and that he’s to blame for everything bad that has been happening and will ever happen. Look, first Mr. Trump tweeted out what he knew to be a fact because he knew it, then it was in the media. Now, if anyone asks for proof about this story, we can quote the story from many papers and cable news stations. Do you think they’re all making it up?” asked Conway before being escorted by Secret Service back to the fruit cellar.

President Obama has not responded directly to this accusation though he did note that Trump seems to become more publicly unhinged the more he worries and quipped to reporters, “I  do like to needle him.”

Frank Sinatra – You Do Something To Me