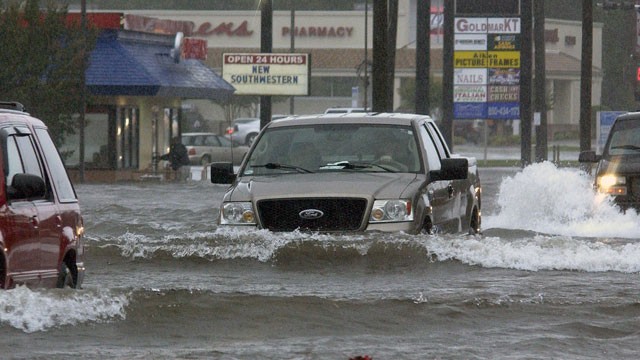 On the heels of its latest success in branding the Umpqua Community College shootings the fault of gun control activists who fight against guns being allowed in schools and elsewhere, the NRA has announced its new “NRA’s Universally Thoughtful Solutions” (NUTS) think tank that will offer their unique brand of reasoning on a variety of other social and political issues.

This morning a variety of position papers were released. In one, responding to the record flooding that has gripped South Carolina through torrential rains, NUTS proposed that the only way to stop flooding from a bad storm, is with flooding from a good storm. NUTS has hired planes to seed clouds over the inundated South Carolina in hopes of bringing about “good” rains.

When asked about those who believe in flood control instead to stop the flooding from occurring in the first place, Kihls vigorously attacked that approach. “It’s a slippery slope, first they’ll make it illegal for water to be openly carried by streets, then they’ll take away our rights to own water, they want to take away all of our water and this is how it starts!”

Kihls is leading a new initiative to pass laws in all fifty states that allow for the concealed carrying of water without a license. As part of a nationally organized protest next month, NUTS is asking all NRA members to join this protest by marching together across the country after wetting their pants.”This will show the true character of our kind of NRA members, we’ll be wetting our pants again and again and nothing is going to stop us,” Kihls proclaimed.

“I’ll give you my water when you pry it from my cold, dead underwear,” Kihls stated bravely.

Ad, you have captured the “logic” of the TeaPotty “NUTS” perfectly! Their “logic” is illogical!!

Huck said something about the shooter being stopped by a cop with a gun. We just learned the other day that that is not true, he killed himself like the coward he was!

The NRA is wielding too much power. Most gun owners are honorable people who bought their guns legally. Have hunting permits and have trained in safety. At least here in Vermont.

If you have to have a picture ID to drive why not to buy and own a gun? The”NUTS” you mention also want people to have photo license to vote, so they should have to do the same to have their guns.

After Vietnam I sold my rifle and quit hunting because I had had enough shooting to last my lifetime. But, some people like shooting at targets, deer, or other game animals. That is fine, but they don’t need automatic weapons for that.

I could go on but I would be preaching to the choir.

Ad, yet again the US fails to act appropriately to a tragedy. This will be given more lip service. No real policy will be put into law. A do nothing Congress coupled with a far too polite President.

I don’t doubt that we can right our ship on all issues, it just may be left for your daughter’s generation. Hopefully, it won’t be too much scorched earth…

This sounds exactly like what these people would propose. The sad thing is, they appear to be in control of our government, therefore their actions are encompassing the rest of us. Your analogy is so spot on, it is such a ludicrous argument they make when they attempt to try to dissuade those that are unfortunate enough to believe the government is coming after them and their guns….didn’t these people see the SWAT teams in Ferguson? Haven’t they witnessed the continued assaults in the Middle East against first one country and then another? What in the world do these people think they are going to do if the government decides it wants to take their guns? If they think they can fight the Department of Defense, I have news for them.

Doesn’t it make you wonder sometimes just how low people will go to continue to prop up the weapons industry? Doesn’t it make you feel sorry for the stooges that are making their jobs so much easier because they can’t seem to bring themselves into the 21st century. Why would these people want to continue to live as though they were still in the 1800’s or 1700’s even. When will they learn the fact that the person most in danger of the weapon they own is they themselves. Just look at the plethora of fatal mass shootings that have occurred this year. What has happened to those that perpetrated the crimes? They have either been terminated by law enforcement, or have taken their own lives with their precious gun(s)…what good did having the guns do them?

I know, there are those that will say, not everybody with a gun uses it for mass murder, or for attacking themselves or others…to that I say, that is true. There are many who own guns for purposes other than committing crimes. However, those people have a hunting rifle, or if they are in some sort of business where they need to carry a weapon for protection, etc., they have a weapon, maybe two, not 14 or 20. And, also too, those people I just mentioned have mostly passed background checks, have a hunting license, and obey the laws.

If only we could say, only the people who are conscientious own weapons, if only we could say, the people who own weapons own them because they have good reason for it. However as we all know, the weapons of which we speak, that are flooding our streets and our neighborhoods are not in the hands of those people. Doesn’t it make you ask yourself where all these weapons are coming from, and why it is many of them can’t even be traced back to an owner? How did so many guns get into poor neighborhoods where many people can’t even afford to feed their families, but weapons, there’s a shipload of them, and easier to get than food.

When will the citizens of this nation wake up? As I said, the flood analogy makes just as much since as the gun analogy, maybe even more sense. We can’t live without water, but we damn sure can live without guns.

Thank you for writing this article AdLib, I was going to write one concerning this tragedy, but I believe I have had my say by replying to your wonderful article. Thanks for doing it in that wonderful way you do with wit and comedy, I’m sure I wouldn’t have thought to couch it in that manner…excellent job!!! Thanks again. 🙂