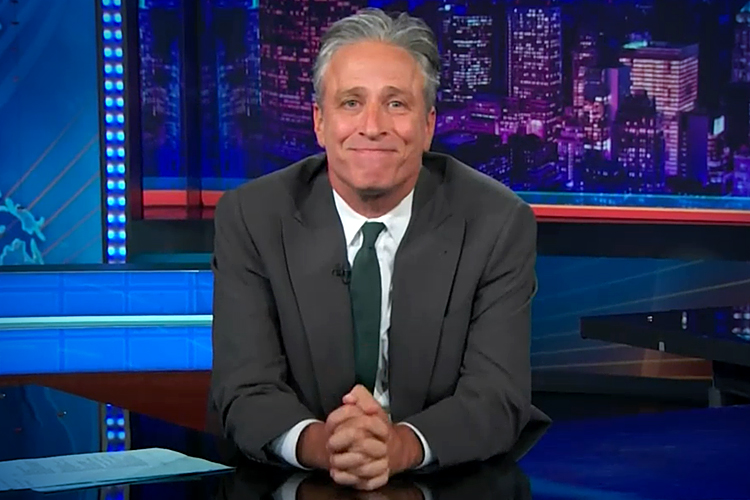 It is the end of an era. Almost. Jon Stewart announced last night on The Daily Show that he will be retiring from The Daily Show after almost 16 years of service to America as it’s premier political satirist (not to mention all of the talented writers and performers that have supported him on his show). He isn’t sure when exactly his last show will be. Though it won’t be until months from now, it will be this year.

As a 21st Century Will Rogers, Stewart has spoken truth to those in power with an astoundingly consistent and brilliant wit and much to his own surprise, became the primary source of news for a generation.

First Stephen Colbert then Jon Stewart, it’s a bit of a devastating one-two punch of loss to those who’ve relied on their uncompromising and sharp edged sense of humor. They’ve been our surrogates to respond cleverly as America’s conscience when the worst things are said and done in politics and the media.

So why is Stewart bidding adieu to The Daily Show and the millions of his fans around the world?

In his show last night he alluded to his feeling restless as a creative person. Though he readily admits that this may be the one thing he’ll ever be the best at in his life, one can imagine that 16 years of working intensely to put together a professional show in just one day every day (well…four days a week) using that day’s newsworthy events could become a bit much after a while.

Stewart also referred to his desire to spend time with his family which is understandable. He started hosting The Daily Show in 1999, before his current marriage and before he was a father. Some people in show business are absent parents by necessity of their profession, children are often raised by nannies and much is missed by both.

What really should have tipped off people that this was coming however, was Stewart’s directing the film, “Rosewater”. It seemed a bit of a surprise and departure for Stewart to leave his show (though in the very able hands of John Oliver) so he could direct a film but it revealed his desire to do something more than continuing to host The Daily Show.

It was an ideal project for Stewart to direct and to use as a psychological springboard to begin moving on from The Daily Show, it was a vital international story that Stewart and The Daily Show had been directly involved in. Rosewater made a powerful statement about the freedom of expression that Stewart’s career has relied on and that most Americans take at least a little for granted.

Jon Stewart has been the one reliable person to turn to when The Emperor boasts about his elegant new clothes or the snake oil salesmen in politics, the corporate world or the media try to deceive and prey upon the public.

Humor can be mightier than the sword, certainly mightier than the hubris of those who see politics as a media game for keeping Americans turned against each other to undercut their focus and power. What could be a better example of Stewart yelling at The Emperor, “Hey! Buddy! If I wanted to see your junk I’d have gone to your garage sale!” than when he destroyed the conceit (and the future) of the original Crossfire show on CNN:

And when Bush’s Great Recession gripped the nation in desperation and panic, while the Tea Party Republicans were whipping up hatred and fear in the run up to the 2010 elections, Stewart and Stephen Colbert headed up “The Rally To Restore Sanity And/Or Fear”:

(Not to forget the Peace Train vs. Crazy Train duel:)

We still have a number of months left to enjoy the talented Mr. Stewart as he continues to skewer those ripe for skewering. The Daily Show will continue with a new host after he’s left and hopefully it will continue to be the witty bulwark against the elite and powerful that it has been. Meanwhile, Jon Stewart will have left a lasting imprint on American culture and a generation for being that voice of insight and wit that left us smarter and smiling week after week.

Here’s a clip I think you missed. Stewart’s 20-minute opus on Glenn Beck.

Haruko, so nice to see you!

Yes, that is one of my favorite bits by Jon Stewart!

There are a number of clever political satirists out there but no one who does it the way Jon Stewart has. Glad we still have him for a while but he will be greatly missed.

I don’t blame him. I had no idea he had been doing the Daily Show for 17 years. That’s a long time to do anything without burning out. I’ll sure miss him, though. I’ve been missing Colbert.

Jon Stewart made me laugh out loud at times,something I don’t do often.I am a bit jaded.But he was THE BEST at satire

It’s kind of sad that Jon won’t be around for the run up to the 2016 elections to lampoon the crazy GOP candidates. I think it’s going to be a real circus this time around.

I have seen very few of his shows in full, but what I have seen was always brilliant. Those will be some very large shoes to fill for whomever takes over the show. I wish him luck for his next project, and hope I get a chance to see it over here.

Gokororosama, Jon Stewart. It’s been fun laughing along with you.

I’m not really surprised that Stewart is going to leave TDS. Of course his foray into directing a story that needed telling, was a bit of a hint.

I think he probably realized he has gone about as far as his role as satire-in-chief could take him. I think, as a progressive thinking person, he realizes that there are other directions and challenges that may lie ahead for him.

Go out with a bang and not a whimper. It’s always been my motto.

Ad, I have never seen a clip from Stewart that was not good. He reports better information than the “news” channels do. More accurate and more to the point. I confess that I can’t stay up to watch his show but have seen many clips. The man is excellent and honest in my opinion.