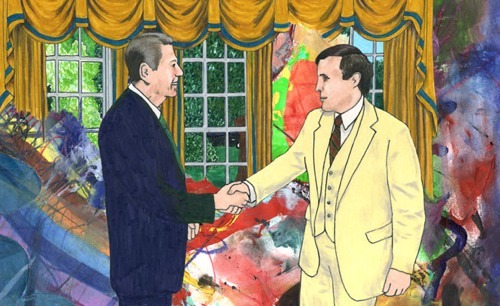 We were on on the verge of a depression, barely missed total bank melt down, and must muddle through a few years of recovery before anything like full employment and prosperity can be expected.

We are ensnared in two intractable wars, plus a war against deranged religious extremism in general, we have no coherent plan for middle east peace nor any idea of what an effective stance on the conflict between Israelis and Palestinians should be.

Our economy is utterly dependent on fossil fuels.

There is some sort of discussion of health care and insurance reform, or so I hear.

And so now in the House 99 Repugs and one Dem from MO (it’s bipartisan!!!) have sponsored a law that says that the President must get the approval of the Senate for every last man jack of his advisory team. Karl Rove would have fallen under this law. Yet Karl is a prime mover here.

Yeah.   This is how adults should be spending their days? What a steaming pile of crap.

The horseshit of the Birthers is running down. Sentient people are realizing how they appear utter fools arguing that the president was not born in America.   So the new bogus complaint is trotted out.

What will it be next month? When will they come to terms with a negro as president?

donaldw6 had a good find Nixon’s New Energy Czar. The biggest thing I always hated about naming of czars what they never seem to accomplish their mission.

Reagan invented the czars and Bush II appointed more than any predecessor. But now it’s a problem. Face it this is just politicians pandering to the Faux News watching right wing radio listening base of the Republic party.

I personally never like the idea of czars to avoid the confirmation process but the right wing has made ever confirmation political at the detriment of the administration doing it’s job. The right wing is so vested in President Obama failing that they will not mind taking this country down with it. “Country First” my ARSE.

The answer of the last question is NEVER.

Czars are generally credited to Nixon, but there are examples from FDR.

Was Nixon the first one to use the word czar?

This is just this week’s distraction.

Karl has a dozen more ready to go.

KKKarl is 0-2 last two elections and highly overrated. Events helped turd blossom much more than masterful strategy. Any political mode of strategy that does not include competence is doomed to fail eventually.

As much as I’d like to accept that, I can only say that regardless, he is going to keep going on.