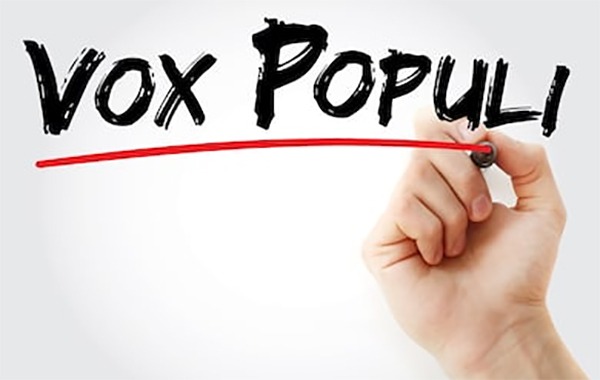 Do not know how long I’m staying, I’m just pissed and tired. Khirad 2 hours ago

Can we address Amy Coney Barrett’s little girl voice though? I just heard her for the first time. Khirad 2 hours ago

Same here and it’s been gooing onn for nearly 4 years. But think I can see the light at the end of the tunnel. Oly 39 days. AdLib 2 hours ago

Only AdLib 2 hours ago

Hi Khirad….what pissing you off and tiring you out? MurphTheSurf3 2 hours ago

As if I did not know!

Putting aside her religious and political extremism, she’s oly been a judge for 3 years, how is that qualifying for a lifetime appointment on the SCOTUS? AdLib 2 hours ago

The RBG thing. And humanity. Like, I admire the Republicans. They just don’t give a shit. I admire that in a way. Khirad 2 hours ago

Well, we see the GOP for what it is with Notorious RBG – Empty, Soulless and downright evil pinkpantheroz 2 hours ago

AD, that’s because we have shame. Khirad 2 hours ago

So are we all agreed? Dems get unitary power, end the filibuster, expand the SCOTUS to 13 members giving a 1 seat majority for us, save the ACA, Choice, Brown v. Board, etc. And screw the whinning of the Repubs. AdLib 2 hours ago

Agreed, ad! Bring on the tumbrils! pinkpantheroz 2 hours ago

I’m getting a new laptop soon, the keyboard is worn out on this one and omits or duplicates some keys. AdLib 2 hours ago

YES, I do NOT CARE anymore. WHINE, call hypocrisy on us. YOU poisened the well. I’m done playing nice. When they go low, KICK THEM Khirad 2 hours ago

There was “spontaneous” Trump Parade in town last Saturday….trucks and cars with banners and flags that blocked the major intersection for nearly an hour…..people on trucks harangued the folks in town. I and three others went to the policy dept and asked if the parade was permitted or unlawful. The officer there did not answer and that was the answer. So we called county sheriff and they responded ordering the unlawful assembly to move on…..and that was it……no tickets, no summonses, no tough words….just “some lefties don’t like you guys….” MurphTheSurf3 2 hours ago

Mine went to laptop heaven in a puff of smelly smoke on wed. Trying to find my wifi network password to configure beaut new whizzbanger pinkpantheroz 2 hours ago

Biden’s national lead is growing. Polls have him ahead in all swing states and now OH too! In a virtual tie in TX! He could have a massive win. AdLib 2 hours ago

I just got mine back after minor damage. Why can’t I screenshot or do all my accents anymore? Khirad 2 hours ago

Option and command are like ignoring me… Khirad 2 hours ago

And I think Trump’s announced coup has scared some of the few undecided towards Biden. Then after the debates? I think Trump is in a tailspin. AdLib 2 hours ago

If Biden wins……even a very clear win…..I know there is going to be trouble like that parade…..I am glad I will be in Wi. MurphTheSurf3 2 hours ago

Good evening, everyone. glenn 2 hours ago

I would love to be one of the SS guys who has had to put up with him for 4 years and now has the privilege of frogmarching the cretin out of the WH by the Front door. pinkpantheroz 2 hours ago

Murph – And at the same time, Parsons and his wife have COVID and hospitals are nearing capacity as COVID spikes in MO. Keep America Dying! AdLib 2 hours ago

PPO….if that happens it will be the federal marshalls. MurphTheSurf3 2 hours ago

It’s not you, it’s me. I’m gonna drop out early. Just wanted to say hi. Also, get into the send me free flags charity if you haven’t seen my pet project! Have a good night. Khirad 2 hours ago

Hope you stay healthy as you can, Murph pinkpantheroz 2 hours ago

I’m coming in the middle of the convo, I know, but just a few thoughts from what I’ve read so far. First of all, I’m with with you Khirad, kick the bastards when they go low. I just hate fucking republicans! And the RTLB’s supporters. And Ad, I agree with your scenario regarding what happens when Dems get in power. Also, I’d add the Green New Deal, if not all of it, at least push solar and wind power as energy alternatives. glenn 2 hours ago

Khirad – That’s very frustrating! Are you sure it’s not a software thing? AdLib 2 hours ago

Well PPO….I will be in Wisconsin from early October through November election week working on voter turnout. MurphTheSurf3 2 hours ago

PPO–Yes, I’d like to be one of the SS doing that, too. And that is what every newspaper, media outlet, and cable pundit should be telling the RTLB. Get your fat ass out of the White House or we’ll throw it out for you! glenn an hour ago

Murph – I think either way, the streets will be dangerous. Biden will win, I’m now confident of that and I expect the racist militias and Trump cultists rioting and attacking people far worse than happened during the worst of the George Floyd/BLM protests. AdLib an hour ago

Prepare yourselves folks, I thiink we’re in for some very scary times. AdLib an hour ago

‘Nite, Khirad glenn an hour ago

Ad–I’m still not fully confident that Biden will win. We cannot be confident; we have to be vigilant and GOTV! glenn an hour ago

Ad, if the RWNJ white supremacist nazis no longer have der fuhrer to give them dutch courage, won’t they all slither back into their ooze? they’re cowards, mostly. pinkpantheroz an hour ago

Murph – I heard aboout the 13-13 elsewhere and it clicked, makes the argument very sensible and understandable. Then expand lower courts tooo and more cases can be handled, reduce huge delays in the court. And create an express program, allowing Congress and goverment to get quick rulings. AdLib an hour ago

Ad–It is so scary that the RTLB’s cultists will wreak havoc on the country. glenn an hour ago

PPO – Poor SS guys being forced to get COVID and look after that old, fat Baby Hitler. AdLib an hour ago

Ad, and re-federalise the prison system and stop the for-profit ones. Decriminalize weed. pinkpantheroz an hour ago

Murph–you and I are the worriers….mainly because we live in red states. glenn an hour ago

PPO….there is a 2.5 month space between the election and inauguration he can, and he will make a lot of trouble. MurphTheSurf3 an hour ago

But I think it would be the US Marshalls who would have the authority to drag Trump out. AdLib an hour ago

PPO–The RTLB’s cultists still have between November and January to wreak havoc. glenn an hour ago

Glenn…being in red territory gives us good cause to fret…. MurphTheSurf3 an hour ago

Murph, will he still have the drawing power for the media? they don’t like losers, just like him. they will be concentrating on attacking Jow from the onset. pinkpantheroz an hour ago

Joe pinkpantheroz an hour ago

PPO….Trump makes awful (which means good) tv…..the cameras will follow him and he will wreck havoc. MurphTheSurf3 an hour ago

sadly, Murph, you may be right. and they will take delight in it as well. Ratings, Ratings. pinkpantheroz an hour ago

Ad, even sign off all the outstanding bills will take a while pinkpantheroz an hour ago

AND, IF (WHEN) we get unified Democratic Government the democrats need to tar and feather every member of the Trump admin who abused power and the members of Congress who cooperated with them. MurphTheSurf3 an hour ago