Home Elections 2020 Elections Why buy Greenland? Because it’s valuable (or so Trump’s been told) 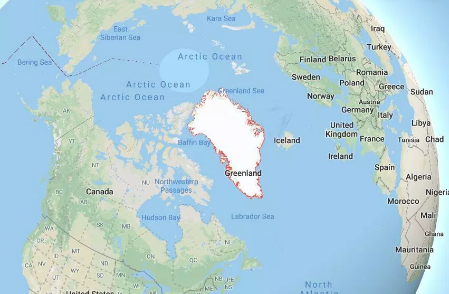 President Donald Trump has floated the idea of buying Greenland multiple times in the last two weeks. Danish Prime Minister Mette Frederiksen has called the notion “absurd.” Even so, there are sound reasons why major powers are more than a little interested in this huge piece of real estate.

The widespread interest in Greenland is just the latest indication of the island’s increasing geopolitical and economic importance.

Greenland s an autonomous state that is part of the Kingdom of Denmark. Greenlanders have extensive self-rule and manage their own affairs in everything but defense and foreign policy. They have their own parliament and are also represented in the Danish parliament with two members. They recognize the Danish queen as head of state.

Greenland’s strategic value is linked tightly to new North Atlantic shipping lanes opening up due to melting polar ice caps (so I guess there is some good news when it comes to global warming). The new lanes have dramatically decreased maritime trade travel times, which generally includes traveling through the Panama or Suez canals to circumnavigate the world.

Greenland is the largest islant in the world with 80 percent of its 811,000 square ice-capped. It is the home to nearly 58,000 people who are mix of native Greenlanders, indigenous peoples, and immigrants from Denmark.

Greenland’s largest economic drivers are fishing and tourism, but the island has drawn rising interest due to its vast natural resources including coal, zinc, copper, iron ore and rare minerals.

There have been expeditions to assess the extent of the nation’s resources, but the true quantity is unknown. Studies also show that it has world’s largest remaining oil resources. Of note….nearly all of Greenland’s energy needs are addressed using renewable sources.

Greenland and Denmark have both expressed major reservations about development of natural resources having a significant negative impact on the environment and could provide inroads into the exploitation of the Arctic.

China, which is embroiled in a trade battle with the U.S., is looking to develop a “Polar Silk Road” of trade through the North Atlantic shipping lanes. China proposed building new airports and mining facilities on Greenland in 2018 but faced opposition across Europe, especially from NATO leadership and the EU and withdrew its offer.

The U.S. and Greenland have low level economic interaction but they have had an agreement since World War II to house American military assets at several bases on the island.

Thule Air Base, America’s northernmost Air Force base, has operated since 1943 in Greenland and has a ballistic missile early warning system and satellite tracking system.

Well, Murph let’s be real. Trump is blithering idiot of a person. His interest in Greenland is fostered by his own ego believing because he thinks it he can just go off and do it. Couple that with the sycophants he surrounds himself with who put such foolish thoughts in his empty head only to see how far the can control this fool.

In a Daily Beast article [https://www.thedailybeast.com/trump-invited-himself-to-denmark-before-canceling-trip-danes-say] claims to have suggested the idea to Trump. If that is true it goes to show far too many in the Senate are more than willing to take advantage of Trump who clearly is showing signs of possible Alzheimer disease. He is at the age where his father was when he was diagnose.

What is truly scary, is the weak knee members of his staff are to damn afraid to stand up to him, or too entrenched in ripping us off to do right by the American people. Even worse, are every House and Senate Republican looking for any place to hide so they don’t have comment on his actions. They are an integral part of his manic behavior and every second, minute that goes by with their silence is taking us closer and closer to losing our Democracy.

When Hillary said the last debate he was unfit to lead, she was clearly sending a warning.

Trump is over his head and totally incapable of dealing with the multitude of issues that are happening through out the world, many he started himself because of his utter incompetence and his messianic complex thinking somehow he is the ‘chosen one.’

I would say God help us, but I’m she is looking down on us and saying, “sorry folks you’re on you own with this one.”

I agree…Trump is only spouting what he is picked up off the ground around him…spread by those who know how to work the man…..feed his ego, give him a talking point that makes him look strong, create a mythic story he can buy into, make his own and then move it into the hyberbolic stratosphere.

Trump is over his head and totally incapable of dealing with the multitude of issues that are happening through out the world, many he started himself because of his utter incompetence and his messianic complex thinking somehow he is the ‘chosen one.’

I would say God help us, but I’m sure she is looking down on us and saying, “sorry folks you’re on you own with this one.”

Very nice overview of Greenland and the value it has to offer.

I liked what one pundit said about the lunacy of trying to buy Greenland, “Why buy when you can rent?”

The US already has an airbase there so we already have the strategic value there.

And let’s think, when was the last time that one country bought a large swath of land from another country? 1867? When the US bought Alaska?

That’s not the way the world has worked since 1867, no one but an insane racist would think you can buy part of another country in 2019.

Maybe he has annexation envy of Putin and Crimea?

“Why buy when you can rent?” So clever, so true. Truman’s admin actually made a formal offer to Denmark to pay for Greenland in gold! A look at the map tells one why that seemed logical in light of the emerging cold war. You make an outstanding point re. Trump’s thinking….he is both out of date and out of synch. Annexation envy of Putin……..while blaming Obama for not stopping Putin. Hate the man. Really hate him.

Well done, Murph. You’ve just given us a very concise and up to
date view of Greenland and its growing importance in the world!

Did you know that Truman’s admin actually made a formal offer to Denmark to pay for Greenland in gold! A look at the map tells one why that seemed logical in light of the emerging cold war.

I did know about the Truman administration’s offer; but in the interest of full disclosure, I learned about it only several days ago.