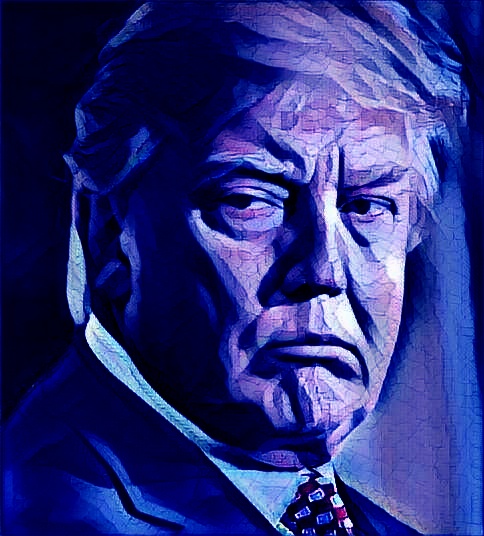 Donald Trump is a guest in my house. But, he insults my friends, and my family – it makes him feel important.

He is a rabid racist, and constantly uses offensive slurs. He always speaks about people in the group, as though we didn’t learn that that is wrong ages ago. Even children know that. Now, my neighbor isn’t sure if I wasn’t always a racist, hiding my true colours.

He curses like a convict. He steals anything he wants: it seems like he doesn’t care about anything at all except stealing, and insulting people – I think that he wants to set a world record. Insulting people is his favorite sport and gives him endless pleasure. He never pays for anything.

He’s a perve, and a really disgusting one. He talks about, and touches, his own daughter in a way that makes me feel nauseous. He brags about molesting young women, a fraction his age, as though it is, and should be, the signal accomplishment of any young man on the way up – to grope little girls. (I hope he goes to prison, and they give him to the “animals.”)

The most horrible thing about him being part of our lives is what he’s doing to the children, my children. He’s changing them. They are starting to remind me of him (or was that a nightmare I had), and that makes me feel hollow, like my life is over and it never amounted to anything.

It must be me: the only sane answer is that I have gone insane. This can’t be happening. My government can’t be just simply liars and thieves that have to hide everything that they do because everything that they do is crooked. Christianity can’t have been corrupted into a hate cult. We can’t have regressed to the point where our selected officials do nothing at all, except constantly repeat the list of our “enemies:” foreign or domestic, real or imagined: an evil mantra.

Anti-intellectualism can’t have won. It can’t have become the ideal for millions. Tribalism cannot be the norm.

I can’t have given up on them, who were my friends, and my family. I can’t, but I have. I know that it’s all wrong, and I’m tired of it. I want it to end.

My Lord taught us the difference between right and wrong. Trump teaches that to lie is to tell the truth.

Trump lies all the time about who is, and who’s not, a genuine American. I have never met anyone who was less an American than Donald Trump. I want this man out of my house.

This is what Reality TV has done to many. He acting for his voters. Look at his Rallies. Does he campaign on things he going to do?
There is nothing Presidential that he does.

Steppenwolf, I can assure you it’s not you who is insane but would-be Führer
Donald Trump, the intellectually stunted, sociopathic malignant narcissist who is
well on his way to establishing a fascist dictatorship in the U.S.

The ghost of one of his idols, Adolf Hitler, must be watching his progress in rapt
admiration. And that’s not surprising, as Hitler was as much his spiritual father
as the odious, corrupt, and racist Fred Trump was his biological father.

American legend has it Lord Cornwallis had the British army band play “The World Turned Upside Down” when he surrendered to General George Washington after the Battle of Yorktown. In less than three years Trump has essentially turned the U.S. upside down as he’s maliciously sown and gleefully reaped a dangerous division in the American populace greater than any since the Civil War.

As you say, “I want this man out of my house.” If we don’t have the grit and will
to evict him, it will become his house and our prison. It’s already happening….

In short, he’s not supposed to act this way, not as a human being, and certainly not as a president.