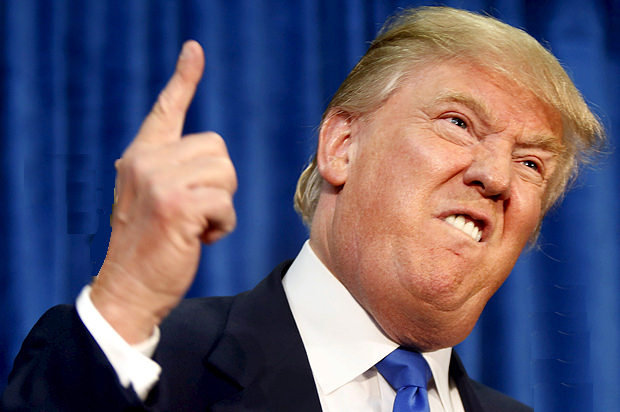 In a defiant response to the recent hammering he’s taken in the press for his actions and words, Donald Trump has filed a lawsuit in federal court and requested a restraining order on all members of the media and all American citizens from repeating or remembering anything he’s ever said.

“Look, what I say is my own intellectual property, it belongs to me and if I don’t give permission for people to use it, that’s theft, plain and simple,” Trump declared after giving reporters limited permission to repeat his words in print. “Are we living in a communist country? Where we can’t own what’s ours and people can just steal it from us whenever they want? I don’t think so!”

Trump stated that whatever he’s said in the past is copyrighted by and the property of The Trump Organization and from now on, he will pursue monetary damages against anyone who infringes on that copyright. He explained that it not only covers those who repeat his words but those who keep “his property” in their minds.

“I saw Crooked Hillary yesterday repeating things I’ve said as a way to attack me. If she thinks she can take my words like that, which are my property, and use them against me, she’s in for a big surprise, believe me,” Trump assured.

Trump’s lawsuit not only seeks damages and remedies against those who speak or remember his words but also goes after those who remember or discuss his past actions.

“When I make any decision to do anything, I’m making something, right? That’s manufacturing and in America, when you make something, you own it,” Trump affirmed. “If I made the most magnificent table, and believe me, if I made a table it would be magnificent, can a reporter or some person off the street just say they own it now and use it for themselves? Of course not!”

Despite his filing what he rightfully declares as the “yuugest lawsuit in the history of the world”, suing around 320 million Americans, Trump insisted that he wasn’t doing it to benefit himself.

“Now I know the PC Police out there will get all crazy and whine, ‘You want to limit the 1st Amendment and our right to Free Speech.” First of all, I love the 1st Amendment, it’s number one in my book when it comes to The Bill of Rights. Second, I think activist judges have pushed their PC mentalities on it for far too long and the 1st Amendment is now unconstitutional,” lectured Trump.

“The Democrats are always saying they’re gonna give you free things, like free college, free health care and free speech. Can I just say, nothing’s free! We can’t afford free stuff anymore, we’re in trillions of debt we can’t pay off! So in President Trump’s America, say bye-bye to free stuff and that includes speech. You want more jobs, charge people for speech. That’s a whole new industry we can create that’ll bring tons of high paying jobs, trust me! Let’s make America great again and maybe we can start to do that by basing our elections on something truly American, a mafia style threat that says, ‘You didn’t see anything, you didn’t hear anything! Vote Trump!'”

Trump won’t get me. Know why? Because I have a good memory, the best memory. And I remember things. Good things. And they are all terrific things. The best. The kinds of things that will Trump grate again…

James, make Trump grating again? No problem, he does it himself!

You’re next Ad, he will find you and then you’ll pay, just you wait and see!! Isn’t he amazing though?? I mean he can stand and deny he ever said it with the video playing in front of him, and the best part, his idiot followers can do the same thing!!Another fine bit of writing.

gyp46, I welcome a Trump lawsuit. I know a great Mexican, Islamic woman who’s a judge and would love to take the case!

Loved the article, AdLib and will be back later. To once again prove what a slimy crook he is, I just read this AP article.

Btw, when I read your article it wasn’t much of a jump to actually believe he would say that, and that is a really scary movie script. To begin to feel that it’s normal to hear these insane rants until he disappears from the headlines and 24 hour cable tv, is like living in an alternate universe.

To prove his “mafia” style campaign threats, here is one of his real life mafia connection.

Kalima, actually, Trump’s dialog kind of writes itself. Now, there is no such thing as too absurd for him to say so I look at parodies more like predictions about what may come next from that lunatic.

I have no doubt that the Clinton research team is digging deep on finding all kinds of things out about Trump that are awful and I’ll bet they save a juicy one to spring as their October Surprise.

It seems more and more plain each day that Trump will indeed self-destruct, his maniacal nature may be red meat to the loons following him but he’s not going to win over the vast majority of undecideds (how stupid can they be to be undecided though) coming off so offensive and unhinged.

Remember in the GOP primaries, late deciders broke decisively against Trump. I think we’ll see the same thing happen in the GE.

Hope springs eternal that most voters will wake up from this nightmare before the impending crash, and I so agree about the “undecided”. Four years of insane chaos with America sliding off the map on foreign policy and international support, or a dem who won’t screw up all that President Obama has worked so hard to change for the American people? Why would any sane person have to think for more than a second about that choice?

What would they rather have? A cold or an incurable brain tumour?

Kalima, unfortunately I think the “uneducated” who Trump loves having as his base, might prefer a tumor thinking it’s actually slang for “two rumors”.

But the better educated will recognize Trump as a human brain tumor…or a Trumor?

People too dumb to think shouldn’t be allowed to vote when so many decent people are denied that right by dirty tricks.

Just had a good look at that graphic you used and it scared the life out of me. What’s with the hair water slide?

I’d rather meet a “Walking Dead” zombie in an alley at night than trump any day. The man is positively disgusting to look at.