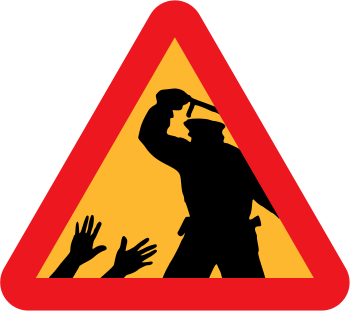 I had the misfortune of  watching Faux News yesterday in order to ascertain how the conservatives plan to defend the indefensible: The Killing of Freddie Gray.   Many vicious, hateful accusations and talking points were spewed to justify  the use of excessive force by police to “subdue” African-American males.

Vile Conservative  Point 1: Freddie was a drug dealer  and a drug addict.

Counterpoint:   A certain rotund conservative talk radio host is/was a KNOWN drug addict who forced his maid and “physician” to procure drugs illegally.  Shouldn’t he have been arrested and had his spine broken?

Vile Conservative Point 2:  The Police didn’t buckle him in because they were fearful for their lives

Counterpoint: Several cops subdued Mr. Gray, handcuffed his hands behind his back and lifted him into the paddy wagon.  How much more time would it have taken to strap him in?

Vile Conservative Point 3:  The cops deserve due process and there was a rush to judgement by the Attorney General

Counterpoint: Mr. Gray was arrested though no illegal weapon (the basis for his arrest) was found and he requested medical attention several times.   The cops ignored his pleas.  Where was Mr, Gray’s due process and why was there a rush to judge that he did not  require medical attention?

Vile Conservative Point 4: Some of the cops were black hence there is no racism.

Counterpoint: Some of the slave overseers were Black and some of  the Guards in the concentration camps were Jewish. These facts do not negate that those populations were deliberately targeted for slavery and anihilation

Vile Conservative Point 5: Rioting and the Poverty is due to the absence of a Black Father

Counterpoint: The riots in the 60s were due to high unemployment, limit education opportunities, police brutality and racism . These conditions exist today. And BTW,   the Black nuclear family was more or less intact in the 60s.

CD, I’m sorry it’s taken me a couple of days to get to your article. I worked the polls for a special election here yesterday and as you know — that will take you off line for a whole day at least!

You make such great points. (I have to hand it to you for being able to stomach Faux News even briefly for research purposes. I dropped cable a few years ago and even then it was nauseatingly racist. I gather it’s only gotten worse.) But the underlying point in your article is that this is a conversation worth having.

We really do need to confront our Crazy Uncles on their racism. I did that recently regarding an 87 year old guy (not an uncle, but an online “friend”). Predictably he blew up in rage. Don’t racists always do that when they’re accused of being what they are? They’d so much love to think of themselves as nice guys.

Others here have done such a terrific job of citing reasons for stress and poverty in our minority communities. I wonder if I might add one more. The rapid rise of the for-profit prison industry. There’s a huge incentive to arrest poor and minority citizens to keep the “feeder lines” flowing and profits high.

This is a racket that Marco Rubio in particular has benefited from. For more info, here’s a link to a story:

CD, I like all your counter points. The GOPers don’t have facts on their side. They have a lack of integrity!
That is why I like Bernie Sanders, he has integrity! He has facts on his side and can lay them out in an easy way for people to understand.

Nicely laid out and argued, confuseddemocrat!

As lame and obviously manufactured as these excuses are, it seems crystal clear that the blatant racism of the Right Wing in this country will make them say anything to justify all attacks and murders of African Americans.

There is no sense of principle, justice or fairness in the minds of these RW extremists. As Army attorney Joseph Welch once asked of Joe McCarthy, “Have you no sense of decency, sir, at long last?”

The definitive answer from Fox News and the RW is a resounding, “No”.

I think what we’re seeing in America today is the result of several contributing factors.

Racial discrimination and a lack of quality education, lower job opportunities, the creation of ghettos, and the war on drugs have brought us to where we are now.

Many, many black children have to grow up without a father because of the war on drugs. Drug dealing is an industry, not that different from legitimate ones. It’s a way to make money when there is a lack of legitimate employment opportunities. Young black men are faced with mandatory minimum sentences that often get them drastic sentences of 25- 50 years in prison, and that is for even non-violent offenders. The mothers of these poor kids usually can’t make enough money working, to adequately care for their children. These children are sucked into “the game,” (banging, or selling drugs) at a very young age. It’s really all they know, and it’s a vicious cycle of poverty, broken homes, joblessness and criminal activity. Our drug laws are so draconian that these laws keep our prisons filled with inmates, and a disproportional number of these people are black, even though, drug use and sales are about the same among white people.

This has been going on for decades now and the anger, hurt, resentment and fear have reached a boiling point.

These are things those tools at FOX news and other RW media just don’t, or won’t factor into these questions of why riots are taking place. And when cops routinely kill unarmed black men, the tension that has been building for decades explodes.

I’m amazed that these riots and protests haven’t happened sooner.

I agree; on all points.

In regard to the ‘war on drugs’, I think we are seeing the negative consequences of trying to enforce unpopular laws.
I think that is part of the problem.
Reaching a boiling point is a good way to put it.

A significant point to be made is that black people have two serious impediments: poverty and race. I think that it is a close run thing as to what is a more serious impediment.
Being born poor means that you cannot make any mistakes; in order to make something of yourself you have to strong, persistent, ambitious and lucky. Many poor whites are are in a similar fix as those black people who are born poor.
But, poor white people have a fortunate skin color – blacks do not.
There remains – although I think that it has decreased – a significant amount prejudice against black people.
I am not sure what is more important.

I think that there is a problem with the police culture. It appears to have an ‘us vs them’ mentality. We are ‘the thin blue line’. And, “we do not do anything like civilians”, to quote a police officer that I spoke to. And, there appears to be a code of silence. “Good cops” are silent about “bad cops”

We are, also, dealing with class prejudice. Those conservatives cited in the article, are, also, prejudiced against poor white people.
Being poor is a personal vice.