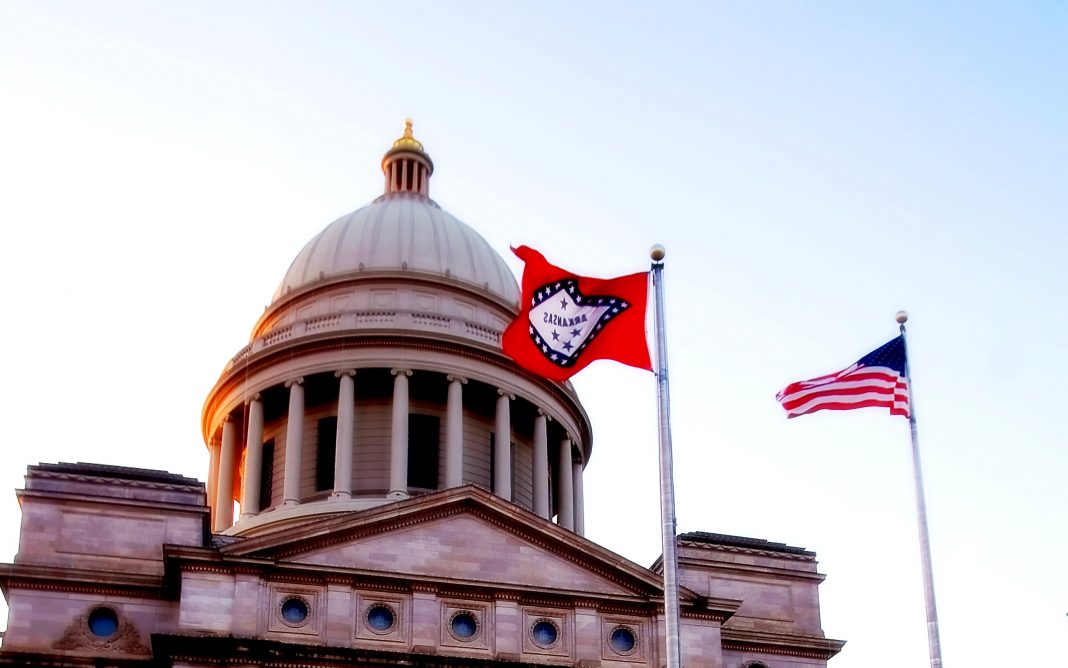 Representative Jeremy Gillam, Speaker of the Arkansas House of Representatives is sponsoring a bill in the state legislature that would provide tax credits exclusively to Christians. Named the, “Respect For Religious Belief” bill,  if passed, it would provide an additional tax credit per individual for those who check the box on their state tax forms that they are practicing Christians.

Rep. Jim Dotson explained why a majority of Republicans in the legislature support this bill, “Many of the problems in our society, the increasing depravity, hatred, violence and division, come from what’s now too big of a separation between church and state. With this bill, we affirm that our religious beliefs are critical to encouraging us to be good people and treating each other as neighbors.”

Responding to charges by opponents that it would embed governmental prejudice against other religions in the state, Rep. Andy Davis protested that the bill did not favor one religion over another.

“The purpose of this bill is to encourage our citizens to study and reflect the positive qualities that are taught in The Bible so we can have a more peaceful, pleasant and harmonious society. Despite the claims of the bill’s detractors, it doesn’t favor one religion over another. No matter which religion you belong to, as long as you study and follow the teachings of the Bible, you can be Jewish, Muslim, Hindu, any religion at all, all Arkansans are eligible for this tax credit,” Davis stated.

Democrats and civil liberty groups have raised the issue of how such a law would be unconstitutional, violating the First Amendment but Gilliam batted away that charge. “The First Amendment says that government can’t make a law establishing a religion or interfering with the free exercise of it. Last I heard, Christianity was already established, and this bill doesn’t prevent anyone from practicing whatever religion they want to. This nation was founded on Christian principles and all we’re doing is rewarding people who respect and follow the principles of America’s founders. What could be more constitutional or patriotic than that?”

The Arkansas House of Representatives is currently considering a slew of amendments to the bill that may make it even more controversial. They include a reduction in criminal penalties on misdemeanor and felony convictions in cases where the defendant is Christian, discounted state and city services for Christians and allowing Christians to use the car pool lane on highways regardless of how many people are in their car.

“Hey, even if they’re driving without any other people in the car, they’re riding with Jesus so they deserve to be in the carpool lane,” Gillam added.

I seriously believed you!!! Thank goodness this isn’t accurate, but I agree with kes that you get inside their heads. There are laws- upheld by SCOTUS no less – in Arizona giving tax credits to conservative Christians for private schools, so you are NOT that far off the mark, AdLib. There is another, also AZ, that wants to make church attendance mandatory. Your spoof is therefore NOT that far from truth!

All I can think is: Jesus wept.

Thanks for a great laugh – even though it was totally scary getting there!

Ad, when I saw the title ‘Arkansas Bill’, I thought for a moment you were talking about the latest in the Clinton Saga!

ppo – That is pretty funny! As mentioned last night on Vox, we’ve got a Bill Clinton, a bill Clinton signed, an Arkansas Bill and an Arkansas bill.

BTW, which one of them is married to Hillary?

😆 It’s a little eerie, AdLib, the way you can get inside their tiny little brains, discern their crazy thought patterns and then put them out there as satire. Then then you re-emerge into the daylight, brush off the cobwebs, and resume your normal rationality and good humor.

This must be the way Stephen King feels too.

And you both deal with the horror genre.

Except the TeaPublicans (I’ve also heard them referred to as “Y’allqaeda.”) are scarier than anything King ever came up with.

Isn’t that the truth, Kes? I was on a thread today and one dude I know to be of Dominion Theology kept insisting it had nothing to do with the bill. When I posted a 7 Mountains blog, bragging about their plans and victories, he slithered away.

I’d have just a bit (a very little bit) more respect for them, Sue, if they’d just say aloud, publicly, what their goals are. But they’re so sneaky. So secretive. That’s the way people act when they’re not really very proud of what they’re doing, but want to have their way regardless.

“Slither” is the perfect word for what one of them would do once you turned the light on him.

Good for you! Nothing like smacking them with their own words!

Thanks so much, Kes, so kind!

It’s actually very easy, I just pick up a big wooden mallet, pound my head with it for 30 minutes and like a miracle, I can channel RW thoughts!

As the old saying goes, dying is easy, comedy is hard and requires a substantial supply of Tylenol.

Hey, AdLib. Looks as if the Arkansas gov read your piece and changed his mind. Well done! 😆

My April Fool’s Day was yesterday, so I cheated and went to the end first. 😉

Kalima, I will take full credit for that (very flattering that he ignored the Walmart CEO’s request that he not sign it and just responded to my parody).

Hey! No cheating and peeking at the end!

You know me far too well.

The credit is all yours because we know that some bright spark, frothing at the mouth, has already suggested it at some obscure “breakfast meeting”. They do so love their breakfast meetings. Like pigs at the trough.

Happy Foolish Republican’s Day to you too!

LOL Adlib you had me going there for a minute ha ha ha
Problem is, I can totally see this happening but not until everyone is comfortable with the “discriminate against LGBT” bill and it’s implementation lol.

That was a good one, I wish I had the knack for satire like you do.

Hey Sue, nice to see you! And thanks so much for the kind words!

I hope I’m not giving them ideas!

They would go there and farther if not for the pushback from the majority. They imagine setting up a theocracy and can get away with a lot around that idea but when they go straight at it, they run into a brick wall of public protest. Glad for that!

Believe me, Adlib, if they thought they could get away with it, they would. People need to be vigilant like we were with Indiana so their shame is out for all the world to see.

Cracks me up, people who I know are of Dominion Theology keep insisting this is not part of the plan of 7 Mountains but when shown the links, they slither off.

I can’t believe they still think we are not aware of their activities. SMH

Again Ad, you may be a profit.

Good April fools joke, but it could well happen.

Which is why it seemed to be true to me, Nirek.

Thanks Nirek! It is the strangest of times when you can create an absurd parody one day then see it become law in a Republican controlled legislature the next!

Yep! Though every time I write an April’s Fools story, it get harder and harder to write something about Repubs that’s beyond what they want to do. Sometimes they actually come true…even the very next day as it did 2 years ago:

House Republicans Ready to Pass “Must Carry” Gun Law for All Americans
http://planetpov.com/2013/04/01/house-republicans-ready-to-pass-must-carry-gun-laws-for-all-americans/

Georgia Town’s New Law Says You Must Have a Gun
http://abcnews.go.com/US/georgia-towns-law-gun/story?id=18863226