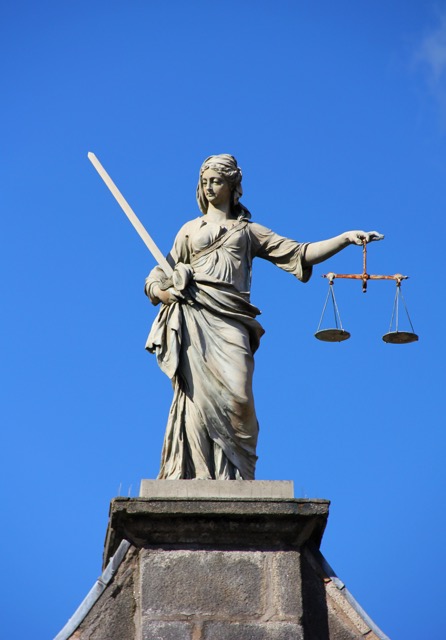 If there were really such a thing as “justice” the bush administration would be in prison, the cop who killed Mike Brown would also be in prison, and Boehner and his bretheren would NOT be in their lofty positions. ISIS would not have a hold on any power. Cuba would be a free democratic country, and the Keystone XL pipeline would not be considered.

The problem is our laws are convoluted at best. There are too many loopholes that let those in power or rich enough to evade the law. When one law is passed they neglect to erase the previous law. A slick “lawyer” (pronounsed liar) can find a loophole for the rich benefactor he/she represents.

How can we fix this problem? It will never happen, but I think the way to do it is to wipe the laws off the books and start fresh. You could also make the laws with clean Bills. No tampering with amendments! Each law should be clear and unambigous. In fact all Bills should be clean. There should not be exceptions or add ons to a Bill. Each law they create should be stand alone. They could pass a new law then disgard the old outdated law. Each time a new law is passed they should disgard old laws that preexisted.

Amendments that change the Bill are fine but to slip something in as an amendment that is unrelated to the Bill is WRONG , in my opinion. I call them add ons. That would stop if the Congress would only have clean Bills to vote on. Congress has been playing games with Bills for years.

If Congress did as I suggest the Courts would not have to wade through all the old laws that are still on the books. There is too much power given to the Supreme Court.

What do you think about “justice”? Do you think we should remove old laws that are on the books? Should the Congress allow amendments to Bills that have nothing to do with the subject?  What do you think? Lets have a conversation.

I absolutely agree that when a new law is passed that affects the whole country, the old laws that some abuse, should be taken off the list. If your car breaks down but you are fond if it so decide to keep it in your garage, where do you park the new one unless you are Mitt Romney?

However, it depends on the new laws, who made them, and for what purpose. If someone like Rand Paul were to be the president, (heaven forbid), he would most certainly tamper with the Civil Rights Act to take your country back to the 60’s, and because your SC can’t be trusted to make the right decisions, let’s pray that there will never be a Republican controlled WH and Congress at the same time in the near future, and vote in all elections to make sure it doesn’t happen.