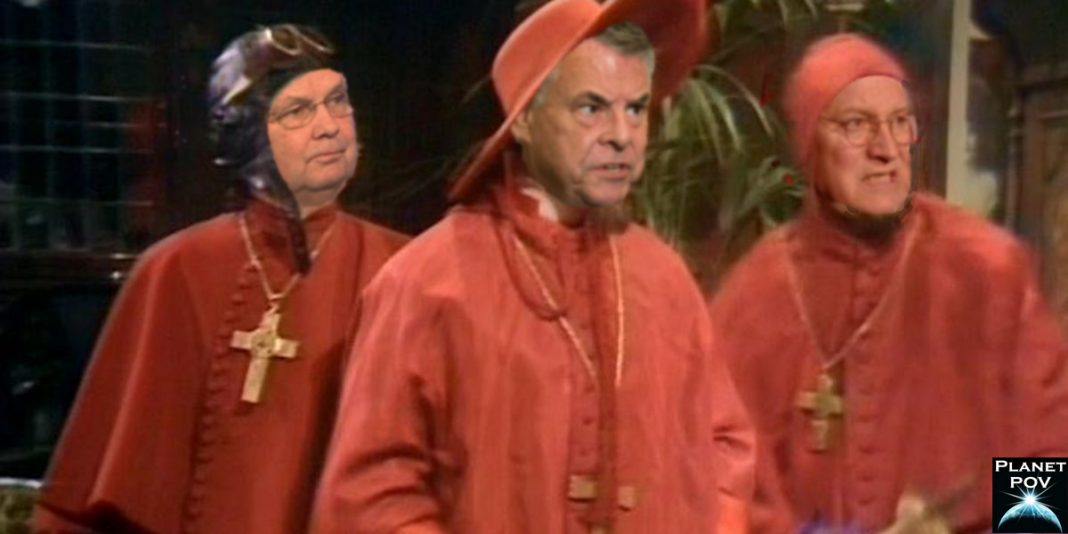 REPUBLICANS CLAIM INQUISITION WAS NOT TORTURE

A damning report was released today by a committee formed by regent Maria Christina of The Two Sicilies, that revealed the extent of torture that had been conducted during The Spanish Inquisition.

The revelations were immediately met by protests and repudiations by Republicans who argued that the information in the report was faulty, claiming that there was no torture but just “enhanced inquisitional procedures” and that they yielded actionable information in any case that justified their use.

Future Vice President of the United States, Dick Cheney, called upon his years of service as a diplomat to call the report “full of crap” and proclaimed that the actions that took place under the Inquisition protected Spain.

“You have to remember, this was a time when Christianity in Spain was under terrorist threat by Muslim extremists, the steps that were taken were the right ones to protect Spain from having the first 9/11. It didn’t happen to them which is a testimony to the effectiveness of this program,” Cheney squawked.

When reminded that Jews were also persecuted during the Inquisition, Cheney argued, “Enhanced Inquisition was only used to help Jews voluntarily convert to Christianity, which they usually and happily did soon after their inquisition started so the amount of inquisition was negligible.”

House Republican member, Peter King of New York, completely rejected the characterization of the Inquisition as torture. “The Inquisition was forbidden from permanently harming or drawing blood so how could anything they did be called torture? So some Muslims or Jews were tied up a little and suspended from the ceiling with their hands tied behind their backs, you can buy something today at Brookstone that does pretty much the same thing. Are you trying to say that Brookstone is torturing people?”

King went on to defend these practices by saying, “Some less informed people are also complaining about the procedure called The Toca, where a cloth was put into the mouth of the prisoner being questioned and water was poured from a jar into it to give them the experience of drowning. Americans in the future might look at such a procedure as too horrible and medieval to be acceptable but pouring a little water on a Muslim to protect a nation is a small price to pay.”

When confronted with the report’s conclusion that the confessions that were obtained through The Inquisition were typically unreliable and didn’t produce any actionable intelligence against Satan, King laid on the ground and remarkably bent both of his legs back behind his head before replying, “I think my position is clear with the public.”

The subject matter was far from funny, but Monty Python made it so. Seeing Cheney’s ugly mug next to King’s was hilarious, but who is the creep on the left? McTurtle?

They can protest all they want to but it doesn’t alter the fact of who they are and what they think. As this continues, the cheerleaders and their kings will be condemned by most and revered only by those who have difficultty wiping their own arses.

It’s out there America, now show how much it sickens you and make sure that the scum responsible is never allowed to forget what they did, and how they shamed you as a nation.

The only way to keep this and the issue of blatant racism in the U.S. alive, is to make sure that you keep talking about it and contact your people in Congress to tell them how you feel about these issues. If they can’t or won’t help you, sack them as soon as you can.

“Torture is not confusing at all. The stench of the vomit and blood and urine and feces expelled by its victims, and their wrenching cries for mercy or death, are clear evidence that abomination is working its evil will.

No one can deny, or claim ignorance, of its stain.

And its stain upon America will never be erased.

There are some things that you can never take back.”
SearingTruth

A Future of the Brave

Gives credence to the theory that we are reincarnated until we learned the lessons of the past and correct our behavior. The Rs are going to be coming back around again and again and again…

Yes AdLib,are not societies expected to progress?The R’s are mired(most of them for political reasons) in the dark ages.It is what their brainwashed supporters expect,and greases the skids for the REAL power to lie with the monied and powerful.What situation better shows that than the riders to the spending bill were written by lobbyists?I hope that Elizabeth Warren and enough of the Dems in the House say a resounding NO to the bullshit.It is well past time for the Dems to separate themselves from the stupid ideas the R’s have that hurt the country.I am a little dismayed that the President did not come out a little more forcefully against this.I President is probably playing the hand dealt to him the way he thinks is best.Let’s see what happens