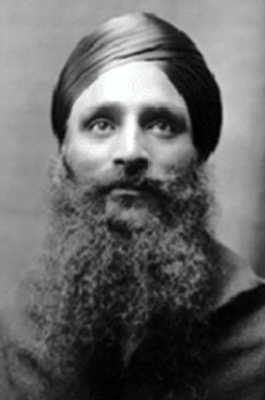 The shootings at the Oak Creek Gurdwara reminded me of the story of Bhagat Singh Thind who could be fairly described as the man who caused the United States Supreme Court to define White in the same way that inspired the murderous Wade Page.

Bhagat Singh Thind, a native of Punjab, immigrated to Americain 1913. Working in an Oregon lumber mill he paid his way through  University of California, Berkeley and enlisted in the United States Army in 1917, when the United States entered World War I. He was honorably discharged in 1918. In 1920 he applied for citizenship and was approved by the U.S. District Court. The Bureau of Naturalization appealed the case, which made its way to the Supreme Court. Thind’s attorneys expected a favorable decision since the year before in the Ozawa ruling the same Court had declared Caucasians eligible for citizenship and Thind, as most North Indians, was clearly Caucasian.

A sensible argument, if American racism made sense or you were confused what was meant in Ozawa. Any confusion in the Ozawa case was swiftly cleared in this decision.

Associate Justice George Sutherland found that, while Thind, an Asian Indian, may claim to have “purity of Aryan blood” due to being “born in Village Taragarh Talawa,near Jandiala Guru, Amritsar, Punjab” and having “high caste” status; he was not Caucasian in the “common understanding”, so he could not be included in the “statutory category as white persons” George Sutherland wrote in his summary:

The eligibility of this applicant for citizenship is based on the sole fact that he is of high caste Hindu stock, born in Punjab [Amrit Sar], one of the extreme northwestern districts of India, and classified by certain scientific authorities as of the Caucasian or Aryan race…In the Punjab and Rajputana [Rajasthan], while the invaders seem to have met with more success in the effort to preserve their racial purity, intermarriages did occur producing an intermingling of the two and destroying to a greater or less degree the purity of the “Aryan” blood. The rules of caste, while calculated to prevent this intermixture, seem not to have been entirely successful…the given group [Asian Indian] cannot be properly assigned to any of the enumerated grand racial divisions. The type may have been so changed by intermixture of blood as to justify an intermediate classification. Something very like this has actually taken place in India. Thus, in Hindustan [India] and Berar [town in India] there was such an intermixture of the “Aryan” invader with the dark-skinned Dravidian.[1]

The Court concluded that “The term ‘Aryan’ has to do with linguistic, and not necessarily with physical characteristics, and it would seem reasonably clear that mere resemblance in language, indicating a common linguistic root buried in remotely ancient soil, is altogether inadequate to prove common racial origin.”

The Singh Thind decision had real consequences to those already nationalized.  Many had their citizenship rescinded.  Sikhs as well as others from the sub-continent  property confiscated and had to live an extremely furtive life hiding land titles in American born children’s hands or relying on trusted White associates.

As our MSM is currently asking Sikhs to justify their existence in our country as good non Muslims something kept tickling me to remember.  Sikhs have fought and suffered for the American dream every bit as much as other minorities in this nation and have experienced the same hate.  I’m no longer interested in people like AC Cooper being fascinated by the flag in a Sikhs front yard as if they need prove their American bona fides.  They don’t have to prove themselves to America, America needs to prove itself to them.

Or as Romney calls the the Sikh people; “Sheikhs”.

Very informative and poignant article. Sorry or the little political jab at Romney. I couldn’t help myself.

Adept2u, thanks! Another great example of our (human beings) tribalism gone to extremes – from just plain silliness in differentiating ourselves from “others” to justifying the “need” to kill each other off. I just wish we could re-program our species to become blind to the characteristics of the “other” which separate us, and allow ALL of us to see the reality that we all emerged as, and still are, “one”.

Thanks so much for posting this, Adept2u. I hadn’t heard of this case, and like so many situations that involve trying to define race — the terms end up being ludicrous, don’t they?

For example, why was it perfectly acceptable for Singh to serve in the military if he was too “inferior” to be a citizen? And what about the fact that freed slaves were citizens in the early 20th century? Did they meet the court’s definition of Caucasian?

You’re right. America owes a lot to the Sikhs.

I’ve apparently lost the ability to write in Gurmukhi since my reboot, so I’ll just say it in Roman.

Hey, if anything is gonna come out of this tragedy, at least it may mean that I’m not one of the only people outside the Desi community to actually know what a Sikh is. They also have a similar immigration experience in Canada. They were one of the first communities to really settle and farm in British Columbia and the Western Provinces of Canada, sometimes by way of Hong Kong and such, where they had served in the famed Sikh British regiments.

Khirad: Did you know there is a Sikh community – WELCOMED – in Afghanistan? I didn’t, until last year. They are the most excellent doctors, according to several of the children. And they are welcomed lovingly, in the Islamic Republic of AFG. Huh.

I was vaguely aware of that. Nice, since they’ve suffered in Pakistan as explored in more than a couple films.

Adept2u, thank you for this. We have family in Wisconsin and have watched this state dissemble over the last two years into highly charged anger. My family is first generation and coming from a northern European country after WWII, any accent that sounded Germanic was greeted with suspicion. I think being called an alien was the worst.

Perhaps the 911 bombings, as well as the GOP’s use of polarizing religious beliefs, will cause enough hatred so that we will finally have to confront this as a worldwide multicultural issue. And even better, perhaps address the inequities perpetrated by the rich on the poor.