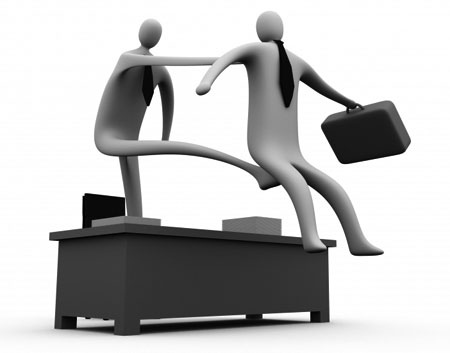 Say for example you were running a business and you had a bunch of employees. Let’s say that some of these employees (about half of them) started disrupting the workplace. Nothing too big at first: something like wearing too much perfume or playing their music just a little too loudly. Maybe these first few signs of unpleasant behavior were meant to be provocative. Yet, as a fair minded employer and governed by certain laws and regulations you find yourself having to talk to some of these folks and remind them that you all need to get along and that the company’s business is a priority.

Much to your surprise you discover that your counseling session with the “mavericks” has not ameliorated the situation: it has seemingly aggravated it. Furthermore, you discover that a few more of your employees have begun to engage in provocative behavior. You find that there is a lot of spit littering the entrances, cigarette butts are no longer finding their way into the coffee cans, the picnic table out in the break area is being vandalized with carved slogans and symbols, car doors are getting dinged and scratched and so on. Moreover, your CFO is reporting that your bottom line isn’t looking too good and it isn’t the market or the economy. Your company’s troubles seem to be a result of some internal problem but that’s just the beginning of your woes. You’ve just got a letter from the property owner of your building telling you that other tenants in the building are upset with what is happening on your floor.

Well, I’ve seen this happen before in my workplace. I saw similar things sprout up from time to time in the Marines. Every time this sort of thing happened one of two things happened: 1) the company failed or 2) some asses got kicked. Now in the Marines, it was simple: one day the Major has a special company formation and lays down the law. A few days later some examples are made. The troops get the message and for the most part life returns to normal (normal being subjective). On the civilian side of the world the same sort of thing happens more or less.

Now let me ask this: why do the Republican still have their jobs. Seriously, are they not the epitome of a crappy employee?

Vtupe — I really like this post. It seems so simple and common sensical, doesn’t it. But I think choicelady has the answer to your dilemma. The people in the districts are sending these folks to congress. So either the voters need a change of heart, better information to change their minds, or a demographic influx of people with better judgment.

Vitupe, you and Rep. Clyburn are on the same note, here.

I would love to see the following actually happen: the next time one of these bad boys shouts out inappropriately in the House or Senate, security is called pronto and the member is ejected from the room…in cuffs, if necessary. Zero tolerance. I suspect there would be a restoration of decorum in short order.

Same with T partiers on the streets. Start spitting on someone and you go to jail. Period. After all…aren’t they all about law and order, for other people?

The reason the Republicans still have jobs is the reason hedge fund people do – the ones doing the hiring are just like them. The voters in those districts are the ‘hiring’ folks, and they want someone to reflect their will, however narrow and selfish and self-destructive that is. There is no one watching that ‘store’ – the district is self destructing.

I’m trying to recall the party’s turning point. It may have been Dan Quayle. It certainly was Newt and company. It’s when the pseudo-religious drunken frat boys took over the House for sure – the ones who made ol’ Dixiecrats look good. Or at least less bad.

My generation was the epitome in too large part of narcissistic self indulgence, and the Republicans honed that particular bent to a fine way of life. All for me and nothing for you. Image is reality. Personal responsibility – for you, not me.

So the nation DID fire them in 2008, but we couldn’t get them all, so here we are. As long as there are people in the ‘hiring’ position who LIKE that sort of representation, we will have these thugs.

But we got rid of the Dems and Republicans who had done the Red Hunt and cold war and all that. We did have some amazing leadership from both parties in the 70s – Aboureszk, Udall, McCarthy (the good one), on and on along with Percy and some others who were decent and fair.

We CAN fire these dudes, and I rather suspect that over the next few years, we may finally see a change from this lowlife set of bullies. It’s worth working for.

The Republicans, imho, seem to have gone off the rails and they are playing strictly to their base, and that’s a problem for them.

I know several Republican voters, and even they are disgusted, but they will continue to vote Republican because they’ve been Republicans all of their lives, as were their parents, and maybe grandparents.

I know it angers me that these elected officials are refusing to work and disrupting the process, and I didn’t even vote for them, but it just seems wrong that they can continue to collect a paycheck and all the benefits for doing nothing.