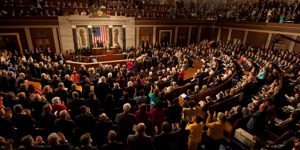 President Obama’s speech tonight was just the prescription Health Care Reform needed and made me remember how he inspired me during the election.

And Republican Rep. Joe Wilson who screamed, “YOU LIE!” in the midst of the speech was just the overdose the GOP needed to go into a coma.

Could it be any more black and white…even literally (the Republican side of the room was middle aged and old white man Heaven)?  Pres. Obama presented a smart, principled and moral approach to treating All Americans with compassion and respect.

And the Republicans scream, “YOU LIE” and deliver a response that is one long list of lies about how reforming health care will kill grannies and how Repubs can somehow insure 47 million Americans just by kicking lawyers in the balls.

In keeping with the health care theme, Pres. Obama and progressives seem to be like the healthy body of the nation, trying to heal, trying to be productive, trying to grow while the GOP seems to be like a virus that is virtually mindless in following its single instinct to attack the host body and usurp its power.

Here is my proposal for Political Health Reform:

1. No Republican can be denied nor deny themselves mental health diagnosis or treatment.

2. A Public Candidate who cheats on his wife, is caught taking bribes and/or secretly has gay sex while railing against gays will always run against Republicans in Republican primaries to encourage competition.

I think the president hit the reset button on the healthcare debate in a way only he could. If you ask me it was his best speech yet because it combined poetry and prose while having the right combative tone of the famous “Enough” speech when he accepted the Democratic nomination.

Some writer on Huffy said Joe Wilson is the poster child of the GOP and that’s true. A party relegated to a power base in the South made of angry white men yelling and lying at the same time.

I agree, the lunacy of August has been perfectly capped and put in perspective by last night though THAT was bipartisan.

Pres. Obama with his genuine concern and thoughtful discussion of a plan to make health care serve all Americans as its priority and Joe Wilson sealing the deal on the GOP being the party of mindless and dishonest hatred.

The GOP today looks like a cult, for wack, unintelligent white men.

The Dems may look a bit stubborn (as their mascot) for wanting to pull reform towards their insurance company contributors or the people but they look like they’re sane and adults.

Even though I have been playing the funeral march for the GOP since they ran McCain/Palin and became rabid racists, for the first time I can truly say that I think the GOP has really jumped the shark.

It will take decades for any moderate people to ever consider the GOP again in national elections and with the passage of health care reform, the Dems will gain as substantially as the GOP will fall.

I’m pleased that last night made the reality of politics in this nation pretty damn clear and confirmed that the 2012 GOP convention will need to be held in Crazytown.

I think the GOP “jumps the shark” every day but this was different because millions saw the spoiled children for themselves.

Hey, we were discussing how the president needed to hit this one out of the park. I think he did just that.

Of course, I had to drive my kid to dance class right in the middle of it. Got back right AFTER the accusations of lies flew.

Gotta look that one up!

Don’t know about Chris Matthews but I got goosebumps hearing him talk about and make the case for a liberal/progressive America.

If Pres. Obama has me and you off the fence, putting criticism aside and gearing up enthusiastically to help bring reform across the finish line, there have got to be many more like us who were disappointed with the way Pres. Obama handled this in August and are elated not to feel that way anymore.

We’re behind you, Mr. President! Let’s get this done!

Barack Obama is a man not to be underestimated or second guessed. I supposed I sound like cheerleader for the president in times where he seems to be falling down on his promises, but his campaigning during the election gave me an idea about who this man is. He cannot be taken lightly or counted out prematurely.