BOSTON (Reuters) – U.S. Senator Edward Kennedy, a towering figure in the Democratic Party who took the helm of one of America’s most fabled political families after two older brothers were assassinated, has died, his family said. He was 77. 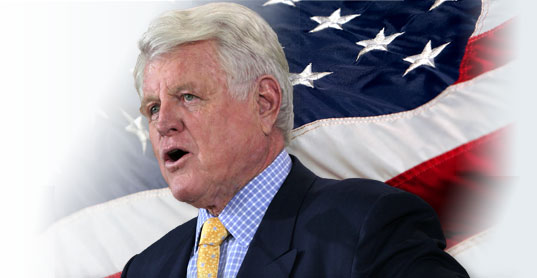 One of the most influential and longest-serving senators in U.S. history — a liberal standard-bearer who was also known as a consummate congressional dealmaker — Kennedy had been battling brain cancer, which was diagnosed in May 2008.

“We’ve lost the irreplaceable center of our family and joyous light in our lives, but the inspiration of his faith, optimism, and perseverance will live on in our hearts forever,” the family statement said.

“He loved this country and devoted his life to serving it. He always believed that our best days were still ahead, but it’s hard to imagine any of them without him,” the family added.

His death marked the twilight of a political dynasty and dealt a blow to Democrats as they seek to answer President Barack Obama’s call for an overhaul of the healthcare system. Kennedy had made healthcare reform his signature cause.”

Sorry I have no words of my own to say right now.

Senator Kennedy’s legislative accomplishments are legendary from civil rights to his work on SCHIP he has always fought for the people.

He was voted into Congress the year I was born and died on my latest birthday. I just have not know life without his presence in Washington fighting for everything that I came to believe in as well.

I come from a second generation Irish American family who had 13 bright red haired children. This is more like losing a favorite uncle that just losing another politician for me. Ted Kennedy was the youngest of 9 and my father is the sole surviving youngest of 13 and obviously this has hit him very hard as well.

We the people now need to be the 100th Senator in Congress. We can never replace the will and compassion of Senator Kennedy but we can fight for what he believed in. We need to fight for healthcare reform of course but we must also fight to put this country back on track for what all the Kennedy’s stood for, fought for and died for. We simply cannot keep on going down the same path of greed and divisiveness and expect different results. We have a leader now who can take us down a new path as long as we fight along side him to stop the absurdity of the mindless opposition in this country that only favors the status quo.

And everything else aside for a moment, happy birthday!

Thanks I have a very nice day actually.

Happy Birthday K, I had no idea or I would have baked a cake. 🙂

😆 I’ve gained 2 kilo by just looking, you bad boy you!

Heh! My evil plan is complete!

Any left?
Just let me find my other shoe and I’ll be over. Hang on, I’m coming! 🙂

Mmmm! Me want your cake!

And I suppose you’ll want to eat it too, right?

Yes, me want cake and me want to eat it too. And me want Medicare but me not want government taking over health care.

Plenty left that’s one of the benefits from not having to deal with those little dirty monsters that kind of look like people but are much smaller.

He continued to make a huge impact on this nation right up until the end. His support of Obama was a big turning point in the election and his commitment to Health Care Reform is the torch that Obama and many other Dems have and will continue to carry.

It is disappointing that he did not live long enough to vote on and pass the legislation that he has been championing for most of his professional life. Still, his passing at this time may be just the inspiration that Dems need to get this bill passed as EK would have wanted, it’s passage could be a tribute to him as well as the right thing to do for all Americans.

In the Senate, they should rename the bill after him.

There are not many politicians in history that cast a shadow as big as his, he was a true and principled liberal and progressive, he will be greatly missed.

My condolences to the people of America and my dear friends. RIP Senator Kennedy.