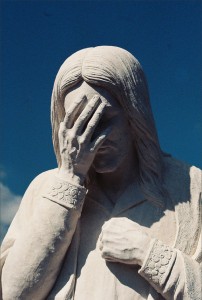 We humbly write to you, our great and omnipotent Lord because we’re not sure you’re aware of what’s been happening lately.

We’ve done everything to follow what you want. We hate all the right people. We promote Christian values especially when we cheat on our wives, get caught taking bribes or “accidentally” shoot someone.

We are pro-life so much we virtually encourage people to kill those who aren’t Pro-Life.

We keep the poor as meek as possible so they can one day be meek enough to inherit the Earth.

And yet, we lost the presidency, our party has declined to 25% of voters, we’re on the brink of becoming a cult and our followers can’t decide if our leader is an obese, offensive recent drug-addict or a woman who shoots wolves from a helicopter and has had an exorcism.

Each week, it seems to be something else, a Republican politician commits adultery, opposes saving childrens’ lives, loses an election he lost six months ago, it just never stops.

So, God, as your official party, though we anxiously await the Rapture to bring all of our members to the big Republican Convention in the Sky (we would still recommend just having Bush appear via satellite), we humbly ask for you to give us all super magical mind control powers or else bring Ronald Reagan back to life.

And not like in those horror movies where they come back but they’re all deteriorated and zombie-like…well, more zombie-like than is typically Republican.