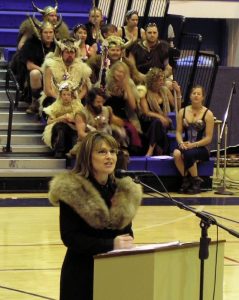 This week’s latest installment in the soap opera of Sarah Palin has given again the opportuinity to reactionaries (the people who detest Bill Clinton or Barack Obama) to again ask in a plaintive voice: “Why are Liberals so hateful toward (whoever) Sarah Palin?    (Next week there will be a new victim.)

This one is not difficult.   During her campaign to bamboozle America into electing her as VP, she repeatedly divided America between “real” (patriotic) America, and that part of the nation that was not outraged that William Ayers walked the earth unmolested and intended to vote for Obama.

No apologies.   Call me a traitor?   Impugn my patriotism?   Declare yourself a more real American than me?

Fuck You.   Fuck you and all that ride in your vile little boat.

What genuinely amuses me is how amateurish and simple-minded she and her transparent facade are.

Two thirds of the nation see her for the lying, incompetent, desperately ambitious, also-ran beauty queen she is. She could never be elected nationally.

And yet, one third of this nation, the most uneducated, intellectually-challenged and gun-clinging ones (see: Remaining Republicans) so hate black people, intelligent people and reason that they cherish her as a national treasure.

I wonder if the original Homo Sapiens had the same problem with Neanderthals when they began to greatly outnumber them.

Or is this just a continuation of that?

The worse part like I said during the election the campaign continues because McCain did not put “Country First”, he put his ambitions first and is still dividing the country. Picking Palin just assured that trolls would continue right wing talking points like they do today.