Home Society Gun Control Don’t Be Fooled, Alex Jones Doesn’t Give a Damn About the Families... 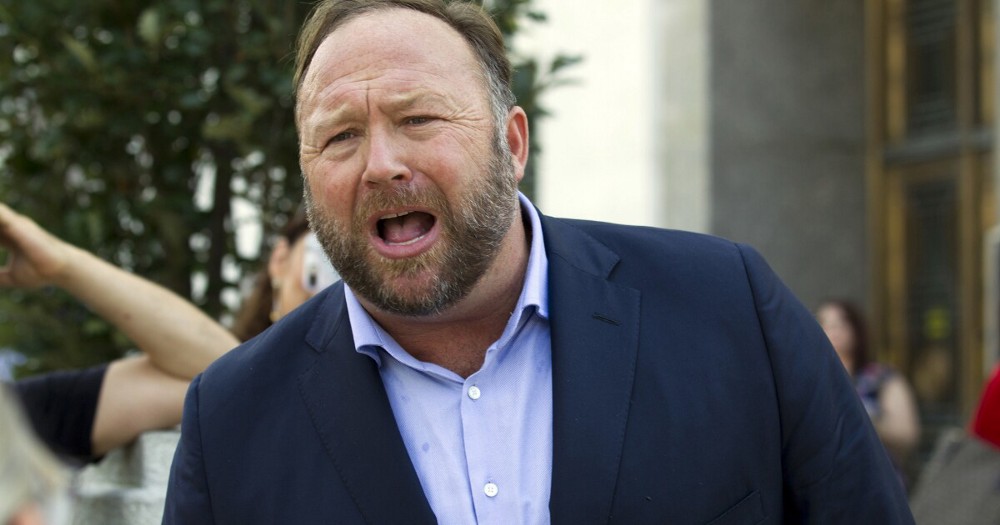 Just before our granddaughter visited us for the first time since the COVID outbreak, she texted me asking if she could bring a stuffed Minions  Character to add to our collection. Of course, I agreed, and I chuckled after our conversation. My granddaughter is fifteen, and you would think her stuff toys phase would have dissipated long ago. But, what’s not to like about these characters created by Pixar? They are funny and lovable in a way. And even though they try to do bad things, they eventually do what is right, unlike the minions who follow Alex Jones.

Alex Jones is a self-absorbed huckster and liar who makes stuff up and prays on the weak and feeble-minded. His listeners, AKA minions,  believe every conspiracy they have heard or read about, seeing them as some nefarious plot concocted by the U.S.  for reasons no sane person would ever understand. Which makes them ever so easy marks for con artists like Jones. Make no mistake, he is a con artist, a fabricator, and an all-out grifter, along with a borderline insurrectionist, and he has made a fortune off of his minions.

So when an 18-year-old with an AR-15 style weapon entered Sandy Hook Elementry school on December 14, 2012, and massacred 6 and 7-year-old children, Jones pounced.

This horrific event was right up his alley and played perfectly into his menagerie of conspiracy theories, jet contrails spreading poison, the U.S. government constructing bunkers to imprison U.S. citizens, and the planes that crashed into the World Trade Center, an inside job by the government.

But with Sandy Hook, Jones went beyond the pale, claiming it didn’t happen. Claiming the parents and children were crisis actors and not real. It was all a well-orchestrated plot by the U.S. government to take away people’s guns and nullify the second amendment as part of the government’s anti-gun movement.

Right on cue, his rabid minions bought his lies. They started a campaign of threats, intimidation, and confrontation. They were relentless, ruthless reprobates steep in the lies and falsehoods Alex Jones perpetuated continuously about Sandy Hook being a false flag operation and the “so-called victims” were crisis actors. For ten years, Alex Jones’s lies put the parents of Sandy Hook through a living hell. While he got richer and richer off the lies, he was spewing.

Jones didn’t give a damn about the harm he was doing. All he cared about was watching his bank accounts get bigger each day as he spewed forth his putrid lies and laughed at how gullible his minions were.

Twenty-six people died at Sandy Hook Elementary School, and twenty were children between 6 and 7. Jones didn’t give a damn. To him, it was a prime opportunity to enrich himself. Spread more propaganda and have his minions wreak havoc which they did abundantly for ten years. The more vicious and brutal, the fatter his bank account grew.

For a moment, just a short moment, place yourself in the shoes of Neil Heslin and Scarlett Lewis, who lost their son Jesse. For ten years, they had to put up with the relentless harassment from Jones’s minions. Calling them, texting them, and even showing up at their home to confront them and demand proof of their son’s death. What kind of person does that? What is their motivation to challenge and question Neil and Scarlett, who had their hearts ripped out on December 14, 2012, about their son Jesse? Who gave them the right to confront these individuals?

Ten years have passed, and finally, Neil and Scarlett, along with other families, are bringing Jones and his minions to heal. Jones has been found guilty of defamation and is going through three trials to determine how much he will have to pay in damages. Neil Heslin and Scarlett Lewis were awarded $4.1 million in compensatory damages on August 4. They await the jury’s decision on what the punitive damages will be. It would not be surprising for the punitive damages number to be relativity high as they are awarded as a form of punishment to let the offender know they shouldn’t have done what they were found guilty of.

In Alex Jones’s case, I’m not sure there is a dollar amount that will ever dissuade, discourage, or deter him from stopping what he has done since he began broadcasting his hate. He believes his recently conceived bankruptcy scheme will protect him from having to pay out much of anything. Jones is the worse kind of human anyone could become. He cares for nothing but money and will do whatever it takes to get it, and he doesn’t care who he harms in the process of enriching himself at the expense of others.

From where Jones sits, he sees Neal Heslin and Scarlett Lewis and the other families suing him as money-grabbing parasites who want to take his hard earn wealth. This is why after the other two trials are completed and compensatory and punitive damages are awarded, Jones will use these verdicts as a rallying cry to his minions as proof what he is selling is true. He will bemoan his current plight with statements that sound remorseful for what he put the Sandy Hook parents through, but there will be a subtle coating of ‘but you know what I told you is true that only his minions will pick up. It will be all they need to rally around him and fork over more money, allowing him to continue on his merry way.

For Neil and Scarlett, the money the jury awards them will help with medical bills and costs for moving along with other things. But, those of you who are parents, you know and understand what they really want.

They and every parent who lost a child at Sandyhook Elementary, Margery Stoneman Douglas High School, and Robb Elementary School want the memories they should have had. But will never have. Why? For the simple reason, Alex Jones, all the wannabe Alex Joneses who traffic in lies and baseless conspiracy lunacy just to make a buck.

The $49.3 million the jury awarded Jesse’s parents in compensatory and punitive damages is a get deal of money. Still, they would give it all away if they could hold him tightly in their arms and never let him go.

But unfortunately for reprobates like Alex Jones, compensatory and punitive damages of any amount will not stop a congenital liar like Jones. He and others like him are amping up their game, and frankly, they don’t give a damn who gets hurt in the process.