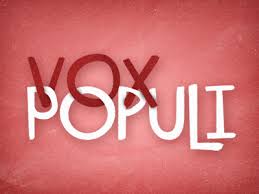 After Christmas, New Years, Democratic victories in GA and takeover of the Senate and an attempted violent coup against the United States by its deranged losing president, we’re still here and so is Vox Populi which begins tonight at 7:00pm PDT. Hope to see you then! AdLib 3 hours ago

Looks like the rwnj really fucked up this time. Harleigh 2 hours ago

How are things? AdLib 2 hours ago

It sure seems like the ceiling is crashing down on Trump now. And helping insure he will be prosecuted. AdLib 2 hours ago

going along ok. still staying in Harleigh 2 hours ago

Same here, staying in mostly and safe…until I can get my vaccinations. AdLib 2 hours ago

Were you surprised Trump finally pulled the trigger on a violent coup? AdLib 2 hours ago

Spanky’s dementia is just about taken over. Thosands will be headed to jail soon… including the rioters. Harleigh 2 hours ago

I would have been surprised if it didn’t happen. It was the center square on my bingo card. Harleigh 2 hours ago

I want to see ALL of those who attacked OUR Capitol, in prison. From the whiniest dumbell to the dumbest muscle heads, men and women, older and teens. They are all equally responsible for a terrorist attack on our democracy and nation. That will scare those cowards from trying it again. AdLib 2 hours ago

totally agree. they are running scared now and getting picked up. Harleigh 2 hours ago

Some of the folks here, including me, were concerned that on Election Day and Inauguration Day, Trump would do this exact thing. Then once he started hyping Jan 6th, it seemed so likely to happen. I didn’t know that the fix would be in though with the Capitol Police Chief to let them in. AdLib 2 hours ago

I thought it would happen but these terrorists would be met with the same police use of force that was used on BLM. But I should have remembered, Trump had control over them. AdLib 2 hours ago

This years Darwin goes to the guy that tazered his balls and died of a heart attack! LMAO Harleigh 2 hours ago

That is pretty funny. Though what about that idiot girl who was crying she was maced by police just for trying to perform a revolution over the government of the the U.S. AdLib 2 hours ago

So many Repubs spend a lot of energy insisting that Dems are elitist for claiming Trumpers are hicks and morons. Then you see them wearing horns, bearskins and all looking like they just came out of a cheap trailer park. AdLib 2 hours ago

They’ll all be crying, the FBI etc is rounding them up and they almost all confessed on social media. hahahaha Harleigh 2 hours ago

You heard Trump has been banned permanently from Twitter? AdLib 2 hours ago

Such idiots, they think that they are entitled to attack the government of the U.S. and then are shocked the government isn’t happy about an attempt to overthrow them and arrests them. Good, they can’t vote in prison, lock them up! AdLib 2 hours ago

oh yeah. now what’ll he do when he takes a shit!?? Harleigh 2 hours ago

He’s going nuts, he tried tweeting on the official POTUS account then was shut down on that too. But he was crazily claiming he would start up his own platform like Twitter. Meanwhile, Parler is being cut off by Apple and Android AdLib 2 hours ago

Google Play that is, already shut out Parler. Apple will in 24 hours. AdLib 2 hours ago

i hope so. about time too whereas before the coup they were saying freedom of speech. thats over. Harleigh 2 hours ago

Exactly. Freedom of Speech doesn’t cover sedition and violence. They haven’t figured that out yet. AdLib 2 hours ago

I love how the rwnj’s are now saying it was antifa! now that just too dumb. Harleigh 2 hours ago

It’s moronic but that’s their only game plan when they get in trouble, blame Antifa. Won’t work this time, way too much video and photos of these morons. AdLib 2 hours ago

wonder which backwater place they’ll try next!? Harleigh 2 hours ago

I think they’ll try to start up another Parler type site but it doesn’t work for Trump to just speak to his cult, he needs to have a bigger audience. AdLib 2 hours ago

For tv, sure, that and OANN but he might want his own tv network. But what chat platform could he get on after this? AdLib 2 hours ago

I want to see him taken away from the WH in a straight jacket. AdLib 2 hours ago

I’ve said dementia for years just like others I’ve known. Harleigh 2 hours ago

Yep, dementia is on display but having a severe paranoid episode is both scary and dangerous with the power he still has. AdLib 2 hours ago

Don’t know about SDNY because they are federal and even though a self-pardon is probably illegal, it would delay prosecution by them. But NY state and GA can really go after him. AdLib 2 hours ago

She got assurances from Gen Milley that Trump won’t have control over the nukes. AdLib 2 hours ago

I love how the GA votes went this round…. now the Senate tiebreaker will be a black woman. lmao Harleigh 2 hours ago

And it looks like impeachment will begin on Monday. AdLib 2 hours ago

And a black man and a Jewish man are now the Senators from GA. That is incredible! AdLib 2 hours ago

Good evening/afternoon everyone. glenn 2 hours ago

Harleigh and Glenn and PPO….if you have not read Ad’s post on the deeper, sinister purposes/aims of the Capital Insurrection…..take a gander. Stunning. MurphTheSurf3 2 hours ago

Murph–Haven’t read it yet, but will be sure to read it after VOX. glenn 2 hours ago

Wow! What a week. Sad for the policeman, Karma for the terrorist who tased his willy and had a heart attack pinkpantheroz 2 hours ago

Thanks for saying that Murph! As bad as it was, it was conceived to be far, far worse! AdLib 2 hours ago

Murph – will read it later. Apparently Pence and others were to be kidnapped and executed pinkpantheroz 2 hours ago

Glenn….I got to meet a lot of Georgia Peaches in the last month plus….2-3 hours on the computer/phone in conversation with potential influencers. It was a fantastic idea and well executed. Our candidates pulled it off. I was SO worried and quite dubious but the GOP did not rise to the challenge and the Dems did. MurphTheSurf3 2 hours ago

They wanted to hold the Congress as hostages, destroy the envelopes with the electoral votes and maybe even execute Dems and even Pence. AdLib 2 hours ago

Ad–I know, ain’t it great? I was really worried for a while; when Ossoff fell behind for a while, but he came back strong! I have to say I laughed at all the ads on TV (it was better than throwing things) when they would say, in this sneering, condescending voice, “If Ossoff and Warner win, the liberals will control Washington.” I’m like, exactly! Yay! Anyway, beyond happy they both won. As you say, a Jew and a black man now represent GA in the United States Senate, and a black woman will be the tie-breaker! glenn 2 hours ago