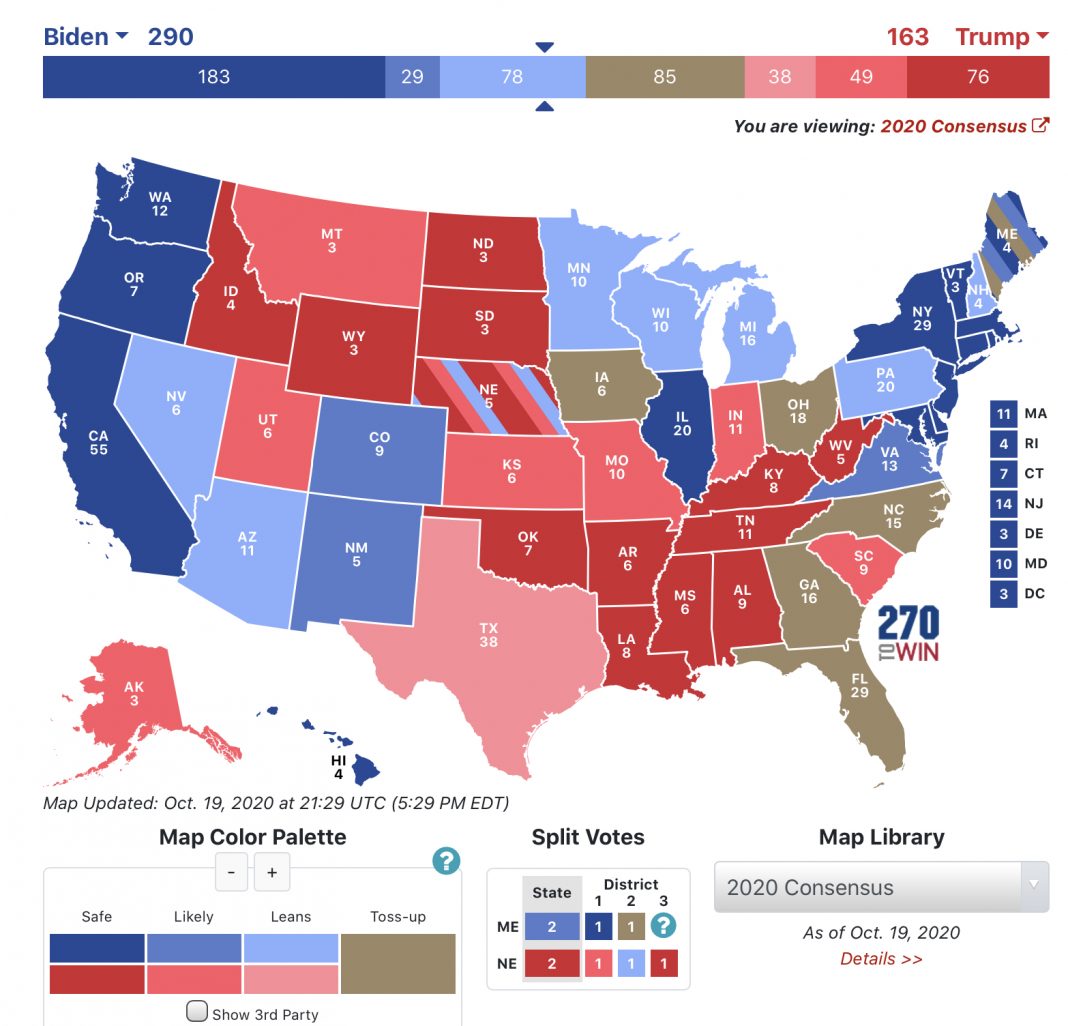 When positive projections are made about Joe Biden’s prospects for winning the White House, there are those who nervously leap to, “Don’t believe polls, we can’t become complacent!”

My view on this is pretty simple, overconfidence can lead to complacency, confidence is a far better motivator for victory than blind fear. If one looks at polls as a trend, not in the specific results of a single poll or day of polling, one can get a picture of what is going on generally and who has an advantage currently.

Joe Biden has averaged a lead of between 6 – 10 points against Donald Trump since polling has been done this entire year. In 2016, Hillary Clinton’s polling average varied markedly and typically had much smaller margins. And even so, she lost the Electoral College by a total of around 80,000 votes over 3 states, less than 1% in each state.

Consider The polling averages below from FiveThirtyEight.com. The first is from 2016, the second is for this year.

Today is 14 days before Election Day and Joe Biden holds a 10.3% over Trump. At this same point in 2016, 14 days before Election Day, Hillary Clinton led by 6%…and the following week was ambushed by James Comey’s announcement of reopening the criminal investigation into her use of a private e-mail server. After that, in the run up to Election Day, Hillary’s lead narrowed substantially to 3% – 4%. She won by around 2% so despite the memes, the polls weren’t off by much.

There won’t be a Comey Effect this time around (though there is a continuing Russian interference that seems to be blocked and exposed a bit more this time). Biden has a much bigger lead over Trump than Hillary and looking at the trend, his lead is on the rise, just the opposite of what happened to Hillary (thanks to Comey).

Biden’s lead only narrowed in mid-April when the “Rally Round The President” effect occurred, as COVID-19 and staying at home were setting in and Americans naturally turned to support their president in taking charge of protecting them (remember, Trump called himself a “wartime president” around this time).

That was a singular and non-repeatable moment in history. The days of looking to Trump to protect Americans from an historic COVID-19 pandemic are permanently behind us. And even then, unlike in 2016, with such a profound event, Trump never led Biden.

Biden’s lead has been stable, Trump is becoming more unhinged and especially after his first debate performance, has been repelling more and more voters away from him and over to Biden’s side.

Now here’s the current story on the electoral map. From 270toWin.com:

As illustrated, just totaling the states where Biden is currently ahead and excluding the toss up states, he exceeds the 270 votes needed to become president.

This is an interactive map so several scenarios were explored, demonstrating why the probability of Biden winning is so high in the estimates of most polling entities.
In this next map, we see what happens if Biden loses Pennsylvania and all tossup states:

Yep, he still wins. Lastly, here is my proposition on where the Electoral College count will end up:

In the above map, Biden wins FL and NC out of the tossup states, in which he currently has nominal leads. The one state that’s hard to award to Biden, though he may win in truth but have it stolen by a corrupt system and political administration, is GA. If he was able to overcome these obstacles, Biden’s final total would be 350 electoral votes.

It is a fact that Trump still has a chance to win. He would have to run the table and win all of the tossup states plus steal a rust belt state from Biden, such as PA, MI or WI. He could also win by taking AZ away from Biden in addition to winning all tossup states.

Looking at the record breaking early voting and higher turnout of minority and younger voters, it seems much more likely that Biden over-performs than Trump, he could even win in additional states such as IA and OH.

Confidence in Biden winning is well justified but it is not a zero sum choice between that and not being complacent.

When a sports team comes out for a championship game, they don’t say to themselves, “Now don’t be confident, you’ll get complacent.” They compete with the confidence that they can win and push themselves to play their best to make that win happen.

The American people should come out between now and Election Day, to early vote, mail in or drop of ballots or vote in person on November 3rd. Come out confident, be your best as a citizen and be a part of this championship team that wins back our country and democracy.

Thanks! I intend to forward this to someone who’s a statistician and still worried that Biden is going to lose.

Cheers Nonpartay! Hope this is affirming for that person. We’re going to win this! As long as everyone votes!