Home Elections 2020 Elections The Power of Propaganda on Display 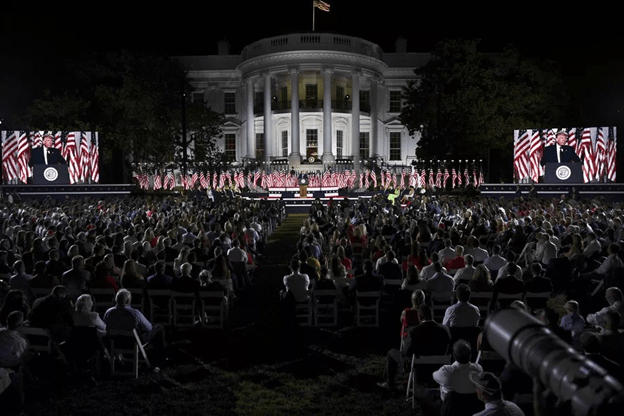 Have you ever seen Vladimir Putin make a dramatic entrance? If not, rewatch last night’s Triumph of the Trump extravaganza. The White House was the backdrop to Trump’s own brand of Nuremberg Rally and the program Triumph of the Will Deux.

As I have noted in another post I think that he has a very good chance of winning a second term. How so? The power of Hyper-Emotionalism, Abject Ignorance, and Overwhelming Sloth. What is needed to overcome them?

Last night Trump and his crew played into and reinforced Hyper-Emotionalism, Abject Ignorance, and Overwhelming Sloth. As I say in my other post…..it worked for Obama twice (and yes, I was a supporter) and it could well work for Trump twice as well.

* Alice Marie Johnson: Johnson was pardoned by Trump as a result of the activism of Kim Kardashian. Her cause was just. She was wrongfully sentenced.  Here is what Johnson said last night: “When President Trump heard about me — about the injustice of my story — he saw me as a person. He had compassion. And he acted. Free in body thanks to President Trump. But free in mind thanks to the almighty God.” Good job, Donald, the right thing to do. But why did you do it? Maybe you had a moment of compassion. But it stands out as an extraordinary exception to your overall record. My suspicion is that you used her and you are still using her.

* Ivanka Trump Ivanka has a light touch — a major change from the shouting and anger of many of the Republican convention speakers. She paints a pleasant picture of “Dad”. Maybe he is that way with her. But….. Still, the intro worked. Something more than a little peculiar……According to Ivanka, she was at her father’s side for virtually every major decision that he has made in his first term. And not just that. She kept saying “we” made this decision or “we” accomplished that. What is her position again and what are her credentials to hold it? Poster child for Nepotism.

* Fear Comes in First: The economy will crash; COVID will rage uncontrolled, mobs will be rioting and looting in your suburb; socialism will triumph…. “Your vote will decide whether we protect law-abiding Americans, or whether we give free rein to violent anarchists, agitators, and criminals who threaten our citizens,” Trump said in his acceptance speech. Fear feeds hyper emotionalism and is a hugely powerful motivator when it comes to voting.

* Donald Trump: Trump made a grand entrance. Trump’s willingness to use his office as a campaign crutch is simply stunning. And something that no other president — Republican or Democrat – has ever dreamt of doing. The Presidency is meant to serve his interests. Audacious but it is working. Hard to miss given the setting. But his acceptance speech was pretty poor. Too long, too flat, too monotone. And from start to finish a retread of his acceptance in 2016 and the inauguration. And it worked. The crowd loved it. His faithful at home undoubtedly approved and it hit all the awful notes he rose to power on.

Repeating long-disproven claims about how he built the greatest economy in the history of the country, how his administration’s response to COVID is the envy of the world, how he has elevated respect for the U.S. in the world, how he has done more for African Americans than any president since Abraham Lincoln. All untrue but it did not matter to his people and that is what counted.  His Theme: “No one will be safe in Biden’s America.” Who did he blame for the messes…the Democrats (Pelosi and Schumer as poster kids). Never mind that he and his party controlled the whole government for the first term and two thirds for the second.

* Social distancing: More than 1,500 people were in the audience on the South Lawn of the White House to hear Trump’s speech. Packed in. Most not wearing masks. Lots of nudging and handshaking and hugging. Trump got his big, enthusiastic crowd. There will likely be a price to be paid for this but not by him.

Unlike the Democratic convention, I did not watch any of the Trump* reality show. Instead, I went out to watch the grass grow, far more informative and entertaining.

However, I did read your running commentary, and for that, I wish to say thank you for putting yourself through what had to be a stomach-churning process.

What you and others have pointed out is something the American public should be extremely concerned about, but I fear they are not. Based on the clips played in various report outs, what was on display was Trump* and all his minions, moving to turn the Republic in a autocratic form of shame democracy. Which is why I feek these words from Julis Ceaser fitting:

“So is he now in execution of any bold or nole enterprise, However he puts on this tardy form. This rudeness is a sauce to his good with, which give men stomach to digest his words. With better appetite.” – Julus Ceaser

Trump* with the display last week, has declared, without uttering the words but with deeds, je suis l’etat – I am the state.