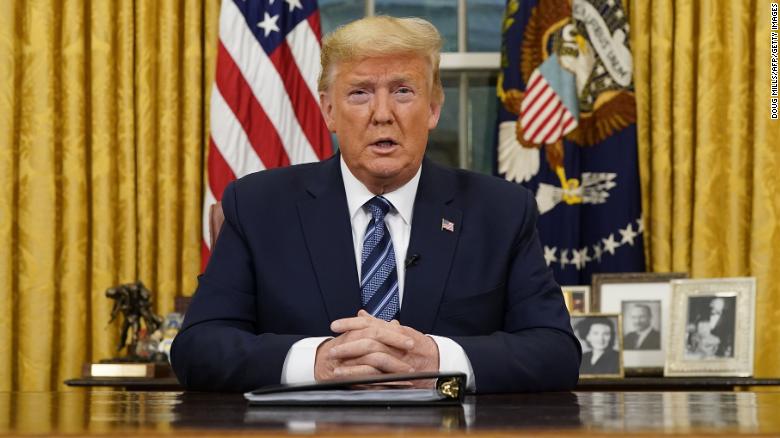 I feel a new kind of hate; or should I call it a new feeling of malevolent purpose and intent mixed with a great sadness. I’ve spent some time thinking about it, and I have realized that my mind has been forced to accept a new definition for “Man,” and that that is a tremendous shock.

In the President’s speech during the White House coronavirus response meeting yesterday, and especially in the prepared statement, I saw something that I had never seen before in a human being. And I came to realize that every monster I’ve ever known was just a story in a book, no matter how real-seeming or frightening. Although my mind couldn’t quite grasp Trump’s words and the deathlike stare at first – there was something too alien, too inhuman about them – the word, “Unconcerned,” stuck in my mind, though it was spoken later. He was unmoved by death. The thought of the deaths of American men, women, and children hardly seemed to occur to him. The potential for total disruption of our culture and our way of life was not mentioned.

It was the coldness of it that was so shocking to me. He had suffered some minor setbacks during the week, and had been forced into compromises, and he was angry that the epidemic might hurt “his” stock market numbers. But he was truly “unconcerned” about the possibility of massive loss of life, or of disruption that we know already is on a scale never before imagined. He wasn’t even cognizant of how much suffering that would mean.

He was been preoccupied and obsessed lately with revenge, and didn’t have a moment to spare to think about saving lives – to do his job. He did say that he: “doesn’t want to see people die.” How gallant!

America is threatened with destruction; and what does our “Leader” do: he decides early on to focus entirely on his crumbling presidency, his criminal empire, and above all his candidacy. He has deserted his post to avoid blame, and when it mattered the most.

I guess everyone has some sort of obsession; mine is using words as weapons. Call me a “Committant,” and show me where to sign my name in blood; because to my dying day, I will fight that monster, that impostor, Donald Trump. Damn him!

And what does that tell you about those who willingly rush to do his bidding?