Home News & Politics Donald Trump Trump Attacked By Bob The Eagle on The 4th of July! 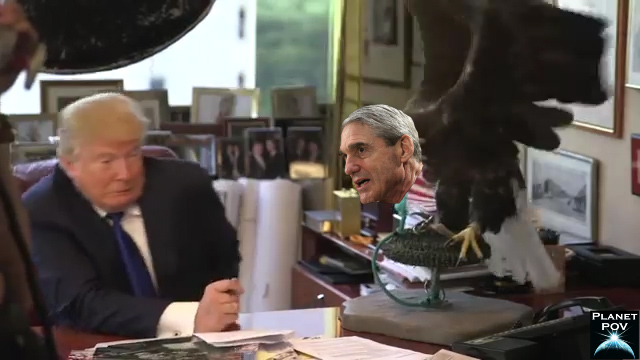 Some may see it as fitting that on July 4th, a day of patriotism, Donald Trump was attacked by Bob The Bald Eagle. This video comes on the heels of Trump trying to fake wrestle CNN. Trump later explained that while he looks like he was flinching and freaking, he was really trying to hold himself back from hurting Bob The Eagle.

Bob had no comment in response but proceeded to make a nest out of Trump’s hair that he plucked and a thick stack of subpoenas.

Here is the exclusive video of Trump cowering from Bob The Eagle:

Happy 4th of July to all from PlanetPOV!

Hilarious, AdLib! (And very “techie” too, as you had only 3 seconds of fast-moving video to work with! Kudos!)

There’s something about the name “Bob the Eagle” (Robert Mueller, of course) — the name itself — that makes it even funnier!

If we lose our senses of humor, we’re really sunk! Just as Chaplin was powerful in opposing Hitler, you (along with other satirists out there) are one of our best weapons against authoritarian thinking. Please keep ’em coming.

Thanks so much, Kes!

I feel the same way, we do need satire to knock would-be dictators from their pedestals.

I don’t know if anyone could ever top the bravery and power of Chaplin’s satire in “The Great Dictator”. It still is fascinating and powerful to me…and even poignant today, especially his final speech:

One of his finest moments. I remember when I first saw this as a youngster, thinking: “Thank goodness those days are over with and we’ll never go through the experience of having to battle another mad authoritarian war-monger!”

That’s one lesson that hopefully Americans and others in the world have learned now, there will always be destructive and greedy enemies of the majority of people and what’s best for them. Such evil can never be defeated, just denied victory at a particular time. It is a neverending war that the majority have to always be prepared to fight. As long we’re human, there will always be those who are dangerous and corrupt, uncaring about the lives of others in their quests to gratify themselves and their egos.

When you strip down the mythos around Hitler and describe him more basically as a sociopathic ultra-nationalist who manipulated his citizens’ desperation, fear and hatred with lies and other used propaganda to reshape his country into a dangerous and aggressive dictatorship…you see many other deranged people like him, to one degree or another, constantly throughout history including today in the US, in Russia, North Korea, etc.

Hitler happened to emerge at the time of a perfect storm thanks to The Depression and post-WWI Germany.

Mentally damaged people who crave power and superiority will always exist and be a threat to the majority of a country and the world.

The majority must always be vigilant, courageous and prepared too stand up against would-be dictators.

I like your video better than the wrestling of CNN, Ad.

Thanks so much, Nirek! It’s funny because it’s true!

Perfect timing, AdLib!! Loved the Robert Mueller face on that eagle. 😆 I imagine he pops up in Donna’s nightmares every night.

In this time of utter chaos, a little parody goes a long way. The chance to laugh, and laugh often is healthy and much needed right now. Thanks!

Thanks Kalima! It just seemed like it touched all the bases, ridiculing Trump’s retweet of that wrestling/CNN video, Trump actually being such a coward, his fear of Mueller’s investigation and a symbol of our nation and freedom on July 4th attacking Trump.

Had to learn how to do that moving Mueller head in a video pretty quickly too but it’s actually not so difficult.

Very glad you enjoyed it!