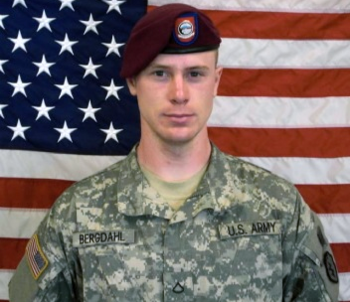 This is my opinion of Sgt. Bergdahl and how he could have been feeling when he walked off the base.

I think he had just seen enough tragic crap and he snapped. When someone who is not really military oriented is in a war zone and sees too much, he can get a case of  “battle fatigue” or “PTSD”.

I know from personal experience that it gets to you. I was taken off duty and put to sleep for 48 hours after being on “listening post two nights in a row and building our bunker during the day. They told me  I had “battle fatigue”. I know I was tired and sick of killing and seeing my friends being killed or wounded.

As far as Sgt. Bergdahl is concerned, I think he should be given the benefit of doubt. We don’t know what he witnessed to make him walk off into the enemy territory. Some soldiers are more attuned to combat while others are less so. I feel that he was overcome by his experience.

Personally, I would like to see him discharged with honor and allowed to live a life of peace. He certainly has suffered more than enough.

That is my opinion, what is yours?

Just because I have an opinion, you can also have one that differs with mine. I don’t mind if you agree or disagree. I just want a conversation.

My benefit of the doubt is the admission from his superior officer that it wasn’t the first time he walked out. He had done it before because exploring the countryside was part of the life he’d always led. No one reprimanded or stopped him. So this time he got caught, and he suffered horribly as a result. He wasn’t fit for military life as, I suspect, anyone from his background would not be. I’m not at all sure he snapped so much as that he was doing what he’d done before. This time it was horrible in its effects. He stayed true to his commitment and tried to escape, but he never should have been in the military to start and should have been prevented from walking out the very first time he did it. It wasn’t an issue of discipline alone – it was his survival. Nobody made that clear to him. He paid a huge price for his naïve assumptions, but some of this is on the heads of those who did not properly train him.

CL, the way you say he was before he joined the Army is very possibly why he felt he could just walk off. There are people who are not cut out for the military.

Hello Nirek. I think the man has suffered enough.

Bowe Bergdahl in his own words

In a statement to Gen. Mark A. Milley, the commanding general of U.S. Army Forces Command at Fort Bragg, Sgt. Bowe Bergdahl describes the conditions of his confinement by the Haqqani network, an insurgent group allied with the Taliban.

Kalima, I agree. I still think the terror of war had something to do with why he walked out into the enemy area.