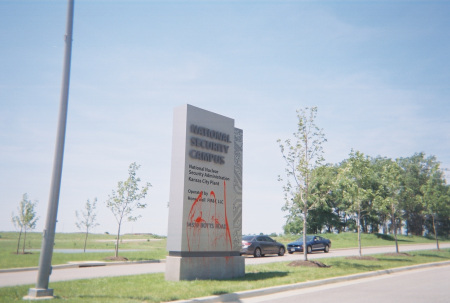 Father Carl Kabat, an 80 year old priest who has spent some 17 years in prison for protesting against war and weapons, spent the Fourth of July spattering red paint across a sign at a Kansas City plant just opened. He is spending this weekend in jail as the officials ruin their holiday weekend figuring out how to charge him. The plant was built for the  National Nuclear Security Administration to make and procure non-nuclear parts for nuclear weapons.  In a phone call to friends at 10:03 a.m., Carl said, “This damned plant has got to be closed somehow, some way.” The complete report on the action is here.

Father Carl is a longtime member of the Plowshares movement and was one of the original ‘Plowshares Eight’. In 1980, Kabat and seven others broke into the King of Prussia GE plant and damaged MX missile parts on the assembly line. The number of actions has ebbed and flowed over the years, but we had another Plowshares action in 2012 called the Transform Now plowshares. Sister Megan Rice, an 85 year old nun, is in prison right now for breaking into the HEUMF facility in Oak Ridge.  Once inside, Sister Megan and her co-conspirators Michael Walli and Greg Boertje-Obed hammered on the building, poured blood in front of the doors, sang hymns and hung up signs for peace.

Beyond what you think about civil disobedience and symbolic disarmament, the US has some 1,950 strategic weapons ready to fire at a moment’s notice; the Russians have 1,800. It wouldn’t take much in the way of misunderstandings for those missiles to fly and start splitting atoms. But instead of whittling down those numbers, the US is embarking on a modernization program that will cost us over $1 trillion over the next few decades. This despite the fact that in 1996 the ICJ declared virtually all use of nuclear weapons contrary to international law.

Meanwhile, there are petition drives to get Sister Megan (and now Father Carl) out of prison. I agree they should be released, but I don’t think that serves them. What they want is for the rest of us to get off our couches and do something about the weapons. We owe it to them to take a stand.

PS: I do a touring play about Father Carl’s most famous protest action. Information here.

You got me looking for this guy. Your narrative is a fine summary of a life given over to conscience driven acts of solidarity and protest…..

This is the last thing I found on him…http://ncronline.org/news/peace-justice/trial-anti-nuclear-activists-ends-unusual-sentence

On December 13, 2013, with five other protesters, Kabat was found guilty of trespassing on the relocated National Nuclear Security Administration’s Kansas City Plant but was given the unusual sentence of writing essay responses to questions posed by the judge

I wonder what he wrote?

There is a fine letter from him here: http://www.nukeresister.org/2011/07/04/fr-carl-kabat-at-kansas-city-plant-construction-site/

I salute you for bringing this story to our attention.

I salute Fr. Carl and his fellow pilgrims for peace in Ploughshares.

I salute all who take principled positions like theirs and put themselves on the front line risking their freedom for the sake of a great truth.

MBX,first off, I have to say that — if you’re doing a touring play about an anti-war activist, you have the wrong name! 😀 That sounds like a pretty good example to me!

With all the news about the recent SCOTUS decision, there’s been a media spotlight on religion this week. And it’s true that toxic religion is a huge national (worldwide?) problem. But then there are the Fr. Carls and the Sr. Megans and the Francis Schaeffers and Jim Wallises of the country. They’re not rich and they’re not very well-known (compared to Pat Robertson anyway), but they “fight the good fight.”

One of the Sisters of Mercy near here went to prison for trespassing in protest at the School of the Americas (a torture training center in Georgia). After she was released, she said the worst thing was the complete lack of privacy. I’ve often thought about that since I heard her say it. We take for granted that we will have privacy in the shower and in dressing and undressing. She lost all of that for six months.

But Father Carl lost it for 17 years. That’s an incredible sacrifice; and all done in the name of peace. God bless the Father
Carls of the world.

MBX, I stand with you and the Father and Sister for peace. We have too many weapons as it is.

I second that emotion.