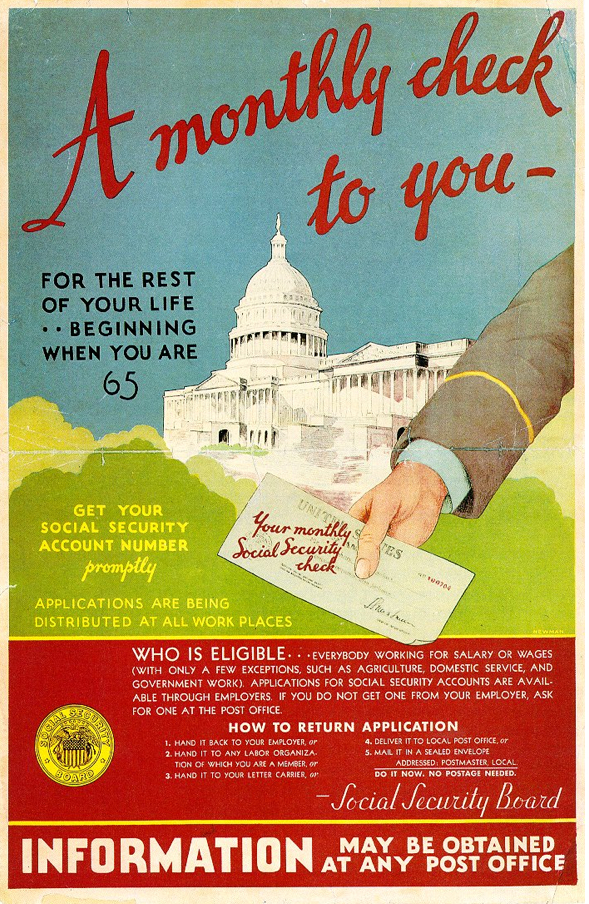 There is a difference between the debt and the deficit.

Both Social Security & Medicare can and do contribute to the DEFICIT, but not the DEBT. These items should absolutely be off the table in these discussions because they really do NOT represent anything relevant.

Any attempt to delude the public otherwise is just that, delusional. Social Security and medicare BY LAW, cannot possibly contribute to the debt… so to lump them in with debt discussions is worse than apples and oranges.

They DO contribute to the deficit however, but the MANNER in which they do so is NEVER discussed or made clear. Any surplus from either of these programs is invested in SPECIFIC TYPES of TREASURY BONDS, available to no other part of the government.  BOTH represent INTRA-GOVERNMENTAL debt (not INTER-GOVERNMENTAL debt, which we owe to other countries).

These bonds, through a quirk of accounting, represent liabilities, because they are a future promise to pay.  They are bonds that are ALREADY BOUGHT & PAID FOR.  They represent a debt the same way your savings account (remember those?) represents a debt by the bank to pay you your money when it is demanded.  You have already paid for it, and in agreement for allowing the bank to use it to invest, you are paid interest.

This is only a problem if the bank decides to take your money and lose it all at the roulette tables.  Either way, it’s not YOUR problem, it’s theirs.

This is why the government banks this surplus as bonds.  It keeps the surplus secure, and the owners of the surplus, namely the Social Security and Medicare recipients who are getting their own money back, know that the money to pay them will always be there.

The deficit is the difference between the amount of money taken in by the government, (i.e., receipts) and what the government has to pay out, called OUTLAYS.  The money that is then borrowed by the Treasury to pay the government’s bills, such as bonds sold to investors, along with the bonds sold to the government trust funds, the intra-governmental debt. All combine to become part of the NATIONAL DEBT…. which essentially represents ACCUMULATED DEFICITS.

It would NOT be a good thing to have NO DEFICITS at all because that would mean that the government trusts funds have NO SURPLUSES TO INVEST IN BONDS.  Roughly 18% of our current total debt is the result of the surpluses run by Social Security and Medicare at the present moment.

Plugging tax loopholes on the other hand, is important to the discussion.  So is the repeal / expiration of the ruinous Bush tax cuts, the repeal of oil subsidies, subsidies to agribusiness and the pharmaceutical industry.

The reason the rest of the world gets their medications at a reasonable rate for their people is because the pharmaceutical companies come back to the U.S., knowing that they can stick it to the American taxpayer to get the rest of the money they think they are due.  Hence we get one of the most boneheaded contracts EVER, “Medicare part D”, in which the United States gave away 100000% of its bargaining power and agreed to pay the HIGHEST POSSIBLE RATE for covered medications, along with prohibiting the consumer from importing cheaper medications.

This was nothing but a blatant giveaway to the pharmaceutical companies and is one of the major reasons Medicare is now struggling financially. Medicare part D should have been called “Welfare for Pfizer”.  It was set up specifically to milk that trust fund dry and give it away to big business.  It honestly has to be one of the most ridiculous frauds ever perpetrated on the American People.

The core programs of Medicare A as it was originally set up, cannot.  Like Social Security, it is a trust fund whose surplus is invested in BONDS.

Here’s a REALITY CHECK as to the TRUE FACTS regarding Social Security (from MoveOn.com):

Reality: There is NO Social Security crisis. By 2023, Social Security will have a $4.6 TRILLION SURPLUS (yes, trillion with a ‘T’). It can pay out ALL SCHEDULED BENEFITS for the next quarter-century with NO CHANGES WHATSOEVER.

After 2037, it’ll STILL be able to pay out 75% OF SCHEDULED BENEFITS—and again, that’s without any changes. The program started preparing for the Baby Boomers’ retirement decades ago.

Anyone who insists Social Security is broke probably wants to BREAK IT THEMSELVES.

Myth #2: “WE HAVE TO RAISE THE RETIREMENT AGE BECAUSE PEOPLE ARE LIVING LONGER”.

Reality: This is a RED-HERRING to trick you into agreeing to BENEFIT CUTS. Retirees are living about the same amount of time as they were in the 1930s.

The reason average life expectancy is higher is mostly because many fewer people DIE AS CHILDREN than they did 70 years ago. What’s more, what gains there have been are distributed VERY UNEVENLY—since 1972, life expectancy increased by 6.5 years for workers in the TOP HALF OF THE INCOME BRACKETS, but by LESS THAN 2 YEARS FOR THOSE IN THE BOTTOM HALF.

But those intent on cutting Social Security love this argument because RAISING THE RETIREMENT AGE is the SAME AS AN ACROSS-THE-BOARD BENEFIT CUT.

Myth #3: “BENEFIT CUTS ARE THE ONLY WAY TO FIX SOCIAL SECURITY”.

Reality: Sorry.. but Social Security DOESN’T NEED TO BE FIXED, if we want to STRENGTHEN IT, here’s a better way: MAKE THE RICH PAY THEIR FAIR SHARE.

If the very rich paid taxes on ALL of their income, Social Security would be sustainable for decades to come. Right now, high earners only pay Social Security taxes on the FIRST $106,000 OF THEIR INCOME, but conservatives insist benefit cuts are the only way BECAUSE THEY WANT TO PROTECT THE SUPER-RICH FROM PAYING THEIR FAIR SHARE.

Myth #4: “THE SOCIAL SECURITY TRUST FUND HAS BEEN RAIDED AND IS FULL OF IOUS”.

Reality: Not even CLOSE to true. Again, the Social Security Trust Fund isn’t full of IOUs, it’s full of INTEREST BEARING U.S. TREASURY BONDS AVAILABLE ONLY TO THE SOCIAL SECURITY TRUST TO PURCHASE. THOSE Bonds are GUARANTEED and backed by the full faith and credit of the United States (at least for now).

The reason Social Security holds only treasury bonds is the same reason many Americans do: THE FEDERAL GOVERNMENT HAS NEVER MISSED A SINGLE INTEREST PAYMENT ON ITS DEBTS in it’s ENTIRE 235 year history (unless the republicans get their way).

President Bush wanted to put Social Security funds in the stock market—which would have been disastrous—but luckily, he failed. So the trillions of dollars in the Social Security Trust Fund, which are SEPARATE FROM THE REGULAR BUDGET, are as SAFE AS CAN BE (unless the republicans get their way).

By LAW, Social Security’s funds are SEPARATE FROM THE BUDGET, and it MUST PAY ITS OWN WAY. That means that Social Security CAN’T ADD ONE PENNY TO THE DEBT.