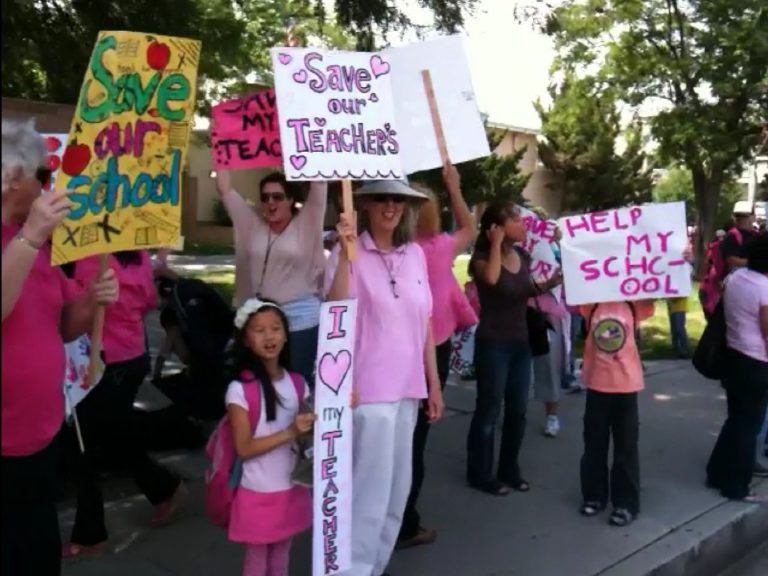 Last Friday, there were State of Emergency rallies at most Los Angeles schools to protest the looming cuts to education in the city which will bring class sizes up to 29 for grades 1st-3rd and 38 children per classroom for 4th and 5th.

I attended one of these rallies and shot the following video:

California is a terribly dysfunctional state. With the passage of Proposition 13 and handcuffing the legislature with the requirement of a 2/3 vote on any tax increases, in a devastating recession like this there is little recourse to be able to add revenues so all that’s left is to cut.

There may be fat our there to be cut but historically, it has been difficult to find and in any case would only address a small portion of the state’s budget gap. As with most states, education is the primary expense of a state so that’s what has to bear the brunt of cuts.

There comes a point, whether in a state or country, where the budget surgery performed could be a success but the patient dies. States have to balance their budgets, they can’t run deficits or print money.

If the only way one can fit in a car is by lopping one’s own head off, it kind of defeats the purpose of going out for nachos. Just as is being discussed with the federal budget, there is only so far that cutting can go to address budget shortfalls without causing more profound harm, so there comes a time where revenues must also be increased.

The right wing, as Grover Norquist famously said, wants to shrink government  “down to the size where we can drown it in the bathtub.”

All is going according to plan for them. Even though the majority of Americans WANT higher taxes on the wealthy and corporations, the RW just repeats the mantra of “We won’t raise taxes!” and they have so far been successful in thwarting the will of the people, spiting it for that matter.

Instead of the outrage of making Exxon pay more than the $0 they paid in taxes last year, the Repubs happily vote near-unanimously to kill Medicare.

The Repubs, serving their corporate masters, have the same approach to government, health care, education and democracy…shrink it until it’s small enough to drown in a bathtub. That’s the “pro-life” party, for ya.

One ray of light in today’s news, the state has had an unexpected spike of $6.6 billion in revenues which mitigate close to half of CA’s budget shortfall, much of that statutorily has to go to education.

We’re keeping our fingers crossed here in Cali and hope that a solid recovery will lift all boats.