Why Wouldn’t the Tea Party Shut It Down?

NO one remembers anything in America, especially in Washington, so the history of the Great Government Shutdown of 1995 is being rewritten with impunity by Republicans flirting with a Great Government Shutdown of 2011. The bottom line of the revisionist spin is this: that 2011 is no 1995. Should the unthinkable occur on some coming budget D-Day — or perhaps when the deadline to raise the federal debt ceiling arrives this spring — the G.O.P. is cocksure that it can pin the debacle on the Democrats.

[T]he Tea Party radicals might have figured out the single biggest difference between 1995 and 2011 — the state of the economy. Last time around, America was more or less humming along with an unemployment rate of 5.6 percent. This time we are still digging out of the worst financial disaster since the Great Depression, with an unemployment rate of 9 percent and oil prices on the rise. To even toy with shutting down the government in this uncertain climate is to risk destabilizing the nascent recovery, with those in need of the government safety net (including 43 million Americans on food stamps) doing most of the suffering.

Not that the gravity of this moment will necessarily stop the right from using the same playbook as last time. Still heady with hubris from the midterms — and having persuaded themselves that Gingrich’s 1995 history can’t possibly repeat itself — radical Republicans are convinced that deficit-addled voters are on their side no matter what. The president, meanwhile, is playing his cards close to his vest. Let’s hope he knows that he, not the speaker, is the player holding a full house, and that he will tell the country in no uncertain terms that much more than money is on the table.

Saturday’s marchers in Wisconsin got a boost from Labor Secretary Hilda Solis, who said Wisconsin Governor Scott Walker and Ohio Governor John Kasich, who also wants to cut collective bargaining rights, “aren’t just asking workers to tighten their belts, they’re demanding they give up their uniquely American rights as workers.”

An estimated 1,000 union workers carrying signs and chanting “people power” gathered at the Colorado state Capitol in support of Wisconsin public employees who face the elimination of their bargaining rights.

Two raucous competing rallies over the union fight drew more than 2,000 people in freezing temperatures to Olympia, Wash., Saturday. The pro-union rally was the bigger of the two, with more than half a dozen unions sending members. They sang songs and held signs that said “Solidarity With Wisconsin” and “Unions Make Us Strong.”

Hundreds of Kansas labor union members and supporters rallied outside the Statehouse against what they see as political attacks on workers.

Participants in Vermont and New Hampshire labor rallies in support of Wisconsin workers said Saturday the existence of unions benefits the middle class.

Protests have spread to Ohio, Indiana, and on Friday to New Jersey, where thousands came out in support of Wisconsin workers.

In Providence, Rhode Island – where the school committee is currently facing a $40 million budget deficit – the school board voted in favor of sending termination letters to the city’s nearly 2,000 city teachers. The mayor insists not every teacher will lose their job.

Several thousand protesters gathered in New York City and Los Angeles, about 1,000 people turned out in Chicago, Denver and Columbus, Ohio, several hundred rallied in Austin, Texas, and about 100 people joined a protest in Miami.

[No coverage of Texas rallies in any Texas news source]

[No news on the Google about the rally from Arizona, Utah, Wyoming, Oklahoma, Montana, Arkansas, Louisiana, Mississippi, South Carolina.]

And the STUPIDEST headline of all:

Obama a No-Show at Labor Rallies

Sorry for this link, but all other sites link to it.

AND IN OTHER NEWS

QUOTE OF THE DAY:

“Not all of us can do great things. But we can do small things with great love.”
— Mother Teresa

Thanks for your post! Couldn’t help but wonder if that was one of your paintings?

Hi grans! Glad you liked it. But no, the artwork is not mine. I would announce it if it was –I’m not that humble! 🙂

What really pisses me off is that the deficit reduction crowd who have 0, nada, understanding of MACRO ECONOMICS and how are economy actually works, are able to exert such influence on matters so important to our nation!!

Abby, you keep forgetting. Orwellian-Keynesian economics “proves” that the more you reduce revenue, the less your deficit is.

The more you reduce money put *into* the economy, the more money the economy has in it!

That’s why we are reducing taxes (revenue for the government), fees (ibid), and social “safety net” programs (money put into the economy).

Everyone who manages to survive the next couple years will thank us for it. From their gated communities with gun towers placed every five yards around the perimeter.

Thanks Cher….I was waiting for your wrap up column! I always appreciate your links! 🙂 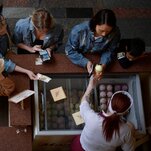